1) Allocating labor to capital in the interests of economic production

By and large, the free labor market in most advanced economies has performed these functions well in the seventy years or so. Skills have been matched to capital, producing (over the long run) dramatic increases in economic output. Paid jobs have provided a social anchor for men (and now women), packaging purposeful work into manageable pieces. And until recently, wages have proved a successful mechanism for sharing the proceeds of growth.

This long record of success shapes almost every social and economic policy debate. To tackle poverty, we must get people into jobs. To lift economic productivity, we must boost skills. To reduce income inequality, we need to narrow the wage gap. And so on. In every case, and whether from the political left or right, the goal is to improve the labor market.

The labor market continues to work pretty well as an economic institution, matching labor to capital, for production. But it is no longer working so well as a social institution for distribution. Structural changes in the economy, in particular skills-biased technological change, mean that the wages of less-productive workers are dropping. At the same time, the share of national income going to labor rather than capital is dropping.

This decoupling of the economic and social functions of the labor market poses a stark policy challenge. Well-intentioned attempts to improve the social performance of the labor market – through higher minimum wages, profit-sharing schemes, training and education – may not be enough; a series of sticking leaky band-aids over a growing gaping wound.

This is why the idea of a universal basic income (UBI) is capturing the imagination and attention of policy intellectuals, across the globe and across the political spectrum. If the labor market is no longer going to cut it in terms of distribution, it might be time for more radical solutions. The Swiss are holding a referendum on the idea in June. In the UK, the Royal Society of Arts, Manufactures and Commerce is leading a major new project on a British UBI.

As Michael Howard, coordinator of the U.S. Basic Income Guarantee Network, told Newsweek magazine: “We may find ourselves going into the future with fewer jobs for everybody. So as a society, we need to think about partially decoupling income from employment.

The idea is now gaining traction among U.S. libertarians from the Cato Institute, led by Matt Zwolinski, social conservatives like Charles Murray from the American Enterprise Institute, and left-wingers like Matt Bruenig and Elizabeth Stoker. This June, the former President of the SEIU union, Andy Stern, is publishing a book, Raising the Floor, arguing for a UBI. After five years of study and conversations, Stern has decided that “this time is different”. The problems in the labor market are not fleeting symptoms but tectonic shifts. Stern will argue that the answer for American families is “an old idea whose time has come—a universal basic income.

It is an old idea, too. Friederich Hayek endorsed it. Milton Friedman advocated a version in the form of a “negative income tax.” Nixon’s modest 1970 version, a $1,600-a-month Family Assistance Plan, died because of political disagreements over work requirements. In the UK, the Labour Party’s Social Justice Commission (which I served) considered it in 1994. It was rejected then for the usual combination of economic and political reasons: the cost would mean high tax rates on ordinary wages, creating strong disincentives to work; and there was no chance the electorate would buy it anyway.

But that was then, and this is now. The rise in income inequality, driven in part by the widening wage gap, means that more of the cost of the UBI could be funded by higher-earners, diluting disincentive effects lower down. In fact, many UBI proponents believe it could actually improve work incentives, by removing the need to remove means-tested payments as wages increase. The RSA’s plan for a British UBI would transform the pattern of marginal tax rates , for instance: 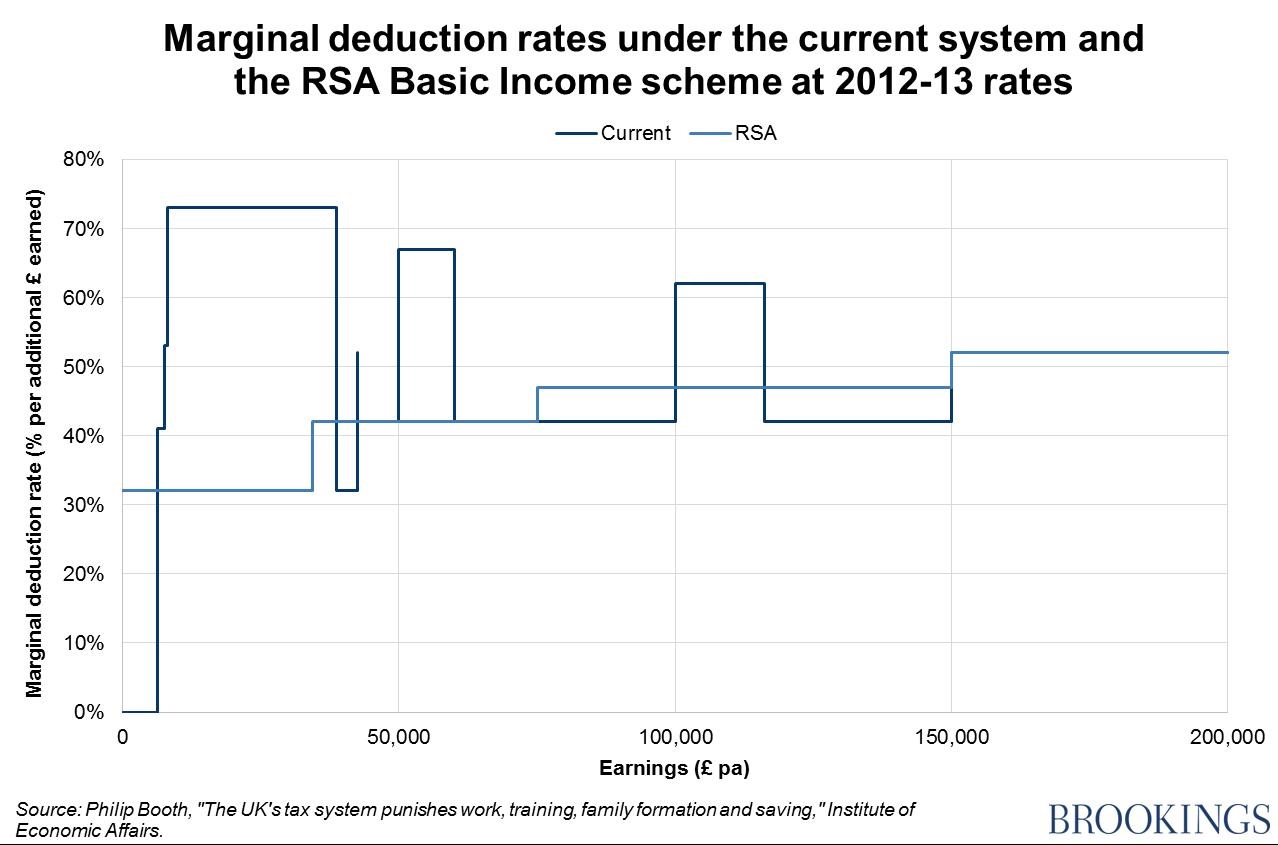 Similar effects will be seen in other nations that rely heavily on means-tested benefits and tax credits to boost low incomes. So, the economics of a basic income likely make more sense today. What about the politics? Especially in America, where the Protestant work ethic came to live? Right now, a basic income would represent a huge leap away from the existing American social contract. But the political mood is shifting in unpredictable ways. What the supporters of both Sanders and Trump share is a sense that things are badly broken down. Radical ideas are all the rage.

A basic income is moving in from the margins. I don’t think we can – or should – rule out the possibility that it will enter the mainstream.