When President Barack Obama’s fiscal 2015 budget was released earlier this month, the tables in the back showed the federal deficit steadily declining from 3.7% of the gross domestic product to 1.6% of GDP in 2024. But the “Analytical Perspectives” volume, usually released with the budget, was delayed until this week.  Now that it’s out, you can put that 1.6% number, well, in perspective.

Both the president’s budget and Congressional Budget Office  reports provide fodder for charts that project federal revenues, spending and deficits out over the next 10 years. Those projections are inevitably wrong: No one knows how fast the economy will grow over the next decade or how fast (or slow) health care spending will rise.  And that matters.  In the Analytic Perspectives volume, the administration quantifies that uncertainty.

The White House budget projects that, assuming all of Mr. Obama’s tax and spending policies were embraced by Congress, the deficit would come in at 2.3% of gross domestic product in 2019. 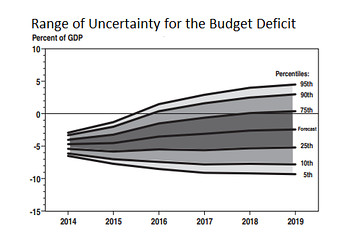 But based on the magnitude of missed forecasts in the recent past, the Analytical Perspectives volume says—see chart at right—that there’s a 90% chance that the actual deficit in 2019 will fall between asurplus of 4.6%  of GDP and a deficit of 9.1% of GDP. (Even for government work, that’s huge.)

Even relatively small differences in the path of the economy can add up to big bucks. Say the economy in calendar year 2014 doesn’t do as well as the administration forecast and instead unfolds as the consensus of (slightly gloomier) economists surveyed by the Blue Chip Economic Indicators newsletter. Then the deficit in fiscal year 2019 will be $604 billion (2.8% of GDP), significantly larger than the official White House $503 billion (2.3% of GDP) forecast. On the other hand, if the economy does much better – as well as the most optimistic 10 Blue Chip forecasters predict – the deficit will be $448 billion (2.0% of GDP) in 2019.