The key contrast is between what Japan has accomplished so far in its decade-long FTA policy and what could be done through these four major trade initiatives. Japan in fact has numerous FTAs in place: 13 as of the end of 2012. The problem is that they have been mostly trade agreements of small ambition that have not generated significant economic gains or made Japan a major player in the world of preferential trade negotiations. I have referred to this in the past as a “busy” strategy of negotiating many “small FTAs.” The import of the Big Four is much larger. A couple of graphs make this point rather eloquently: 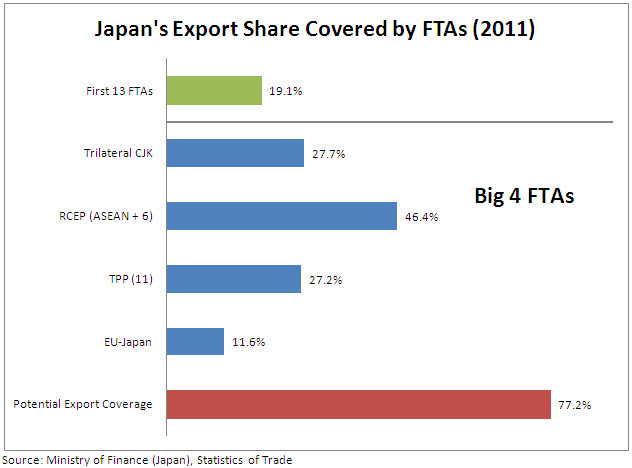 This graph shows that the Big Four FTAs that Japan is now entertaining dwarf what has been accomplished in terms of the share of Japanese exports covered. In fact, if Japan succeeds in negotiating all four trade deals, around 77 percent of its exports would be eligible for preferential market access through its FTA network. Another way to gauge the importance of the Big Four is by estimating their contribution to Japanese economic growth. The graph below shows that the estimated gains from trade as a share of Japan’s GDP are of a different order of magnitude when we compare the Big Four vis-à-vis the previous 13 FTAs. 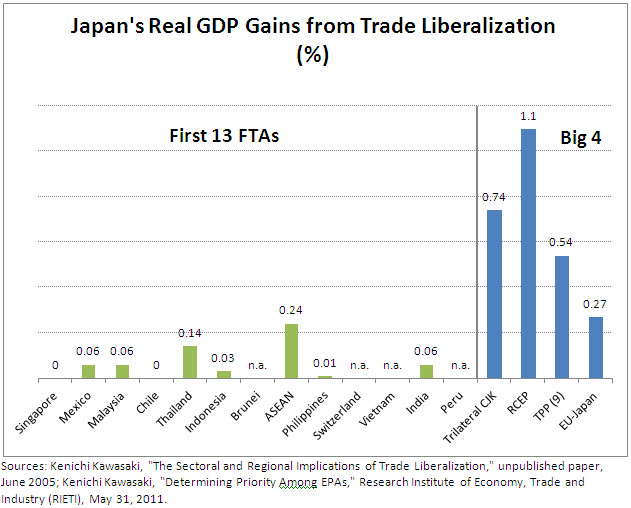 There is a lot to be gained, but will Japan succeed in negotiating in the big leagues? It will not be easy since each one of these initiatives comes with a significant number of challenges. In what follows, I examine the pitfalls that loom on the horizon for Japan’s trade initiatives in the year ahead.

The economic stakes of the Regional Comprehensive Economic Partnership (RCEP) are indeed high if one takes into account that this grouping of 16 nations (in addition to all ASEAN countries, China, Korea, Japan, Australia, New Zealand, and India) represent 40 percent of world trade. Moreover, major players in the region view RCEP favorably as a vehicle to achieve important goals: for ASEAN, it is mostly about maintaining the organization’s centrality in the regional integration process; for China, RCEP is a good counterpoint to the American led TPP; and for Japan, RCEP’s membership configuration dovetails exactly with its long-standing proposal for an ASEAN+6 trade grouping, thereby endorsing a more expansive definition of the East Asian region.

RCEP has big aspirations. As ASEAN countries rolled out the list of principles and objectives for RCEP, they highlighted their aim for a comprehensive agreement (covering goods, services, investment, economic cooperation, intellectual property, competition, and dispute settlement); their intention to go beyond the existing ASEAN+1 FTAs to ameliorate the noodle bowl phenomenon; and their endorsement of the principle of special and differential treatment to take into account the sharp differences in development levels of members. But there are many questions as to whether RCEP can deliver major results in economic integration. ASEAN’s hallmark approach to trade negotiations, one based on flexibility, is fully embedded in RCEP’s negotiation guidelines. This could compromise the overall quality of the agreement if governments have an easy way out to shelter sensitive sectors and negotiations in the rules area only yield weak results. Also, there are real limits in thinking about deep integration given the very pronounced development gaps, especially regarding the smaller ASEAN countries. So the risk is that the agreement could only yield a low common denominator. Finally, RCEP is unlikely to solve the noodle bowl phenomenon since it is clearly stated that the existing web of prior FTAs among negotiating parties will stay intact (this critique also applies to the TPP).

The missed opportunities of not having a trade agreement among the large Northeast Asian economies have long been noted. But defensive economic interests in each country and complicated regional political dynamics made it difficult for the trilateral FTA to prosper. In fact, the three countries studied this possibility for years, which effectively meant that they benched the idea for a very long time. However, the trilateral FTA was finally put on a faster track by the sooner than expected conclusion, in late 2011, of the joint study for an FTA conducted by the three nations and by the formal launching of negotiations last fall. Without a doubt, the fact that the trilateral FTA initiative was not a casualty to the very difficult climate in China-Japan and Korea-Japan relations of the last several months is in itself a very important achievement.

But these negotiations also present multiple challenges. One has to do with the market access negotiations as each country has important defensive economic interests. For instance, Japan and Korea worry about asymmetrical benefits in agricultural liberalization in favor of China, and to deal with these concerns, the joint study report calls for “due consideration of sensitive sectors.” Hence, the possibility of signing a trade agreement of limited reach is very real.

The other serious question is whether the frictions over history and territory will prevent a successful negotiation outcome. It has often been pointed out that even when bilateral relations between China and Japan have reached very low points in 2005 or 2010, the level of economic exchange has not been affected. Although it is too soon to tell whether the more recent frictions will have a longer lasting economic impact, the most recent Japan Bank for International Cooperation (JBIC) survey suggests that there is in fact a different attitude among Japanese companies regarding their business prospects in China. For instance, 65 percent of Japanese firms in the 2012 survey responded that they had been negatively affected, whereas only 22.6 percent reported this had been the case in 2010.

It is important to keep in mind that FTA negotiations are more vulnerable to the overall tone of diplomatic relations for two main reasons: 1) these are inter-governmental negotiations which are difficult to sustain in the middle of a diplomatic row, and 2) every trade negotiator knows that there will be some outstanding disagreements on the negotiation table where political intervention at the highest level will be required to bridge negotiation gaps. That kind of political investment may not be forthcoming in a climate of deteriorating diplomatic relations. This is precisely what happened during the failed attempt to negotiate a Japan-Korea FTA, whose talks have been suspended since November 2004.

Trade agreement with the EU

The Japan-EU FTA promises to be a fascinating negotiation, one that surprisingly has not received as much attention, as everyone is watching developments in East Asia and Asia-Pacific. For starters, there are interesting asymmetries at play in two areas: level of interest and central objective in the negotiations. Japan is certainly much keener than its European counterparts in moving forward with these trade talks. Essentially, the key objective for Japan is to level the playing field for Japanese companies who are deemed at a disadvantage vis-à-vis their Korean rivals in the European market since the enactment of the Korea-EU FTA. So Japan has been mostly focusing on the tariff cutting benefits. For Europe, however, this is about tackling Japanese non-tariff measures (NTMs) that over the years have so confounded Japan’s trade partners. The Europeans have really done their homework as the impact assessment reports they have released provide an inventory and measurement of scores of Japanese NTMs that could be removed via trade negotiations. Technical standards, product approval systems, emission and certification standards, and lack of transparency in government procurement are some of the issues highlighted in the European analysis of Japanese NTMs. In an interesting twist, the European Commission has announced its willingness to suspend the trade negotiations if no concrete progress is made in eliminating NTMs after a year of talks. This may just be an initial negotiation posture, but it certainly will be fascinating to watch these trade talks unfold in the coming months.

Finally, the Japan-EU FTA is also interesting because of the potential demonstration effect it may have on the on-going TPP membership negotiations between the United States and Japan. In contrast to the position of the U.S. auto industry that Japan’s non-tariff barriers cannot be reduced via an FTA, by giving the green light to trade talks with Japan, the Europeans have adopted a different position: that this is a solvable, if difficult, problem.

No other trade agreement has generated as much controversy domestically, and yet it is a key trade initiative for Japan to pursue. The significance of the TPP hinges not only on its promise to generate large economic payoffs and advance the domestic structural reforms that Japan needs to enhance its competitiveness. It is critical as well for Japan to gain leverage in other trade negotiation fronts, lest we forget that it was the prospect of Japan’s TPP membership that encouraged China to speed up the trilateral FTA and ASEAN to roll out RCEP.

But what are the chances that the Abe government will decide to seek entry into the TPP? Needless to say it is a complicated question because both the opponents and supporters of the TPP see promising signs in the incoming Abe administration. Supporters of the TPP are reassured by a number of Cabinet appointments (for instance the new Minister of Agriculture Mr. Hayashi Yoshimasa is not a traditional agricultural policy tribe politician); and by the closer ties established with the business community through the revival of the Council on Economic and Fiscal Policy and the newly founded Headquarters for Japan’s Economic Revitalization. Moreover, many TPP watchers in Japan also report that Prime Minister Abe is personally disposed to TPP and he may support the trade talks as part of his broader effort to strengthen U.S.-Japan relations.

However, opponents of the TPP gain comfort from the fact that the LDP still relies heavily on the fickle agricultural vote and that in this past general election many agricultural policy tribe politicians made a comeback. Anti-TPP sentiment was very high among the roster of LDP candidates elected to the Lower House this past December. A Kyodo News survey shows that 84.3 percent of successful LDP candidates oppose Japan’s TPP participation. Not surprisingly, the ranks of the anti-TPP group within the LDP have swelled to 203 according to an Asahi Shimbun report. More fundamentally, the central political priority for Prime Minister Abe is to win the Upper House election, scheduled for next July, in order to avoid legislative gridlock. No policy (including TPP membership) that threatens that electoral goal will be adopted before that time.

The interesting question is what will happen after the Upper House election. The final outcome will hinge on the following: Can Prime Minister Abe bring the party rank and file with him in supporting Japan’s TPP bid and a complete reorientation of agricultural policy (eliminating the set-aside program and promoting large-scale commercial farming)? Can he avoid the weakening intra-party disputes that plagued the DPJ? And the perennial question: will Japan’s membership bid come too late to join as a founding member? If PM Abe insists that the central guideline is that Japan negotiates on behalf of its national interest, then there is a premium to join as a founding member and not through an accession clause. Hence, the decision cannot be postponed long after July.

Rule the waves, rule the world