Over the years, bilateral and multilateral donors have become increasingly concerned about delivering more effective aid. The determinants of successes and failures in development assistance are varied and complex; yet, experience and analysis point to weak and corrupt institutions as important contributing factors to poor outcomes. Examples of failed projects due to mismanagement and corruption include the Morogoro Shoe Factory in Tanzania during the 1980s, and more recently, heath sector projects in India and the oil pipeline in Chad.

It is therefore important to ask whether donor aid has become more selective over the years. There certainly have been declarations and explicit writings about the need for greater selectivity, and some donors have implemented internal procedures to address the issue. But have these declarations and procedures resulted in increased sensitivity to misgovernance and corruption in recipient countries? In a forthcoming Brookings research report, we explore these and related questions.

Relying on the most up-to-date and comprehensive foreign aid dataset available from the OECD Development Assistance Committee (DAC), we explore the aid disbursement patterns of 41 donors (23 bilaterals and 18 multilaterals), and review whether since 1995 large groups of donors (bilaterals and multilaterals) have taken into consideration the extent of corruption and overall governance in recipient countries when allocating aid. Further, we explore whether there has been a rise in such governance selectivity over the past 15 years.

Our inquiry combines simple cross-tabulations with multivariate econometric analysis, controlling for such factors as population size and income per capita. In addition to reporting results for all donors on average, and for large groups of donors, we also construct donor-specific indexes that measure how vulnerable each dollar of aid is the corruption and misgovernance in recipient countries. We call these indexes the Corruption Vulnerability Aid Index (CVAI) and the Governance Vulnerability Aid Index (GVAI), respectively. These indexes are showcased in our forthcoming report, as well as in the interactive data platform we are launching today (the Development, Aid and Governance Indicators, or DAGI). 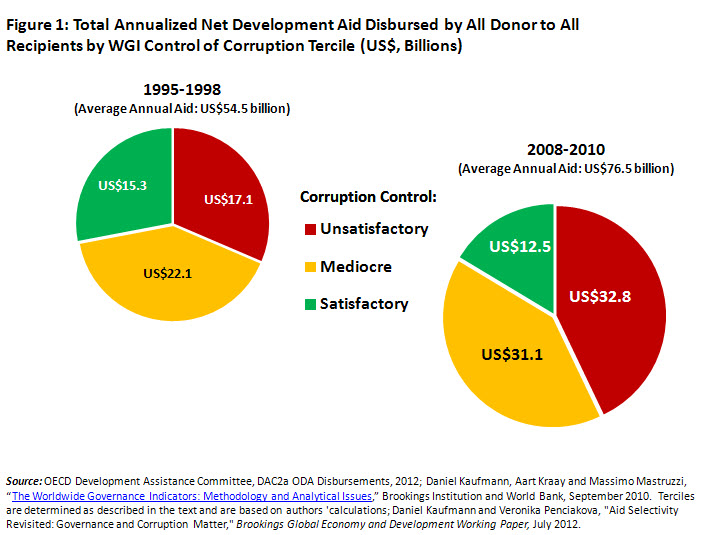 In our study, we first look at how much aid is going to the recipients with satisfactory, mediocre and unsatisfactory control of corruption. It appears that over the years a lion’s share of aid has been disbursed to countries facing serious corruption and governance challenges, such as Afghanistan, Iraq, Nigeria and the Democratic Republic of Congo.

Moreover, aid selectivity has tended to deteriorate, particularly in recent years. In the mid-1990s (1995-1998), countries on the two tail ends of governance performance (satisfactory and unsatisfactory corruption control) received nearly the same amount of aid (around $16 billion, or about 30 percent each of overall aid). But over time, the amount of aid going to each group diverged substantially. As we see in figure 1, in recent years (2008-2010) the most corrupt recipients received about $32.7 billion a year on average (43 percent of overall aid), while countries with satisfactory control of corruption, such as Botswana, Brazil, El Salvador, Ghana and South Africa, among others, received only $12.5 billion (16 percent of overall aid).

These selectivity trends are also confirmed by econometric tests. In fact, we find that the deterioration in selectivity over the past 15 years has been statistically significant. In recent years, significantly more aid has flowed to countries with subpar control of corruption and overall governance. Furthermore, the results suggest that both bilateral and multilateral donors have experienced deteriorating selectivity (the fall having been slightly higher for the bilaterals group on average). 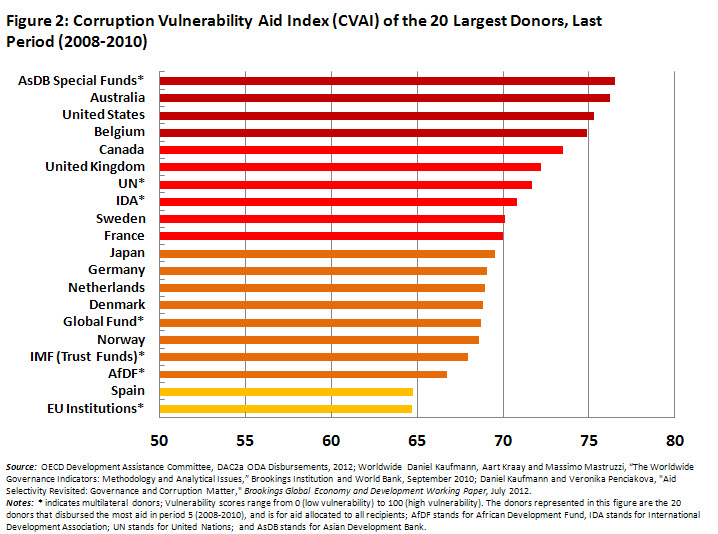 We find that over the past 15 years, the vulnerability of aid among some donors has risen more sharply than for others. As a result, as we see in figure 2, aid disbursed by donors today, including European Union Institutions, Spain and the African Development Fund, while still relatively high, is somewhat less vulnerable than that disbursed by the United States and the Asian Development Bank Special Fund.

Specifically, the aid disbursed by the United States, on average, ends up in a recipient country with corruption in the 75th percentile rank of corruption (100 indicating the most corrupt country in the world). In comparison, aid from EU Institution is channeled toward countries that on average rate in the 65th percentile.

It may, however, be argued that some donors allocate aid to recipients with initially very low quality governance (fragile states, for instance), with the expectation that these countries will improve their governance performance. From this perspective, initially low levels of aid selectivity may not be inconsistent with eventual aid effectiveness. To test this claim, we assessed whether greater volumes of development assistance have a payoff in terms of improved governance performance, thus possibly resulting in reduced future donor vulnerability of aid.

Overall, we found that that aid to countries experiencing governance challenges does not result in improved governance in subsequent years. But, there is evidence that some bilateral aid channeled to lower-income countries and recipients with initially very low corruption control and governance ratings may contribute to improved control of corruption and overall governance in the long-term.

In particular, there is some evidence suggesting that several donors were better at targeting aid to reform-prone recipient countries, including the Netherlands, Norway, the United Kingdom, EU Institutions and the Global Fund to Fight AIDS, Tuberculosis and Malaria. On the other hand, for many donors— including the United States, the International Development Association (at the World Bank), Australia, France and Japan— aid did not appear to spur governance improvements. It should be noted, however, that these results are based on the past 15 years, and thus cannot be generalized for the longer term.

An overarching implication of our study is that the international aid community ought to take a serious look at the extent of aid selectivity with respect to governance and corruption. Aid selectivity matters for the fiduciary accountability of donor agencies since the aid they disburse may be subject to inordinate risks related to misgovernance. And, at least as importantly, it also matters for aid effectiveness. Aid funds channeled to projects where misgovernance and corruption prevail are more likely to fail.

Risk-taking is certainly part and parcel of development, and thus of development assistance. However, these risks need to be managed, and there needs to be greater emphasis placed on working with developing countries on programs and reforms that improve governance and corruption control. Many countries continue to struggle with governance reforms, despite having received significant volumes of aid over the years.

Some aid donors that are subjecting their governance and anti-corruption programs to internal or external evaluation are finding that these strategies and programs are less effective than initially hoped. Our findings regarding declining aid selectivity further heighten the need for donors to review their aid strategies, emphasizing afresh the governance challenges.

Over the years, in response to concerns about the detrimental impact of corruption on development, a number of donor aid agencies created units to investigate possible fraud and corruption in the projects they fund. Several of these investigative units have detected and investigated some corrupt projects (at the “micro” level).

However, by design, these units cannot be expected to address the “macro” challenge of systematic public sector misgovernance and corruption in recipient countries. In fact, these investigative units cannot even focus on the mismanagement of budgetary support aid provided by donor agencies, for instance.

Such “macro” governance challenges require a “macro” response, one which takes seriously the importance of aid selectivity (vis-à-vis countries, NGOs vs. government, central vs. local government, etc.), and addresses the challenge of utilizing development assistance to promote good governance and anti-corruption more effectively.