What child survival goals should be included in a global vision of “getting to zero” on extreme poverty? This question will be increasingly debated as the world maps out a framework to succeed the Millennium Development Goals post-2015. As a first crack at an answer, I suggest a universal target of no more than 30 deaths per 1,000 live births for every community on the planet by 2030.

For context, one of the biggest global breakthroughs of the past decade has been faster progress in reducing child mortality. In statistical jargon, the developing world’s aggregate child mortality rate dropped from 80 per 1,000 live births in 2000 to 57 in 2011, en route to a projected 51 in 2015.

But even though every developing region has seen progress quicken since 2000, mortality rates still vary tremendously, as shown in the table below. 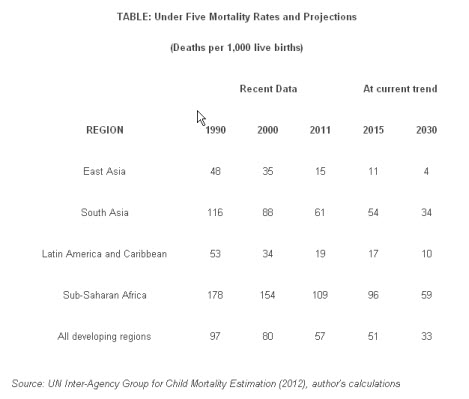 
In light of ongoing advances in programmes and technology, it makes sense to set an absolute minimum standard for all of humanity: no more than 30 per 1,000 by 2030, and perhaps even 25 per 1,000. For comparison, Algeria and Mongolia are currently at 30. Most rich countries are at around 4 or 5.

If Africa continues to improve at recent rates, its mortality will hit 59 per 1,000 in 2030. If it improves almost as quickly as East Asia did in the 2000s, it could get below 30. With slight acceleration, South Asia could also reach 20 or 25 by 2030, making sure averages don’t mask disparities and no community remains above 30. Technology improvements could accelerate things even more.

Nonetheless, it is important to remember that even a child mortality rate of 30 still tragically implies that more than 3% of babies do not reach their fifth birthday. That single sobering fact should serve as enormous motivation when considering how historic it would be to ensure every part of the world reaches at least that standard within the next 18 years.