Once a year the Census Bureau publishes estimates of the number of poor under the official poverty definition.  At the same time, it releases estimates of the trend and distribution of income as well as health insurance coverage.  The numbers for 2011 were issued last week, and as usual they received wide notice in the press.

The news.  The latest numbers contained some good news and bad news.  The good news is that the poverty rate and number of people in poverty probably fell slightly.  The official poverty rate in 2011 was 15.0%, slightly below the peak rates attained in the recessions of the early 1980s and early 1990s and in 2010.  Second, the number of Americans employed full-time and year-round increased 2.4% after three successive years of decline.  Finally, the fraction of Americans covered by a health insurance plan increased by 0.6% following three years of decline.  These improvements in poverty, in the number of earners, and in health coverage show the bad times between 2008 and 2010 gave way to somewhat better times in 2011.

The report also contained large helpings of bad news, however.  The Census Bureau reported that median household income fell for the fourth consecutive year.  It was the ninth time in the past 12 years this headline number has declined.  Adjusted for inflation, median household income shrank 1.5% last year, and it has dropped about 9% since 1999.  The real earnings of full-time, year-round workers also fell last year, dropping 2.5% among both men and women.  For people who worry about American inequality, the latest Census numbers gave additional reasons for concern.  Household income disparities reached a new high in 2011.  The most popular measure of inequality—the Gini coefficient—reached a historical peak, as did the share of total income received by the top one-fifth of households.  The shares of income received by the bottom three-fifths of households—that is, by the middle class and poor—reached all-time lows.

What’s wrong with this story?  Most people who read or heard about the Census numbers were surely disappointed to learn how slowly incomes and wages are recovering from the deep recession.  Several reports mentioned that median household income, adjusted for inflation, has now dipped to a level last seen in 1995.  In the bottom one-fifth of the income distribution, the new Census report showed that real incomes have dropped to a level last seen in 1985.  If we accept the numbers at face value, the underperformance of the economy so far in the 21st century has brought living standards in middle- and low-income families back to levels of 16 or 26 years ago.

The statistical flaws.  The recessions in 2001 and especially 2008-2009 were indeed severe, but the Census income reports provide a misleadingly gloomy picture of the longer term trend in real living standards.  One way to see this is to compare the gains in average income reported by the Census Bureau with estimates published by the Commerce Department in the national income and product reports.  The Census reports suggest that average income per person fell more than 5% between 2000 and 2011.  In contrast, the national income accounts show that real disposable income per person increased more than 9%.

The astonishing gap between the two numbers is partly explained by differences in income definitions.  Disposable personal income includes noncash benefits we receive from our employers and the government (including health insurance and food stamps) and takes account of household payments for income and payroll taxes.  The Census Bureau’s income definition ignores these items.  For most households, the health benefits we receive have increased faster than our cash incomes.  In addition, our income and payroll taxes have increased much more slowly than our cash incomes.  For many households, direct tax payments declined substantially.

The Commerce Department’s national income accounts do not tell us how income is distributed across households.  In a report published in July, however, the Congressional Budget Office (CBO) used a comprehensive income definition to analyze trends in the distribution of after-tax income up through 2009.  Unlike the Census Bureau’s income definition, the CBO’s takes account of noncash benefits, like health insurance and food stamps.  And unlike the Census Bureau estimates, the CBO’s reflect incomes reported to the IRS as well as in household surveys.  Finally, the CBO analyzes net, after-tax incomes, while the Census Bureau focuses on before-tax incomes.  In sum, CBO attempts to estimate income trends under a truly comprehensive income definition.

How do the two sets of estimates differ?  The Census household survey shows that the average income of Americans in the bottom one-fifth of the income distribution shrank in 8 out of 10 years between 1999 and 2009.  In those 10 years income fell a total of 9%.  In contrast, under the CBO’s comprehensive after-tax income definition, average incomes in the bottom one-fifth fell in only 3 out of 10 years—and in none of the years of the Great Recession.  The average after-tax income in the bottom fifth actually increased 11% in the decade between 1999 and 2009.  According to the Census Bureau’s estimates, Americans in the middle one-fifth of the income distribution saw their incomes fall in 6 of the 10 years between 1999 and 2009.  Their average incomes fell a total of 6% over the decade.  Under the CBO’s comprehensive definition, the after-tax incomes of the middle fifth fell in just 4 of 10 years, and they increased a total of 8% in the decade after 1999. 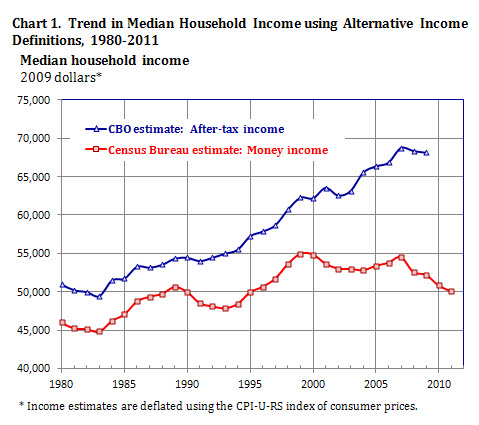 Two features of the chart are striking.  The CBO estimates show higher median incomes in every year.[1] In addition, the Census measure shows a bigger falloff in income during recessions—in the early 1990s, in the first years of the last decade, and after 2007. The CBO income estimates are higher because they include capital gains income and noncash income sources, like food stamps, health insurance, and employer pension contributions.  Compared with the Census Bureau estimates, the CBO estimates show smaller income losses in recessions because they reflect the fact that household tax payments fall by a bigger percentage in a bad economy than households’ pretax incomes.  The drop in household tax burdens accelerated after 2000 because of sizeable tax cuts.  In the 1980s, the CBO’s estimate of median income is only about 10% higher than estimates under the Census Bureau definition.  In the years after 2000, the CBO estimates are 24% higher than those produced by the Census Bureau.  The result is the median income gains are bigger (or income losses are smaller) under the CBO’s income definition.  Chart 2 shows the differences in three periods—1989 to 2009, 1999 to 2009, and 2007-2009.  In all three periods income gains are considerably faster (or income losses smaller) under the CBO comprehensive definition.  For example, the two bars on the right show the drop in median incomes in the Great Recession.  The median household income estimates of the Census Bureau show a 4.2% drop, while the more comprehensive CBO estimates suggest median income declined than 1%. 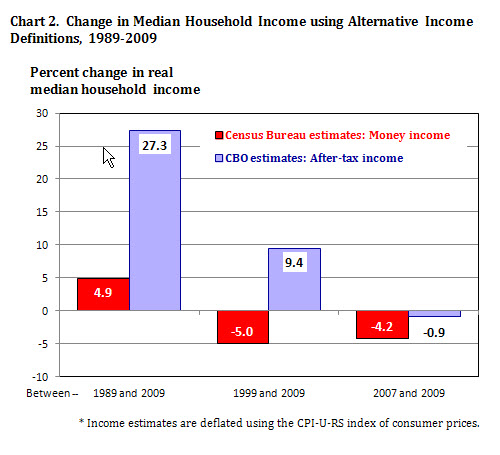 The basic difference between the Census income estimates, on the one hand, and the Commerce Department and CBO statistics, on the other, is that the Census is measuring a narrower and increasingly out-of-date concept of income.  Much of the income Americans receive is not received as cash or is poorly reported in a household survey.  For example, more than a fifth of our personal consumption now consists of health care, and we pay for only about a quarter of that care out of our cash incomes.  The rest is reimbursed through employer-provided or government-financed health insurance.

More worrying is the failure of the Census Bureau’s money income concept to reflect many of the policy measures used by the government to combat the effects of severe recessions.  Congress and two Administrations made sizeable tax cuts in 2001, 2003, 2008, 2009, and 2010.  None of the tax cuts are reflected in money income.  Congress and the Obama Administration liberalized food stamps in 2009.  Those benefit improvements are also excluded from the Census money income measure.  The federal government provided generous aid to states so they could maintain or improve health insurance programs for the unemployed and indigent.  Even though the extra aid boosted enrollment in government insurance programs, none of the increase is reflected in the Census Bureau’s definition of income.

Using a comprehensive income definition changes our sense of the long-term trend in income.  Properly measured, incomes have increased rather than shrunk since the end of the 1990s.  Through 2009, the most recent CBO report suggests after-tax incomes at the bottom actually improved faster than they did in the top fifth of the income distribution.  Both the Census Bureau and CBO income estimates agree in showing inequality has increased over much of the past four decades.  But unlike the new Census income report, estimates from both the Department of Commerce and CBO suggest that American incomes have improved over the past decade.