President Obama’s tour of Latin America, including visits to Brazil, Chile and El Salvador, starts this weekend. This visit is unlikely to constitute a historical watershed. It comes at a time when Obama faces three major crises—Libya’s ongoing civil conflict, Japan’s unfolding triple disaster, and the United States’ congressional impasse over the federal budget.

Thus, throughout his visit, Obama may confront issues far removed from Latin America. Fittingly, or ironically, Latin America has not been a priority for U.S. foreign policy in recent years. From a national security standpoint, there are a few exceptions, such as two important countries Obama will not visit, namely Colombia and Mexico, where narco-violence has attracted U.S. focus. Yet, that almost sums up the extent of U.S. foreign policy priorities vis-à-vis the continent so far.


But, this presidential visit ought not go to waste. President Obama chose Chile, not the Brazil powerhouse, or Argentina (a G-20 member that Obama will not visit), to publicly address the Latin American region. On the world stage, Chile, which is not in the G-20, is considered a modest country.


In this regard, one can draw similarities to Obama choosing Ghana over Kenya or Nigeria for his address to Sub-Saharan Africa when he visited that region.


Obama will undoubtedly go through the motions and raise issues that the U.S. and Chile have been working on for some time, including educational training, intellectual property rights, narcotics control, innovation, visa waivers, and the Trans-Pacific Partnership (TPP) trade negotiations with Asian partners. Obama would be well-advised not to insist on signing a specific nuclear power agreement with Chile in this most-sensitive of times, considering the current events in Japan. More generally, in light of the current reality in Chile, and the major crises unfolding around the world, Obama may want to deviate some from his official script.


For starters, departing from practices by some in the past, Obama should treat Latin Americans and the Chilean leadership as equals. After all, in spite of the superpower gap, Chile and the U.S. exhibit some striking similarities in their achievements and challenges. For example, Chile is no longer a developing country, but rather a successful emerging economy and a full-fledged member of the OECD. While Chile’s accession to the club of industrialized nations is recent, this commonality brings into stark relief another similarity between both countries: both the U.S. and Chile share a similar quality of governance in most dimensions, as we see in Figure 1.


For instance, among over 210 economies around the world, on Government Effectiveness, Chile ranks 31st and the U.S. 24th; on Regulatory Quality, Chile rates 14th and the U.S. 23rd; and on Control of Corruption, Chile rates 23rd in the world and the U.S. 32nd. On Voice and Democratic Accountability, the United States rates somewhat above Chile, while the converse is true for Political Stability/Absence of Major Violence/Terror. Both countries have serious challenges regarding security and safety. In Chile, this is due to high levels of common crime stemming partly from inequality. In the United States, the high homicide rate is partly due to ubiquitous availability and use of guns, which puts at risk high-level politicians. 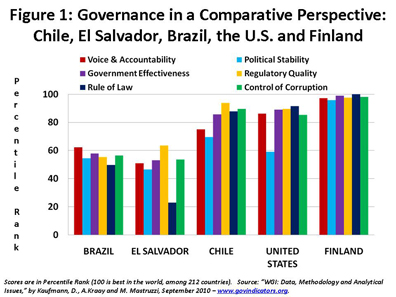 The fact that the United States’ quality of governance is not superior to that of Chile ought to be seen as evidence of Chile’s progress over the past couple of decades, and as a sobering reminder to the U.S. that it is not a model country on governance. Model countries, such as Scandinavian economies and New Zealand, should serve as symbols for Chile and the U.S. of what is attainable.


Besides governance, Chile and the United States have commonalities and differences. Both countries have relatively deficient educational systems in dire need of bold reform (though even more so in Chile). Over the past decade, Chile has done much better than the U.S. in macro-economic management, sustaining fiscal stability and maintaining the integrity of its financial sector. Conversely, Chile has much to learn from the U.S. regarding technological innovation.


Another common trait is self confidence. Polls suggest that citizens in Chile, Israel and the U.S. tend to have very high self-esteem, while people in Japan, South Korea and Switzerland tend to be very humble. Not surprisingly, the current heads of state of Chile and the U.S. also exhibit very high levels of self-confidence. On the one hand, such high self-esteem can create a blind spot to personal and countrywide challenges and shortcomings—both leaders have had low poll ratings recently. On the other hand, such self-confidence, if coupled with boldness and risk-taking, can be a positive force for reform, as witnessed with Obama’s push for health care and financial reform last year and Piñera’s handling of the miners’ rescue.


Undoubtedly, in President Obama’s major public address to Latin America that will take place in Santiago, he will praise Chile’s performance. He would be wise to steer clear of condescending comments on the country and region, and instead focus on the shared achievements and challenges facing the U.S. and Chile. To avoid meddling in internal politics, Obama should not apportion credit for Chile’s achievements to either the current (right-of-center) or past (left-of-center) governments. All Chileans, and every (post-Pinochet) leader, deserves credit for the country’s institutional and growth performance.


The fact is, in contrast to the destructive squabbling between Democrats and Republicans that dominate Washington politics, Chilean politicians, from all parties, even if they disagree on emphasis and details, have shared for years a common agenda on maintaining sound financial and macro-economic policies, sustaining robust growth and poverty alleviation and expanding social safety nets, open markets and good governance.


In his message to the region, Obama should focus on the region’s major constraint to future progress and social peace: glaring inequality. He should not waste this opportunity by speaking at length on the obvious (to Latin Americans) virtues of democracy and protection of human rights. With the exception of Cuba, and notwithstanding the challenges in a few countries like Venezuela and Nicaragua, these are not contentious issues for most every citizen or leader in the region.


The traditional political approach to inequality focuses on inequality of income, access to productive jobs and educational opportunities. It would behoove Obama to suggest that an underlying determinant of economic inequality is political inequality. In Latin America, there is an enormous divide between the powerful elites and the rest of the citizenry. The former wield disproportionate political influence in shaping the laws, regulations and policies—what we have dubbed as “state capture”—and such excessive presence of “elites and business in government” has been a driver of economic inequality.


It would be a bold step for Obama to take a fresh approach to inequality and frankly talk about political inequality, vested interests and undue influence of corporate elites. These are particularly sensitive issues not only in Latin America (even in Chile, the otherwise “stellar performer”), but also in the U.S. Not only has economic inequality grown recently in the U.S., but the challenges of undue political influence and money-in-politics have become increasingly damaging, as Obama well knows. By taking this opportunity and talking frankly about economic and political inequality, Obama could move away from what otherwise may be just another public address, into a transformative message on shared achievements and shortcomings and the need for serious political reforms in Latin America and the U.S.


When U.S. presidents travel to countries in an emerging region, with their vast entourage of officials and executives, it is typical to see a focus on partnership agreements (and on vague grandiose pronouncements). Obama’s trip to Latin America may be no exception, as illustrated by so many writings on specific “transactional” agreements that may be signed on the visit.


But it is important to keep in mind that such bilateral transactional approach should not come at the expense of a commitment to a few economic and policy fundamentals in the U.S.: establishing truly open markets (to goods, services, ideas and people) into the U.S., prudent fiscal policies to attain macro-economic stability, and making the financial sector more resilient to strive toward sustained growth in the U.S. A pledge by Obama on these fronts, which would entail tackling domestic undue influence by protectionist, as well as Wall Street, vested interests, is likely to have more of a concrete impact on Latin America than a signature of any bilateral transaction or particular partnership with a country in the region.