Big cities could be making a growth comeback after a rocky decade. Their growth rates are rising and, for the second year in a row, they are growing faster than their surrounding suburbs.

The Census Bureau’s new release of population estimates for cities through July 2012 offer some surprises in light of recent trends. After plummeting to postwar lows during the Great Recession and its immediate aftermath, national migration rates have begun to increase again as the economy recovers. As a result, the traditional Snowbelt-to-Sunbelt shift has resumed as well. Many assumed that large cities, especially in the Snowbelt, might also release their hold on seemingly “stuck in place” residents who, due to the housing market stall, might have been prevented from moving to the suburbs or other regions of the country.

Instead, these new numbers raise the prospect that large cities may be in store for something of a demographic comeback. During the 2000-2010 decade, including the pre-recession housing boom years, many big cities grew slowly or even lost population as residents decamped for growing smaller cities and suburbs. From 2010 to 2012, however, cities with over one-half million population grew considerably more rapidly than they did, on average, over the previous ten years.

In fact, new data show that for 16 of the 20 largest U.S. cities, growth rates accelerated in 2011-12 compared to 2010-11 (Table 1, PDF). These included the Snowbelt cities of Chicago, Indianapolis and Columbus, as well as the coastal California cities of Los Angeles, San Francisco, and San Diego—places that grew much more slowly during the earlier suburban housing boom years. Between the 2010 Census and July 2012, New York led all cities by gaining 161,000 people, almost eclipsing its gain of 166,000 over the previous ten years. Since 2010, Los Angeles gained 65,000 people compared with 97,000 over the previous decade. And Chicago’s fortunes shifted from a loss of 200,000 from 2000 to 2010 to a gain of 19,000 from 2010 to 2012. The fastest-growing big cities continue to be located in the Sunbelt, led by Austin, Charlotte, Fort Worth, Dallas, San Antonio and Phoenix.

The faster growth of large cities might relate to the continued slowdown in suburban growth, held back by a still-lagging housing market. In 2010-11, big cities in the nation’s largest metropolitan areas grew faster than their suburbs for the first time since the 1920s, a trend that prevailed again in 2011-12 (Figure 2). Among the 51 metropolitan areas with more than one million residents, 24 saw their cities grow faster than their suburbs from 2011 to 2012 (Table 2, PDF). That was true of just 8 metro areas from 2000 to 2010. Metropolitan areas exhibiting the largest city growth advantages included Atlanta, Charlotte, Denver, and Washington, D.C. 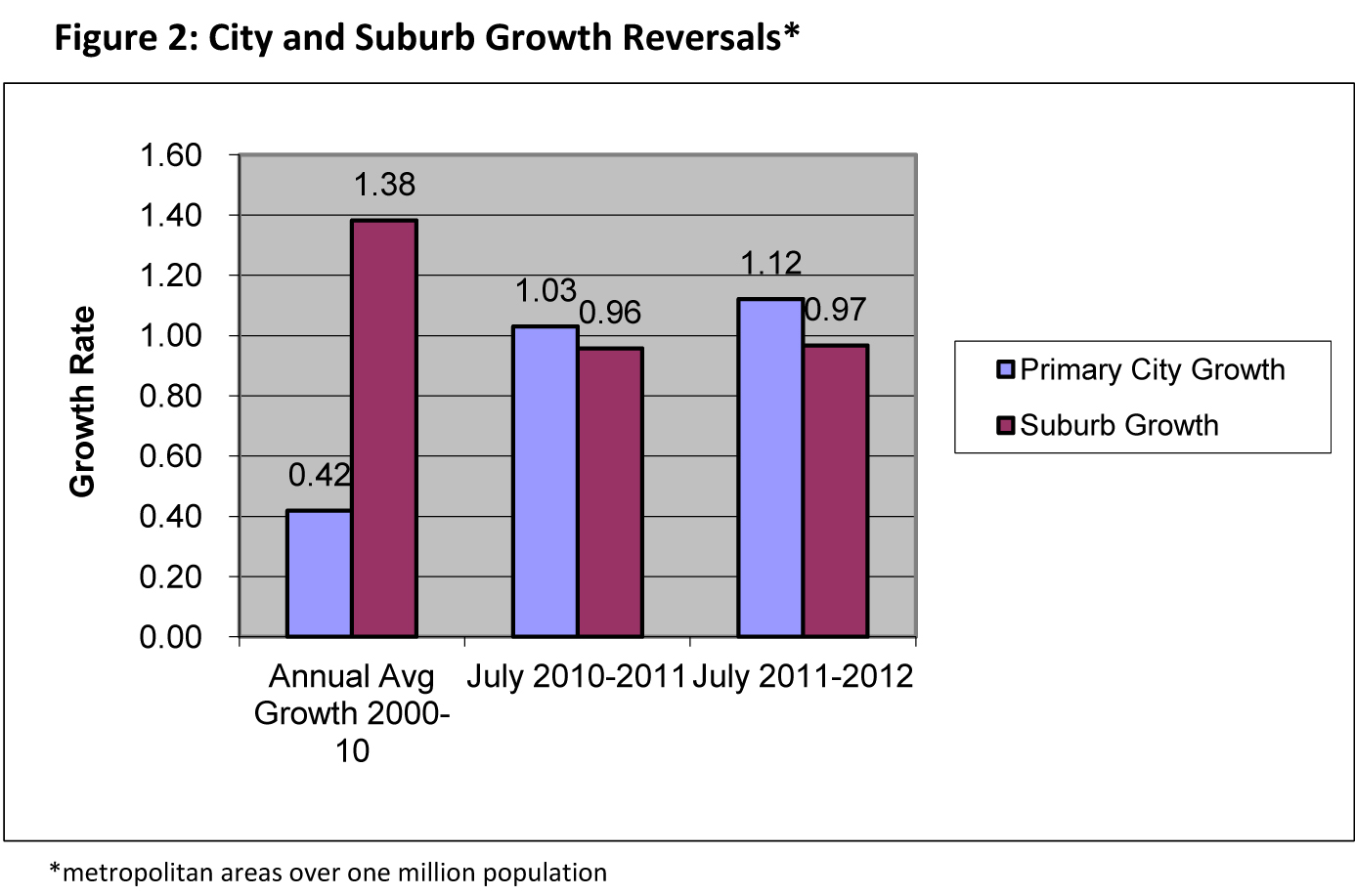 Of course, the suburbs of Sunbelt metropolitan areas like Austin, Houston, and Orlando continue to grow very fast. Yet their big cities are also growing rapidly, faster relative to their suburbs than in the 2000s.

Could this be the decade of urban revival that the 1990s heralded? A lot depends on the location preferences of today’s young people, who thus far seem to be less suburban-bound than earlier generations. And the migration decisions of the booming retiree population and new waves of immigrants will matter greatly, too. It’s too soon to tell if a rebounding housing market will lure these groups away from big cities.  But since this hasn’t happened yet, city boosters can be optimistic about their future.