The effort to dismantle al Qaeda continues. After a number of blows including the death of its founder and leader Osama bin Laden, the organization is on the defensive. But a move to reconstitute al Qaeda by increasing its affiliate organizations is underway. By working with these local factions, al Qaeda is increasing its power and expanding its reach. These mergers aren’t wholly effective, however, and tensions between al Qaeda’s core and its affiliates could be exploited, notes Senior Fellow 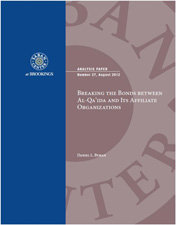 Daniel Byman’s paper Breaking the Bonds between al-Qa’ida and Its Affiliate Organizations examines the dynamics of al-Qa’ida-affiliate relationships and the interests each party brings to these partnerships.

Highlights from the paper include:

• Factors that determine why local groups decide to join or not to join with al-Qa’ida.

Byman argues that by exploiting the areas where al-Qa’ida and its affiliates do not agree, the United States and its allies can limit al-Qa’ida’s influence and expansion around the world.

Elections in Palestine: Prelude or ploy?