According to an August 2015 survey, 72 percent of Americans find drug costs unreasonable, with 83 percent believing that the federal government should be able to negotiate prices for Medicare. Recently, Acting Administrator of the Centers for Medicare and Medicaid Services (CMS) Andy Slavitt commented that spending on medicines increased 13 percent in 2014 while health care spending growth overall was only 5 percent, the highest rate of drug spending growth since 2001.

Some of the most expensive drugs are covered under Medicare’s medical benefit, Part B, because they are administered by a physician. They are often administered in hospital outpatient departments and physician offices, and most commonly used to treat conditions like cancer, rheumatoid arthritis, and macular degeneration. Between 2005 and 2014, spending on Part B drugs has increased annually by 7.7 percent, with the top 20 drugs by total amount of Medicare payments accounting for 57 percent of total Part B drug costs. While overall Part B drug spending is a small portion of Medicare drug spending, the high growth rate is a concern, especially as new expensive breakthrough cancer drugs enter the market and have a negative effect on consumers’ pockets.

Unlike Part D, the prescription drug benefit, there are fewer incentives built in to Part B for providers to consider lower cost treatments for patients even if the lower cost drug may be clinically equivalent to the more expensive drug, because prior to budget sequestration, providers received 6 percent on top of the Average Sales Price (ASP) of the drug. Larger providers and hospitals often receive discounts on these drugs as well, increasing the amount they receive directly on top of the out-of-pocket cost of the drug.

This leads to more out-of-pocket costs for the consumer, as patients usually pay 20 percent of Part B services. The Government Accountability Office (GAO) estimated that in 2013, among new drugs covered under Part B, nearly two-thirds had per beneficiary costs of over $9,000 per year, leading to out-of-pocket costs for consumers of amounts between $1,900 and $107,000 over the year. On top of these high costs, this can lead to problems with medication adherence, even for serious conditions such as cancer.

To help change these incentives and control costs, CMS has proposed a new demonstration program, which offers a few different reimbursement methods for Part B drugs. The program includes a geographically stratified design methodology to test and evaluate the different methods. One of the methods garnering a lot of attention is a proposal to lower the administration add-on payment to providers, from current 6 percent of ASP, to 2.5 percent plus a flat fee of $16.80 per administration day.

Policymakers, physician organizations, and patient advocacy organizations have voiced major concerns raising the alarm that this initiative will negatively affect patient access to vital drugs and therefore produce poorer patient outcomes. The sequester will also have a significant impact on the percentage add on, reducing it to closer to an estimated .86 percent plus the flat fee. But we believe the goals of the program and its potential to reduce costs represent an important step in the right direction. We hope the details can be further shaped by the important communities of providers and patients who will deliver and receive medical care.

Last year, we wrote a Health Affairs Blog that highlighted some of the uses and limitations of publicly available Part B physician payment data. One major use was to show the geographic variation in practice patterns and drug administration, and we particularly looked at the difference across states in Lucentis v. Avastin usage. As seen in Exhibit 1, variation in administration is wide among states, even though both are drugs used to treat the same condition, age-related macular degeneration, and were proven to have clinically similar outcomes, but the cost of Lucentis was $2,000 per dose, while Avastin was only $50 per dose. 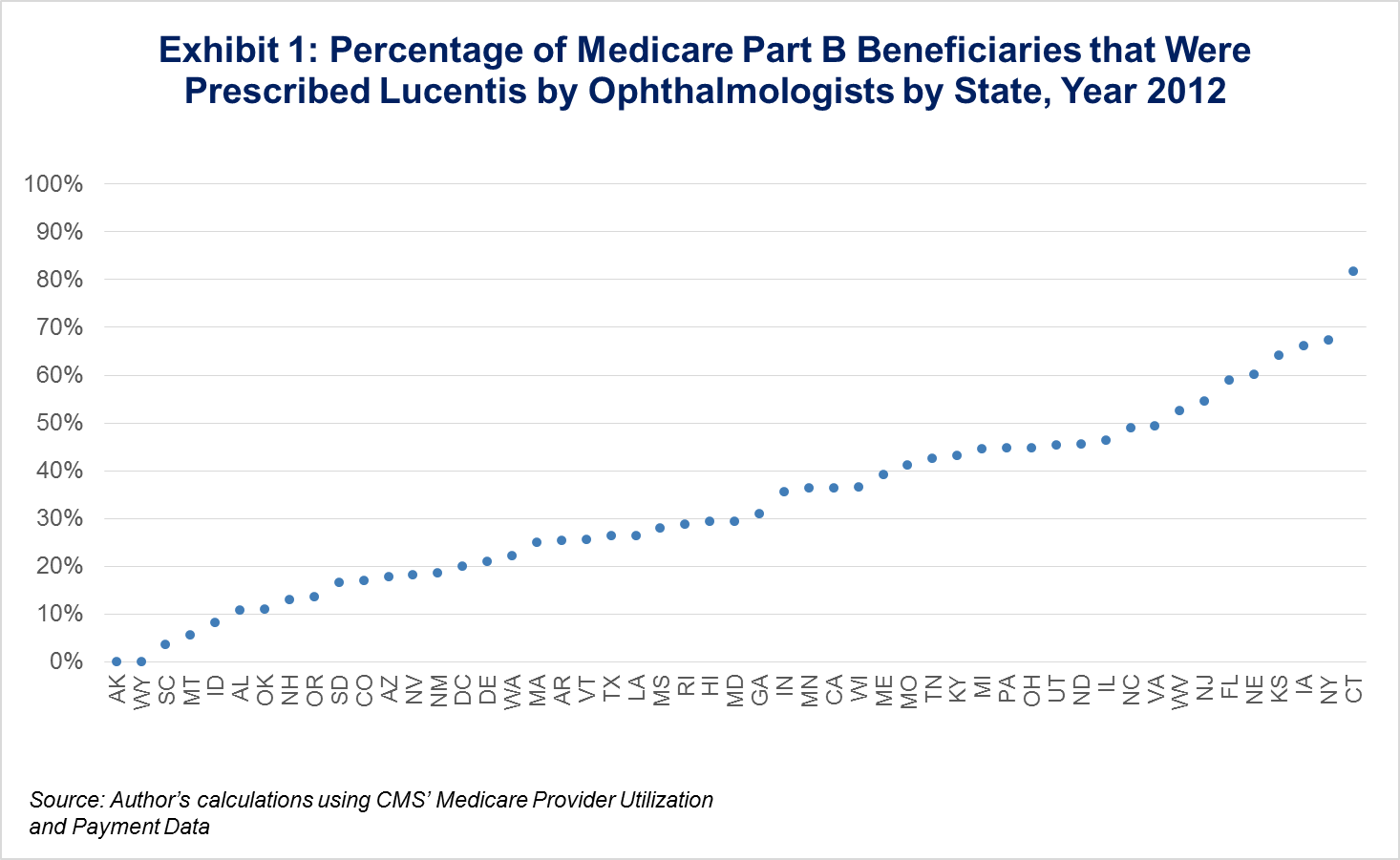 Using the same price estimates from our previous research, which are from 2012, we found that physician reimbursement under the proposed demonstration would potentially change from $120 to $66.80 for Lucentis, and increase from $3 to $18.05 for Avastin. Under the first payment model, providers were receiving 40 times as much to administer Lucentis instead of Avastin, while under the new proposed payment model, they would only receive 3.7 times as much.

While still a formidable gap, this new policy would have decreased financial reimbursement for providers to administer Lucentis, a costly, clinically similar drug to the much cheaper Avastin. As seen in Exhibit 1, a majority of physicians prescribe Avastin, thus this policy will allow for increased reimbursement in those cases, but in states where Lucentis is prescribed in higher proportions, prescribing patterns might start to change as a result of the proposed demonstration.

The proposed demonstration program includes much more than the ASP modifications in its second phase, including:

This is all at the same time that a new model in oncology care (OCM) is being launched, which could help to draw attention to total cost of care. It is important that CMS try to address rising drug costs, but also be sure to consider all relevant considerations during the comment period to fine-tune the proposal to avoid negative effects on beneficiaries’ care.

We believe CMS should consider offering a waiver for organizations already participating in Center for Medicare & Medicaid Innovation (CMMI) models like the OCM, because financial benchmarks are based on past performance and any savings recognized in the future could be artificial, attributable to this demonstration rather than to better care coordination and some of the other practice requirements that are part of the proposed OCM. Furthermore, because this demonstration sets a new research precedent and because it is mandatory in the selected study areas rather than voluntary, CMS must try to anticipate and avoid unintended consequences related to geographic stratification.

For example, it is possible to imagine organizations with multiple locations directing patients to optimal sites for their business. Also, without a control group, some findings may be unreliable. The proposed rule currently lacks much detail, and there does not seem to be enough time for organizations to evaluate the impact of the proposed rule on their operations. Having said that, it will be important for stakeholders of all types to submit comments to the proposed rule in an effort to improve the final rule prior to implementation.

The critical question for the policymakers and stakeholders is whether this model can align with the multitude of other payment model reforms — unintended consequences could mitigate all the positive outcomes that a CMMI model offers to beneficiaries. Helping beneficiaries is and should be CMS’ ultimate obligation.