Despite being declared eliminated from the United States in 2000, a recent Disneyland-centered measles outbreak has since spread to 14 states and may be responsible for an estimated 102 reported cases. This alarming resurgence has once again brought the safety and effectiveness of vaccines to the forefront of national debate. The outbreak, and the subsequent national response, has incited inflammatory remarks and frustration among politicians, journalists, parents, medical professionals and philanthropists nationwide.

One thing is certain—the distortion of the facts about vaccines could have dangerous consequences for public safety and public health. In this post, we’ll cover some basic facts about vaccines, their significance, their contentious history and their recent misrepresentation by the anti-vaccine movement.

Vaccines are a type of drug that aid the body’s immune system. They essentially act as a neutered and ineffective form of a disease, tricking the body into producing the types of cells required to defeat the infection even though the vaccine cells pose no harm themselves. By doing so, vaccines teach the immune system how to defeat imposter cells and attack true infections when they occur.

Vaccines are critical for two reasons. 1) They help each vaccinated individual resist infections, sparing lives and reducing sicknesses in those who receive them. 2) They can stop the spread of disease within the larger community as a whole.

2.
What is herd immunity?

Measles is a highly transmissible disease; so transmissible in fact, that 90 to 95 percent of people must be vaccinated in order to protect the entire population, or achieve what is called “herd immunity.” This effect is what helps eliminate disease entirely.

When enough people have a vaccine and cannot catch or spread a disease, the pathogen cannot form a functional chain of infection. This means that even if someone cannot receive a vaccine, say a newborn or a child undergoing chemotherapy, they are protected because everyone they come into contact with is immunized. This enables us to defeat strains of disease entirely by denying the strain the chance to spread to new victims. (The Washington Post provides a more exhaustive explanation of this concept here). 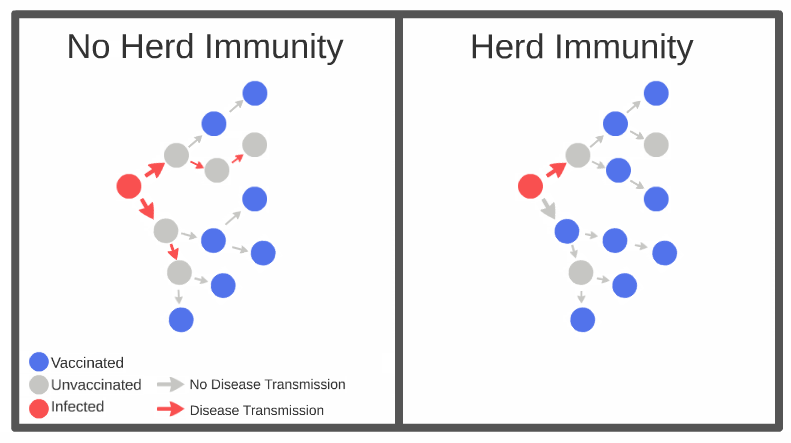 3.
Do we know vaccines work?

Yes, very much so. Vaccines have successfully eliminated some of the most prevalent and harmful diseases in our history, from polio to smallpox. They are 90-99% effective on average, and save 2.5 million children in the U.S. from potential diseases every year. Moreover, they have been proven safe in an enormous number of studies and are encouraged by the American Academy of Pediatrics, Centers for Disease Control and Prevention (CDC), National Institutes of Health, National Academy of Sciences, and the World Health Organization.

4.
If vaccines are known to be safe and effective, why all the debate?

Much of the anti-vaccine debate surrounds the link between the measles, mumps and rubella vaccine (MMR) and autism. A 1998 study in the Lancet by Dr. Andrew Wakefield concluded that the MMR could be linked to autism, inciting panic among parents and the medical community. The study has since been declared an “elaborate fraud,” the paper was retracted, and Wakefield lost his medical license. Indeed, an exhaustive study of more than 500,000 vaccinated children published in the New England Journal of Medicine found no such evidence of a connection, and additional studies continue to show similar results.

However, even the slight possibility of a link failed to calm parents, and the issue drew even more attention in the late 2000s when celebrity parents of autistic children, such as Jenny McCarthy and Holly Robinson Peete, became particularly outspoken about the alleged link between autism and vaccines (McCarthy has since indicated she is “pro-vaccine”).

5.
Why is the debate getting so politicized?

Americans as a whole embrace the scientific consensus of the benefits and safety of vaccines. However, since the California outbreak, many public figures, several of them potential 2016 presidential candidates, have made controversial statements doubting the health benefits of vaccines.

New Jersey Governor Chris Christie spoke of the government needing to “balance” the desires of parents with the public health benefits of vaccines – despite searching for no such balance when, against the advice of public health officials, he forcibly quarantined a symptom-free nurse who had treated Ebola patients this summer. Sen. Rand Paul told CNBC that he had “heard of many tragic cases of walking, talking normal children who wound up with profound mental disorders after vaccines,” before admitting that there is no evidence linking mental disorders to vaccines and getting a hepatitis booster vaccine himself. 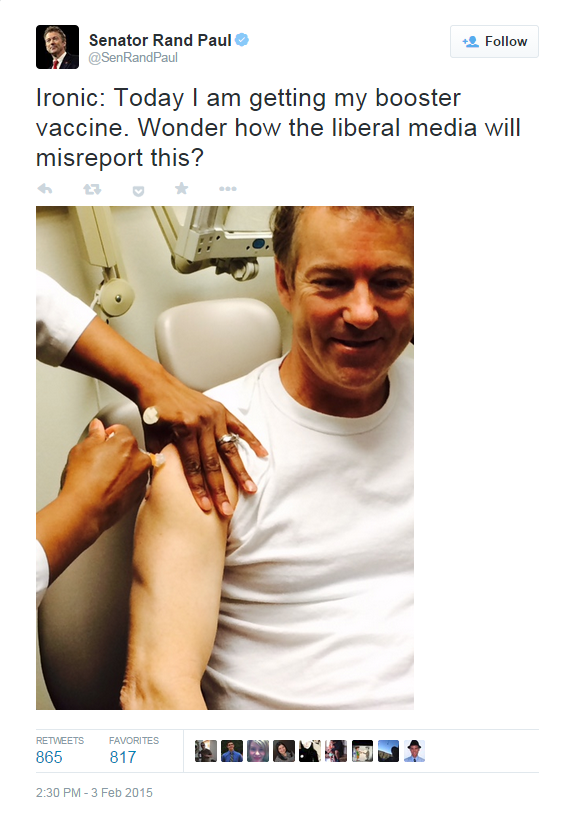 Hillary Clinton, meanwhile, tweeted that “The science is clear: The earth is round, the sky is blue, and #vaccineswork.”

President Obama remarked on the “Today” show, “The science is, you know, pretty indisputable. We’ve looked at this again and again. There is every reason to get vaccinated, but there aren’t reasons to not to.”

This politicization of the debate is a dangerous development of a clear-cut public health issue. In recent days we have seen calls for the President to mandate inoculations for all children – a move that some worry would risk pushing those who dislike the President to needlessly embrace the anti-vaccine movement.

After watching the panicked and politically charged national response to the Ebola crisis this summer, in which governors such as Christie and Andrew Cuomo ignored the recommendations of public health officials to impose unnecessary quarantines and impose travel restrictions, it was ironic to remember that the GOP has a long track record of undermining the funding for our public health infrastructure before criticizing the government for a “lack of preparation” when a pandemic gets in the news. Our public health system has suffered from the polarization of health policy; the anti-vaccine movement might only get stronger with increased political attention heading into 2016. With an issue as important as vaccination, we cannot afford to introduce political warfare.


The vast majority of Americans join scientists and doctors in their appreciation for the benefits and necessity of vaccines. Politicizing what is factually a very one-sided debate may well lead to more misinformation and greater rates of vaccine avoidance. When inoculation rates fall so much that diseases previously eradicated return, it doesn’t just effect those who resist vaccines – it affects everyone.