The road towards growth and reforms

The first paper focused on key reform themes that can support sustainable and inclusive growth in South Asia—growth that is job-rich and environment-friendly. The second paper undertook a more general analysis using cross-country data from Emerging Markets and Developing Economies (EMDEs). It focused on broad themes of structural reforms that can accelerate convergence and boost growth.

The presentation was followed by Dr. Kapoor’s insights, focused on the macroeconomics of unbalanced growth. He stated that, theoretically, if a government decides to subsidise a constant productivity sector from returns of an exponentially productive sector—growth will have to be sacrificed. He quoted that these goals—growth and cross-subsidisation—were essentially incompatible. In his view, a good example of this situation is the government’s promise of doubling agricultural income while aiming for 8-10% growth. On the topic of bolder and safer reforms, Dr. Kapoor observed that while reforms have to be a part of the wider political agenda, they cannot ignore the people they impact—this also makes reforms reasonable from a political lens

The second discussant, Mr. Bhattacharya focused his comments on the timing, extent, and impact of reforms with the degree of crisis in India’s context. He observed that reforms have worked best for India amid deep crisis. Today India may not be in a crisis, but the current growth slowdown is alarming. He noted that a 5% growth in one quarter triggered the government to cut corporation tax for the first time in 17 years. Bhattacharya argued, “Research should focus on gauging the extent of the importance of political economy in charting a model that produces both more reforms and more growth”. He concluded by stressing upon the importance of education and skilling in the context of India as a services giant.

Dr. Anne-Marie noted that India’s growth can be boosted by product and labour market-lead reforms. She observed that what holds back an increase in agricultural productivity in India is closely related to the rest of the economy—addressing the structural problems will also facilitate the issue of agriculture. On the question of political will around reforms, she observed that it is essentially a question of consensus. International experience shows that it is easier to form consensus when the economy is in a bad shape. However, the growth impact of reforms is the greatest when they are introduced in a healthy economy. In India’s context, she said that while 5% growth is not a crisis, it is an opportune time to use it as a wake-up call to develop consensus and introduce reforms.  On India being a services giant, Gulde noted that while this strategic advantage should be maintained, 130 million youth will enter the labour force in India by 2040, hence, it is essential to develop and support the manufacturing sector. She underlined the need for a multi-pronged policy that takes cognizance of India’s diverse needs. Since India has a well-developed internal market with a growing middle class, the demand aspect should not be a problem. However, several factors keep manufacturing from growing, most of which are low-hanging fruits — once addressed, this could unleash manufacturing sector growth in India.

Paper 1: Is South Asia Ready for Take Off? A Sustainable and Inclusive Growth Agenda.

Launched at Brookings India, the paper was prepared under the supervision of Anne-Marie Gulde-Wolf. Dr. Goretti introduced the paper by providing context on historical growth in South Asia (India, Bangladesh, Nepal, Sri Lanka, Maldives, and Bhutan), where a real take-off is witnessed in the late 1980s and early 1990s after economic liberalisation. India and Bangladesh had development paths similar to other ASEAN countries, but not as dramatic as China and Korea. It is also pertinent to discuss the dramatic drop in poverty levels in the region. This trend is the most striking in India, Bangladesh, and Nepal. Hence, the impact of reforms on the populations of these countries has been significant. Sustained reform efforts are therefore the way to transforming millions of lives. 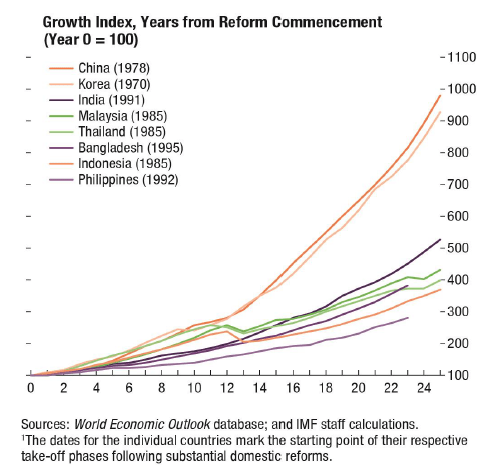 Listed under are the key findings of the paper:

(i) The big question is how to deliver job-rich growth in the region. South Asia accounts for a fifth of the global population with a median age of under 27 years. According to United Nations population prospects, over 150 million youth will enter the labour force by 2040 in South Asia. Hence, the emphasis on jobs is particularly relevant.

(ii) Growth strategies in India’s neighbourhood have either been export-oriented or manufacturing-led, neither of which is very relevant in the current scenario. A balanced solution involves increasing agricultural productivity in South Asia. This will release funds for investment in other dynamic sectors of the economy whilst reducing rural distress.

(iii) A key recommendation was to rely on services as a key driver of growth. In India’s context, the sector has yielded a remarkably high pay-off vis-a-vis the manufacturing sector. However, its pay out is significantly lower in terms of job creation.

(iv) Hence, it is vital to also expand the manufacturing sector. South Asia relies very little on manufacturing, both in terms of value-added and exports. Average exports account for all of 8% of GDP, this average is pulled up by Bangladesh with a manufacturing production of 14% of GDP. Further, there is significant scope to advance manufacturing from a quality standpoint. A focus on labour mobility together with skill upgradations shall expand manufacturing in the region.

(v) Making policy space for reforms is critical for South Asia. There is a pressing need to expand revenue space, accelerate fiscal consolidation, and lower public debt to create space for critical spending. State-owned banks play a key role in the region for financing both public and private investment. But excessive reliance on state-owned banks can induce inefficiencies and lead to resource misallocations.

(vi) Governments must supportprivate entrepreneurship by further liberalising trade and opening up to foreign direct investment (FDI). Progressive strides have been made in this, particularly in India. However, average tariff rates remain high when compared to the rest of the world. In addition to this, many important non-tariff barriers such as caps and complex approval systems have resulted in a much slower integration of the region with the global value chain, especially when compared to China and other peers in the region.

(vii) Other important factors are: improving infrastructureboth in terms of availability and quality; being mindful of sustainability; investing in people by improving education and skills; leveraging digital technology and closing costly gender gaps.

The impact of reforms has been estimated for three reform scenarios: reduction of goods tariff to zero, non-tariff barriers in the trade of services reduced by 30%, and reduction in FDI restrictions in line with global standards. The combined effect of these reform efforts would result in substantial productivity gains. Under this reform scenario, India’s real GDP is projected to grow by 20% over the next 20 years. This translates to an addition of Rs. 100 trillion to India’s economy by 2040. Importantly, this will significantly impact the standard of living (WEO estimates)—the real GDP per capita is projected to increase to 40,000 USD.

The paper also estimates the impact of such reform-led growth on the rest of the world, South Asia, and specifically on the neighbouring countries of Sri Lanka and Bangladesh. The impact is estimated to be over 3% of real GDP in Sri Lanka and Bangladesh because of enhanced productivity due to technology transfers. It would also result in India contributing 15% of the global growth. If all countries in the region follow the same reform agenda, then the region’s contribution to global growth could accelerate to 45%. In the absence of these reforms, centred on India’s current baseline, the country is projected to grow at 6% in the long run. If the reforms are implemented, the long-term growth projection goes up to 6.5%. A down-side scenario, computed for a situation where India fails to exploit the demographic dividend, results in a medium long-term growth projection of 5%.

To conclude, recent elections in most South Asian economies offer a propitious window of opportunity to accelerate the reform agenda and respond to the recent slowdown in growth. Clear communication on the benefits of the reforms and prioritization based on their expected macro-structural impact are key to building reform momentum. Additionally, stronger social safety nets are especially important to support the most difficult structural reforms, notably to labour markets, minimizing their distributional impact on the most vulnerable segments of the population, and promoting strong and inclusive growth. To ensure that the region’s growth path remains as strong and as sustainable, new policies and initiatives need to remain mindful of fiscal, financial, and environmental risks.

This paper looks at the macro-economic impact of structural reform in a wider set of countries—the Emerging Markets and Developing Economies (EMDEs). Some lessons from this more general analysis apply to South Asia and, hence, it is a natural continuance to the first paper. It was presented by Dr. Giovanni Melina, Economist, IMF.

I) The paper starts with the observation that the speed of convergence of per capita GDP in EMDEs remains slow. It accelerated between 1998 and 2007, but it has stalled in the last decade with wide cross-country heterogeneity. There is an increased fraction of countries that have started to diverge. While South Asia has maintained a good speed of convergence there is still ample scope for reforms-led growth.

The questions that then arise are:

(a) What is the average impact on growth and jobs of structural reforms in the areas of (i) domestic finance; (ii) external finance; (iii) trade; (iv) product market; (v) labour market; and (vi) governance?

(b) How do the effects of reforms vary across countries and time, and why?

(II) The first question is answered by the finding that the average impact of major historical reforms is sizeable, although it often materializes gradually. A package of major reforms in each area may raise GDP per capita by over 7% over the next 6 years in an average EMDE. This essentially means a doubling of the speed of convergence of an average EMDE—addressing the second question. However, these average effects hide important sources of heterogeneity.

III) The key finding of the analysis is that unless implemented in the election year, the political cost of reforms is negligible and statistically insignificant—in terms of both vote share of ruling coalition and probability of re-election. The paper suggests that reforms need to be implemented within the first two years of an elected government’s mandate. To conclude, there is a clear case to push structural reforms in South Asia.

G-20, state elections, and the future of the Congress Party

Why has female labor force participation risen in Bangladesh but fallen in India?