Someday, the U.S. will suffer another recession. With interest rates already very low, monetary policy may not be able to carry the entire burden of mitigating economic downturns. Thus, the role of fiscal policy in economic stabilization is being viewed with increasing importance. But with political polarization in Washington, there is concern that Congress won’t move quickly enough to cut taxes or raise spending (known as discretionary fiscal policy) to buffer the effects of a crisis. So economists and others are looking towards expanding provisions in the law that automatically increase spending or reduce tax bills when the economy turns down.

What are automatic stabilizers?

Automatic stabilizers are mechanisms built into government budgets, without any vote from legislators, that increase spending or decrease taxes when the economy slows. During a recession, automatic stabilizers can ease households’ financial stress by decreasing their tax bills or by boosting cash and in-kind benefits, all without changes in the tax code or any other new legislation. For example, when a household’s income declines, it generally owes less in taxes, which helps cushion the blow. Additionally, with a decline in income, a household may become eligible for unemployment insurance (UI), food stamps (Supplemental Nutrition Assistance Program, or SNAP), or Medicaid.

What are the components of automatic stabilizers?

Both taxes and spending can have stabilizing effects on the economy. Most taxes have a stabilizing effect because they automatically move with economic growth. For example, personal and corporate income tax collections decline during recessions along with income and profits, and payroll tax collections decline when employment and wages fall. Spending on some transfer programs also depends on the state of the economy. For instance, outlays for unemployment insurance increase when the unemployment rate rises, and spending on anti-poverty programs like Medicaid and SNAP increases during recessions because bad economic times mean that more people are eligible.

As shown in the chart below, the bulk of the value of automatic stabilizers comes from changes in tax revenues, rather than from spending on programs. According to the Congressional Budget Office (CBO), revenues have accounted for about three-quarters, on average, of the effect of automatic stabilizers on the budget over the past 50 years (CBO 2015). 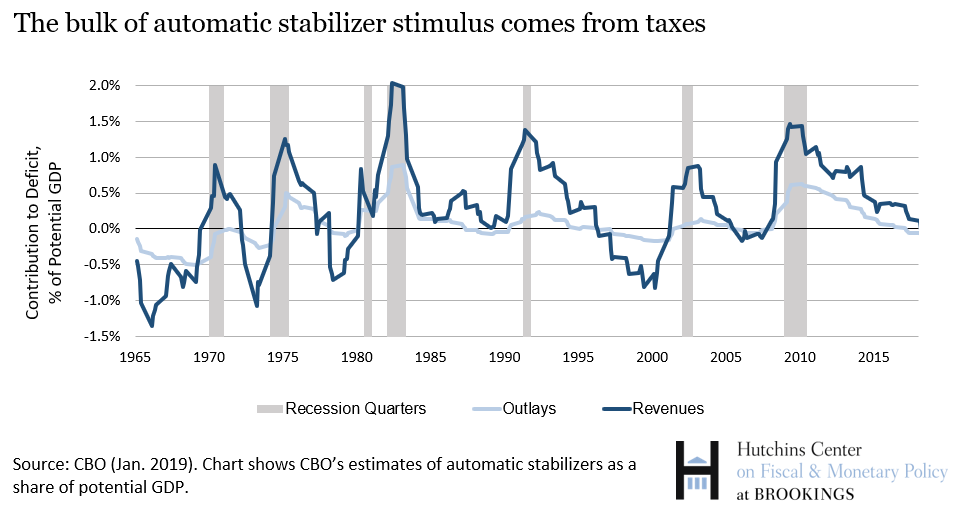 How are automatic stabilizers different from changes in discretionary fiscal policy?

One of the benefits of automatic stabilizers is that they do not require legislative action and respond quickly to economic downturns. Discretionary fiscal policy requires action from Congress, so there may be considerable time lags due to debates on the appropriate response, steps in the rulemaking process, and the administrative actions for funds to reach the pockets of consumers. During the Great Recession, Congress responded relatively quickly: the first fiscal action was the Bush Economic Stimulus Act, which was signed on February 13, 2008, which turned out to be only two months after the recession was later determined to have begun (Furman 2018). But the largest stimulus package, the American Recovery and Reinvestment Act (ARRA) of 2009, was authorized five quarters after the start of the recession. By this time, spending on automatic stabilizers had already grown to 2 percent of potential GDP—the maximum sustainable output of the economy (Schanzenbach 2016). Examining economic stabilization policy from 1980 to 2018, Sheiner and Ng (2019) find that automatic stabilizers provide about half of the total fiscal stabilization, with the other half provided by discretionary fiscal policy.

How have automatic stabilizers changed over time?

The responsiveness of automatic stabilizers to economic conditions has been fairly stable over time. According to CBO, automatic stabilizers averaged about 0.4 percent of potential GDP for each percentage point difference between GDP and potential GDP (“output gap”) from 1965 to 2016. Likewise, Auerbach and Feenberg (2010) find that the federal tax system’s impact as an automatic stabilizer has changed relatively little. Sheiner and Ng find that although the degree of cyclicality of overall fiscal policy has been somewhat stronger in the past 20 years than the previous 20 before that, the contribution to GDP growth of automatic stabilizers in response to a percentage point gap between the unemployment rate and the natural rate has been relatively steady, fluctuating between 0.3 and 0.5 between 1980 and 2008.

How did automatic stabilizers function during the Great Recession?

How do automatic stabilizers work at the state and local level?

What is the case for expanding automatic stabilizers in the U.S.?

Many analysts are worried that we are ill-prepared for the next recession. On average, the Federal Reserve typically cuts interest rates by five percentage points to combat recessions (Summers 2018). But with interest rates still well below 5 percent, monetary policy is likely to be constrained by the zero lower bound, increasing the importance of fiscal policy as a stabilizing tool. Further, with the debt-to-GDP ratio already very high by historical standards, it is unclear whether we can rely on Congress to enact measures to boost the economy during the next recession. But the benefits of using fiscal policy to fight recessions are likely to far exceed their costs.  With interest rates so low, debt isn’t very costly (Elmendorf and Sheiner 2016; Blanchard 2019). Furthermore, to the extent that prolonged joblessness leads to lower labor force participation for an extended amount of time, using fiscal policy to fight recessions may even pay for itself in the long run (DeLong and Summers 2012)

What are some options for strengthening automatic stabilizers?

For automatic stabilizers to be effective, they should be timely and bolster aggregate demand. That is, people who are on the receiving end of a stimulus must get the money quickly, and then actually spend it. However, not all tax cuts or spending programs are created equal: cutting certain taxes or increased spending on certain programs have more “bang per buck.” For instance, lower income households are more likely to spend additional income than are higher income households, who are more likely to have the resources to maintain spending levels during hard times.

Thus, a good way to enhance automatic stabilizers is by strengthening the safety net. One option is to automatically increase the amount of food stamps one can receive during a downturn. This action could be administered quickly by raising the value of electronic benefit cards, and is well-targeted to the most vulnerable families (Bernstein and Spielberg 2016). Another option would be to extend or increase the value of UI benefits (currently, UI benefits are limited to 26 weeks). Indeed, research indicates that policies like SNAP and UI have high “bang per buck” as economic stimulus (Blinder 2016).

But these policies alone may not involve enough stimulus. One alternative could be to provide a temporary, refundable tax credit for working households (Sahm 2019). Refundable tax credits help lower-income households because they receive money even if it exceeds the amount of taxes they owe. On the other hand, a policy that reduces tax rates, which would give disproportionate benefits to higher-income households, may be less effective.

Other policies, such as increasing infrastructure spending or grants to states, may also be helpful by increasing spending substantially, but may not be optimal due to time lags. To get around the timing issue, Haughwout (2019) proposes an infrastructure investment plan that delivers federal funds to state and local infrastructure projects that would be automatically triggered during a recession. Fiedler et al. (2019) propose to tie the share of federal support for state Medicaid and CHIP (Children’s Health Insurance Program) programs to state unemployment rates.

How do automatic stabilizers in the U.S. compare with those in other rich countries? 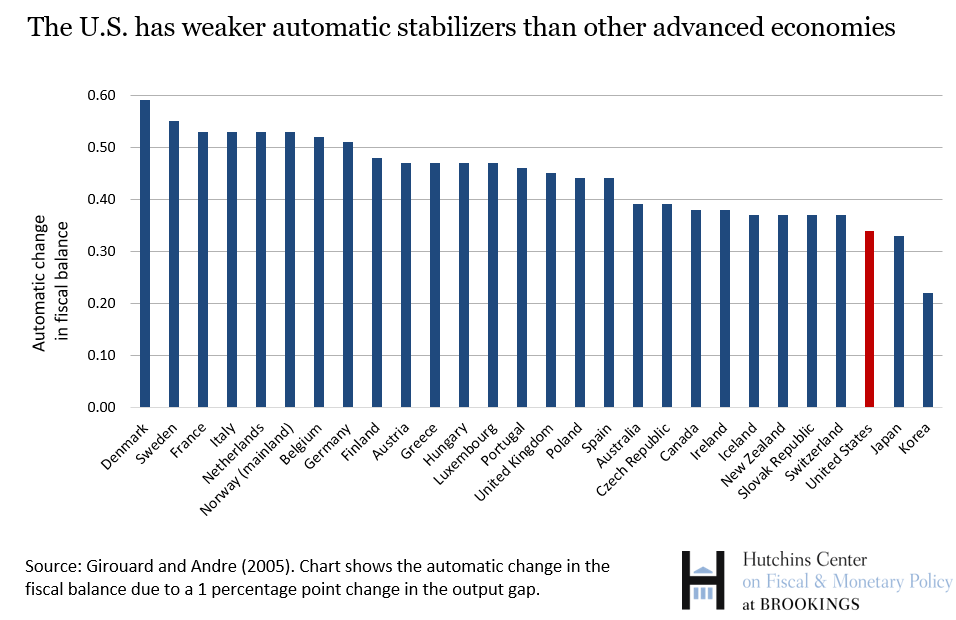