Studies in this week’s Hutchins Roundup find that for-profit schools raise earnings of their graduates but the magnitude of this effect is bigger for men than for women, better monetary policy coordination among countries is not feasible, and more.

Using earnings data for about 77,000 students who entered for-profit post-secondary schools in Missouri in 2005-2009, Christopher Jepsen of University College Dublin and Peter Mueser and Kyung-Seong Jeon of the University of Missouri-Columbia find that, for men who attended certificate and associate’s degree programs, the average earnings gain by the fifth year after school entry, relative to earnings more than one year prior to school entry, is between 32 and 35 percent. For women, the gain is between 25 and 26 percent. The authors say that the gender difference arises because men tend to choose the fields of study with higher returns.

The scope for international monetary policy coordination is very limited

Responding to call from emerging-market economies to advanced economies for more monetary policy coordination, Olivier Blanchard of the Peterson Institute for International Economics argues that, despite spillovers from advanced to emerging market economies, there’s little scope for coordination. Indeed, he argues, there isn’t even a consensus on whether coordination means an increase or a decrease in advanced economy interest rates. Given that and current limits on the use of fiscal policy, Blanchard argues that the best tool available to emerging economies to manage macro and financial stability are restrictions on capital flows.

Chart of the week: Switching jobs pays off through faster wage growth 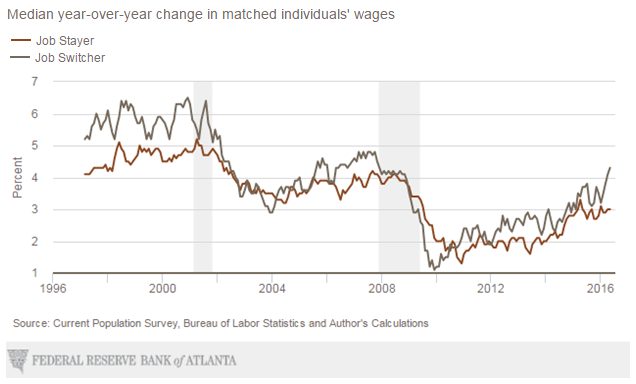 Quote of the week: “Runs and panics are the defining characteristic of a financial crisis,” says Fed governor Daniel Tarullo

“[I]n deciding where–from a prudential viewpoint–to concentrate analysis and policy initiatives within the broad universe of activities that can be described by the term ‘shadow banking,’ it seems to me that the presence of runnable funding is the key, though perhaps not the only consideration. To be sure, this kind of funding remains at levels well below those prevailing before the crisis … But just because the levels of runnable funding are significantly lower than before the crisis does not necessarily mean they are at safe or optimal levels. And it seems quite reasonable to expect that new forms of financial intermediation based substantially on runnable funding could develop in the future… [T]he conditions for destructive runs that threaten financial stability could exist even where no institutions that might be perceived as too-big-to-fail are immediately involved. So I continue to believe that the post-crisis work to create a solid regime to protect financial stability cannot be deemed complete without a well-considered approach to regulating runnable funding outside, as well as inside, the regulatory perimeter.”