Studies in this week’s Hutchins Roundup conclude that global factors might be driving the recent decline in the natural interest rate in advanced economies, the magnitude of fiscal multipliers depends on the level of government debt even in recessions, and more.

Kathryn Holston and Thomas Laubach of the Federal Reserve Board and John Williams of the San Francisco Fed find that the natural rate of interest – the real short-term interest rate consistent with constant inflation absent shocks to supply and demand – has declined over the past quarter-century not only in the U.S., but also in the Euro Area, the U.K., and Canada. They also find significant co-movement in the natural interest rate in these economies over time and interpret this evidence as suggesting that global factors, rather than idiosyncratic national factors, are responsible for the decline.

High government debt can lower fiscal multipliers even in recessions

Using quarterly data on 34 advanced and developing economies over 1980-2014, Raju Huidrom, M. Ayhan Kose, Jamus Lim, and Franziska Ohnsorge of the World Bank show that fiscal multipliers are larger when the level of government debt is lower. This effect is independent of the business cycle: although multipliers are generally larger in recessions, a high level of debt still reduces multipliers in recessions relative to what they would be if the debt were lower. The authors conclude that when a government with a high debt level implements a fiscal stimulus, households are more likely to lower consumption in anticipation of future tax increases and interest rates are more likely to rise, crowding out private investment.

Chart of the week: Interest rates have been declining in advanced economies for a long time now 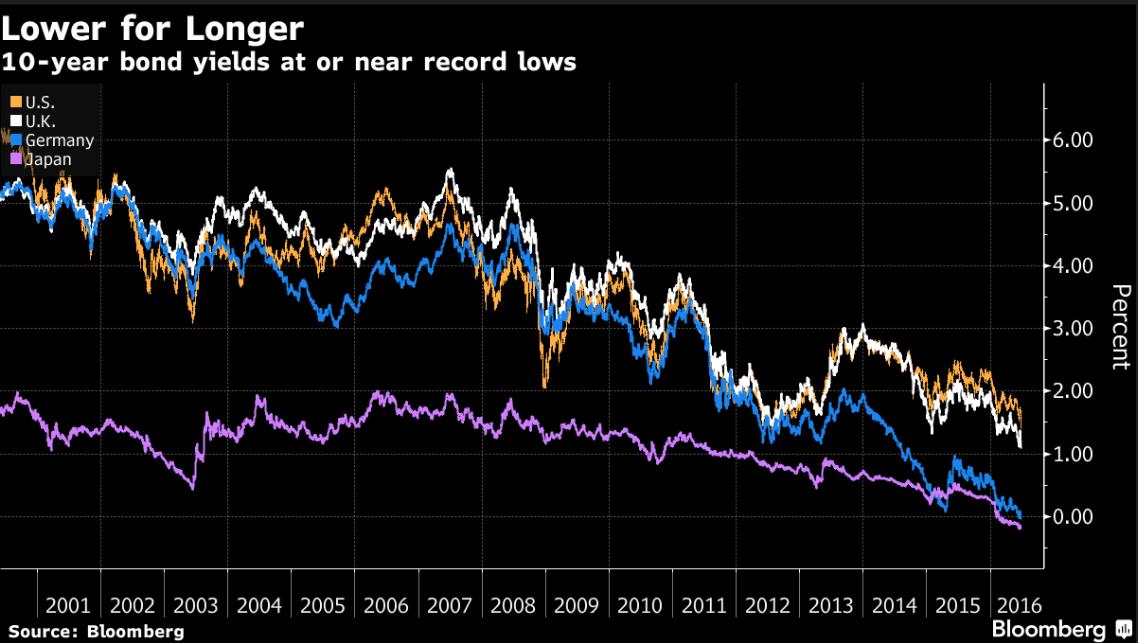 Quote of the week: “[I]t will take some time for the United Kingdom to establish new relationships with Europe and the rest of the world,” says Bank of England official Mark Carney.

“The people of the United Kingdom have voted to leave the European Union. Inevitably, there will be a period of uncertainty and adjustment following this result… Some market and economic volatility can be expected as this process unfolds. But we are well prepared for this… The capital requirements of our largest banks are now ten times higher than before the crisis. The Bank of England has stress tested them against scenarios more severe than the country currently faces. As a result of these actions, UK banks have raised over £130bn of capital, and now have more than £600bn of high quality liquid assets. Why does this matter? This substantial capital and huge liquidity gives banks the flexibility they need to continue to lend to UK businesses and households, even during challenging times… The Bank of England is also able to provide substantial liquidity in foreign currency, if required. We expect institutions to draw on this funding if and when appropriate, just as we expect them to draw on their own resources as needed in order to provide credit, to support markets and to supply other financial services to the real economy.”

– Mark Carney, Governor of the Bank of England