Studies in this week’s Hutchins Roundup find that term premiums are the driving factor of changes of Treasury bond yields, U.S. trade liberalization agreement with China has been advancing Democrats, and more.

Term premiums are the driving factor of bond yield changes

Using surveys of professional forecasters for the U.S., Richard Crump and Stefano Eusepi of New York Federal Reserve Bank and Emanuel Moench of the Bundesbank find that changes in term premiums (the extra yield that investors require to hold longer-term bonds) account for the bulk of the variation in bond yields over the past 30 years. They also find that macroeconomic factors, particularly demand shocks, play a prominent role in changing term premiums and that the decline in long-term bond yields over the past 30 years is primarily due to decline in expected inflation and lower term premiums as opposed to expected future real rates, which have fluctuated around 2 percent.

U.S. trade agreement with China has been helping Democrats

Yi Che of Shanghai Jiao Tong University, Yi Lu of the National University of Singapore, Justin Pierce of the Federal Reserve Board, Peter Schott of Yale University, and Zhigang Tao of the University of Hong Kong find that, the more a county is exposed to trade with China, the greater the share of votes cast for Democrats. Specifically, a county from the 75th percentile in terms of exposure to trade with China has a 1 to 2 percentage points bigger share of votes cast for Democrats in Congressional elections than a county in the 25th percentile, and the 75th percentile county is 2 to 3 percentage points more likely to switch from a Republican to a Democrat representative. The authors also find that during the 2000s, Democratic members of Congress were more likely than Republican members to vote for policies that might limit imports or provide economic assistance to those negatively affected by it.

Using data on all public school 9th graders in North Carolina from 2005 to 2012, C. Kirabo Jackson of Northwestern University finds that algebra and English teachers can have significant effects on students’ chances of graduating from high school by affecting student behaviors such as absences, suspensions, and grade progression even without directly affecting their test scores. Having an algebra teacher at the 85th versus 15th percentile in terms of teacher effectiveness on influencing student behaviors would lead to a 1.2 percentage point increase in the likelihood of high-school graduation. The author interprets this finding as suggesting that evaluating teachers based solely on student test scores might miss a substantial part of their effect on student long-term success.

Chart of the week: Fed and market expectations for the federal funds rate have diverged 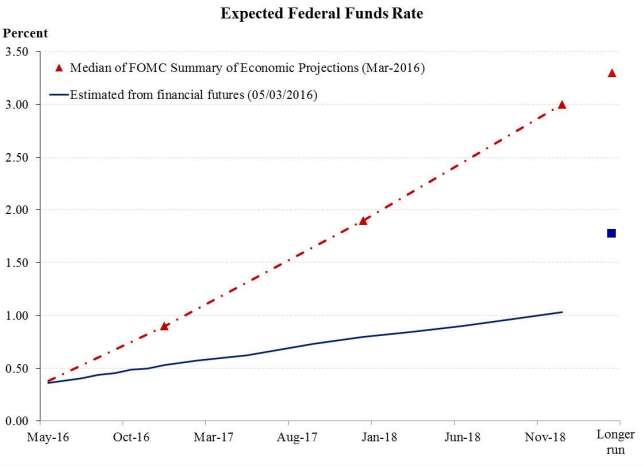 Quote of the week: “In the euro area … the demand deficiencies are … in urgent need of addressing,” says Jason Furman of the Council of Economic Advisers

“In these areas, and in some critical emerging markets like China, the issue is not just the magnitude of demand but its composition. Countries like Germany and China have large current account surpluses but, in the case of Germany, low investment as a share of GDP and, in the case of China, low consumption as a share of GDP. This model for growth is certainly not replicable by all countries. It may also be unsustainable for these countries themselves, particularly in a world with weak global demand. When global central banks are struggling to lift growth and inflation, aggregate demand is itself a finite commodity, meaning that sizable current account surpluses have negative spillovers onto the rest of the world. In many countries, addressing the shortfall in demand will require a balanced approach that relies more on fiscal policy than has been the case to date, either in the form of fiscal expansions or a more measured pace of fiscal consolidation that avoids large or abrupt negative shocks to demand. Such a fiscal policy can be targeted to increase business investment, public investment, private consumption, or whatever is most appropriate in given economic circumstances.”