Studies in this week’s Hutchins Roundup find that macroprudential policies that target the cost of bank capital are the most effective way to contain housing booms, bonus depreciation has a significant impact on investment, and more.

Analyzing data from the Euro-area Bank Lending Survey, Thierry Tressel of the World Bank and Yuanyan Sophia Zhang of the International Monetary Fund find that macroprudential policies that increase the cost of bank capital are the most effective way to restrain mortgage lending and house price appreciation. Policies that tighten loan-to-value ratios are also effective—particularly when monetary policy is loose—but to a lesser degree. The authors add that, because monetary policy and macroprudential policies that target bank capital likely work through the same channels, they should be expected to reinforce one another.

Bonus depreciation has a significant impact on investment

Eric Zwick of the University of Chicago and James Mahon of Deloitte LLP find that periods of “bonus depreciation”—a policy designed to boost investment by allowing firms to deduct investment expenses at a faster pace—have a substantial impact, boosting investment in eligible capital by an average of 10.4 percent from 2001 to 2004 and 16.9 percent from 2008 to 2010 relative to ineligible capital. The authors note that bonus depreciation policies that create immediate cash flows were most effective, and that small firms were nearly twice as responsive as larger firms.

Chart of the week: CBO projects more debt over the next ten years 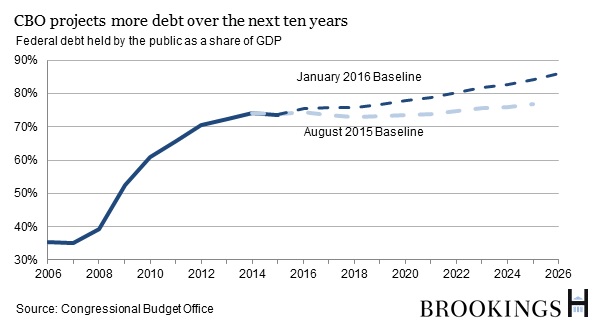 Quote of the week: Bank of England’s Carney: “now is not yet the time to raise interest rates.”

Last summer I said that the decision as to when to start raising Bank Rate would likely come into sharper relief around the turn of this year. Well the year has turned, and, in my view, the decision proved straightforward: now is not yet the time to raise interest rates. This wasn’t a surprise to market participants or the wider public. They observed the renewed collapse in oil prices, the volatility in China, and the moderation in growth and wages here at home since the summer and rightly concluded that not enough cumulative progress had been made to warrant tightening monetary policy.

—Mark Carney, Governor of the Bank of England