This week, the richest business leaders and investors from around the world will gather in Davos, Switzerland, for the annual meeting of the World Economic Forum. In keeping with tradition, a small portion of the agenda will be devoted to global development and the plight of people living at the other end of the global income distribution.

Philanthropy is one way of linking the fortunes of these disparate communities. What if some of the mega-rich could be persuaded to redistribute their wealth to the extreme poor?

This question may feel hackneyed, but it deserves a fresh hearing in light of a dramatic reduction in the global poverty gap over the past several years (Figure 1). The theoretical cost of transfers required to lift all poor people’s income up to the global poverty line of $1.90 a day stood at approximately $80 billion [1] in 2015, down from over $300 billion in 1980. (Values expressed here are in 2015 market dollars.) 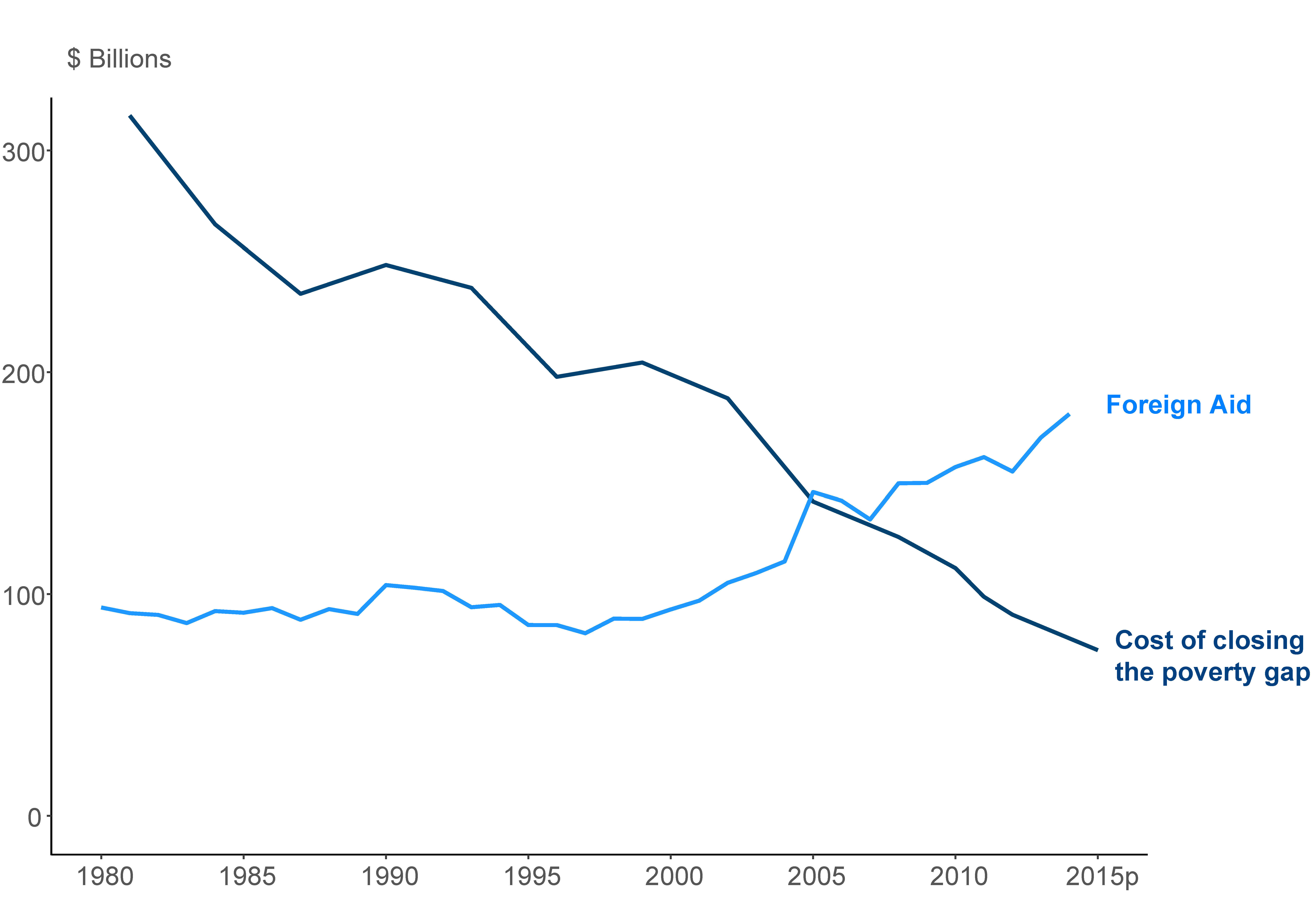 This reduction can be unpacked into two parts. The first is a steep decline in the number of people living below the global poverty line. This is increasingly recognized as one of the defining features of the era. A U.N. goal to halve the poverty rate in the developing world between 1990 and 2015 was nearly achieved twice over. The second and lesser-known factor is the shrinking average distance of the world’s poor from the poverty line. In 1980, the mean daily income of those living below $1.90 was $1.09. In 2012 it was 25 cents higher at $1.34. (Values expressed here in 2011 purchasing power parity dollars.)

Despite this good news, global poverty still demands attention. Hundreds of millions of people continue to suffer this most acute form of deprivation. In several countries, the prospects for ending poverty over the next generation, in line with a recently endorsed successor U.N. goal, appear challenging at best.

Figure 1 illustrates that in 2006, global aid flows exceeded the cost of the global poverty gap for the first time. This suggests that the elimination of extreme poverty should be possible simply through a more efficient allocation of aid. However, this confuses foreign aid’s goals and functions. The bulk of official foreign aid is used in the provision of public goods, such as physical infrastructure and strengthening institutions. Only 2 percent is directed to social payments and their administration. If the elimination of extreme poverty is to be achieved through targeted transfers, it depends on sources other than foreign aid.

The main source of transfers to the poor is welfare programs run and financed by developing countries themselves. These social safety nets have emerged as an increasingly prominent instrument in the toolkit of developing economy governments. Eighty-three percent of developing economies employ unconditional cash transfer programs, although many are small in scale. Several countries are in the process of building the apparatus for more accurate targeting and authentication through the assembly of beneficiary registries and the rolling out of identity programs. In at least 10 developing countries, social safety nets have succeeded in establishing a social floor by lifting all those people under the poverty line up above the threshold. In the vast majority, however, safety nets are insufficiently targeted or generous for that purpose, reflecting not only resource constraints, but also political choices that can be resistant to change.

A complementary approach is to consider the role of private mechanisms and wealth. NGOs were among the original pioneers of cash transfers in the developing world. More recently, the NGO GiveDirectly has designed a compelling new method of charitable giving that sends money directly to the poor using digital monitoring and payment technology. Its approach has received strong endorsements from independent charity assessors and has been validated by impact evaluations. Yet the scale of its existing donations remains tiny relative to the global poverty gap.

This is where Davos’s global elite could come into play: What difference could a philanthropic donation from the world’s richest people make?

To explore this question, we begin by identifying those developing countries that are home to a least one billionaire. (Our analysis is restricted to billionaires by data, not by the potential largesse of the world’s multi-millionaires. We focus our attention on billionaires in the developing world given the traditional focus of philanthropy on domestic causes.) Let’s assume that the richest billionaire in each country agrees to give away half of his or her current wealth among his or her fellow citizens, disbursed evenly over the next 15 years, roughly in accordance with the Giving Pledge promoted by Bill Gates. That money would be used exclusively to finance transfers to poor people based on their current distance from the poverty line. Transfers would be sustained at the same level for the full 15-year period with the aim of providing a modicum of income security that might allow beneficiaries to sustainably escape from poverty by 2030.

Table 1 summarizes the key results. In each of three countries—Colombia, Georgia, and Swaziland—a single individual’s act of philanthropy could be sufficient to end extreme poverty with immediate effect. Swaziland is an especially striking case as it is among the world’s poorest countries with 41 percent of its population living under the poverty line. In Brazil, Peru, and the Philippines, poverty could be more than halved, or eliminated altogether if the billionaires could be convinced to match Mark Zuckerberg’s example and increase their donation to 99 percent of their wealth.

Source: Authors’ calculations based on Forbes, International Monetary Fund, PovcalNet, and the World Bank. Poverty rates post-transfer calculated based on average distance of the poor from the poverty line.

In other countries—Nigeria, Tanzania, Uganda, and Angola—the potential impact on poverty is only modest. A number of factors account for differences between countries, but two factors that penalize African countries are especially noteworthy. First, the depth of poverty in Africa remains high, with 15 percent of the population living on less than $1.00 a day; and second, Africa has relatively high prices compared to other poor regions, which means more dollars are required to deliver the same amount of welfare.

For those nations that have more than one billionaire, an alternative scenario is that the country’s club of billionaires makes the pledge together and combines resources to tackle domestic poverty. This would end poverty in China, India, and Indonesia—countries that rank first, second, and fifth globally in terms of the absolute size of their poor populations. The last two columns of Table 2 describe the results.

Source: Authors’ calculations based on Forbes, IMF, PovcalNet, and the World Bank. Poverty rates post-transfer calculated based on average distance of the poor from the poverty line.

This exercise is of course laden with simplifying assumptions.[2] It is intended to provoke discussion, not to provide definitive figures. Moreover, it is open to debate whether transfers represent the most cost-effective way of sustainably ending poverty, the extent to which transfers ought to be targeted, the efficacy of building private transfer programs alongside public safety nets, and whether cash transfers represent the most appropriate use of billionaires’ philanthropy.

What is less contestable is that a falling global poverty gap presents an opportunity for more systematic efforts for poverty reduction. This raises the question: How low does the poverty gap have to fall before we explicitly design programs to bring the remaining poor above the poverty line? We would argue that we are already beyond this point, not least in countries that remain a long way from ending poverty. Were a billionaire at Davos to commit to using his or her wealth in this fashion, it could trigger a powerful demonstration effect of innovative solutions—not just for other billionaires, but for countries that are currently at risk of being left behind.

[1] The cost of the global poverty gap in 2015 is an overestimate compared with the World Bank’s tentative poverty estimate for the same year. This is due to a different treatment of Nigeria. For this exercise, we rely on data from the 2009/10 Harmonized Nigeria Living Standards Survey reported in PovcalNet, despite its well-documented problems, whereas the Bank draws on the 2010/11 General Household Survey.

[2] Simplifying assumptions include: zero administrative costs in identifying the poor, assessing their income, and administering payments with no leakages, or no portion of those costs being borne by billionaires; the efficacy of administering miniscule transfers to those who stand on the margin of the poverty line; and no change in the cost of closing the poverty gap in a country over time, whether due to population growth, an increase or decrease in poverty, or a change in prices relative to the dollar.