According official statistics, the Russian economy has been in recession for four quarters, and the decline is accelerating. Neither experts nor government officials are yet ready to declare that economy has hit rock-bottom. This recession has already become the longest in the post-transformation history of Russia, when the planned economy was replaced. Despite this, the Russian authorities have so far declined to carry out any major policy response to the crisis, leaving many economists scratching their heads. 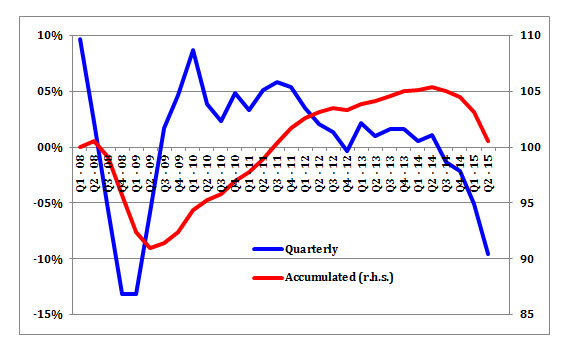 From slow growth to recession

Russian authorities could not have failed to miss this fact. However, instead of targeting real improvement in the investment climate, the government has focused its efforts on improving Russia’s position in the World Bank ranking of ease of “doing business,” for which many of the indicators are based on formal assessments, such as the number of days required to file a claim in court, and the number of days it took for the case to proceed. Based on such specific measures, the quality of the

Russian judicial system ranks higher than that of the United States. Meanwhile, by mid -2014 the Russian economy had stopped growing.

In February 2014 the Kremlin ordered the annexation of Crimea, and in April the same year sponsored an armed rebellion in the east of Ukraine, with regular Russian troops instigated the uprising in mid-summer. Military adventures may have given President Vladimir Putin a big political dividend, but they greatly worsened Russia’s economic plight in the form of a sharp outflow of capital, a depreciation of the ruble, and accelerated inflation. Following the imposition of sanctions on Russian banks and companies by the U.S. and the EU, Russian businesses were forced to draw on domestic savings and foreign exchange reserves of the central bank for the payment of foreign debts. Matters were compounded by a rapid decline in oil prices beginning in July 2014 (oil and its attendant refineries represent half of Russian exports). That is how the recession began in Russia.

Differences between now and the 2008 crisis

The current economic crisis in Russia is totally different from the crisis of 2008.

In 2008, the Russian economy experienced a sharp fall in external demand, mainly for raw materials, and suffered a steep decline in industrial production and cargo turnover. At the time, the Russian government reacted smartly to this challenge. Reduced external demand was offset by a build-up in domestic demand from an increase in budget expenditures—social expenditures (mainly pensions), capital injection in the banking sector, and budget guarantees for the real sector.

In the current crisis, the Russian population is bearing the brunt of the fallout, with real incomes and living standards having plummeted. Three consecutive actions taken by the government to offset the impact of the crisis—currency devaluation at the beginning of 2014, food embargoes, and currency devaluation at the end of 2014—pushed  consumer inflation to 17 percent by the end of March 2015, which led to a 10 percent drop in real incomes. Meanwhile, the rise in import prices and an almost 40 percent decrease in the volume of imports reduced the physical consumption of many goods.

It may have seemed that devaluing the ruble at the end-2014 might create incentives for the growth of Russian exports, but that did not happen as the production of raw materials and commodities in Russia is much more limited by the supply side (in the case of oil and refineries) or demand side (metals and gas) rather than by prices—Russian companies typically have low to medium production costs compared to international peers. In this situation, the Russian government could have tried to boost the economy by raising public demand, by increasing budgetary expenditures (as in 2008), or by easing monetary policy. Instead, policymakers did neither.

The traditional central bank response to a recession should be an easing of monetary policy. However, the Central bank of Russia (CBR) has chosen to forgo this route, as the easing of monetary policy during periods of falling oil prices has previously led to speculative pressure on the ruble. So it was in the winters of 2008-2009 and 2014-2015. In both episodes, the CBR spent significant amounts of its foreign exchange reserves, but could not alleviate the pressure on the ruble. And in both cases the attack on the ruble ended as soon as the CBR abandoned its efforts to keep the ruble from weakening and started to tighten the money supply.

This approach, on the one hand, inevitably lowers the real sector’s and household’s demand for credit and leads to a further drag on the economy. On the other hand, a devaluation of the ruble is inevitably accompanied by the acceleration of inflation. Approximately half of consumer goods on the Russian market are imported, and a weak ruble pushes prices up (the elasticity is about 0.1, i.e., a rise in the price of the dollar by 10 percent leads to an increase in inflation of 1 percent within six months). In turn, the increase in inflation increases inflationary expectations and keeps the CBR from reducing interest rates. Caught in the middle of trying to balance economic growth, the exchange rate, and inflation, the CBR has so far been unable to clearly articulate its policy.

Sanctions have played their part

In the mid-2000s Russian budget-makers began building a solid insurance against crisis and falling revenues. The government sharply reduced the public debt, which by mid-2014 amounted to less than 10 percent of GDP, and established two reserve funds that accumulated a windfall from oil exports. In the beginning of 2014 they amounted to $176 billion (8.6 percent of GDP). Given those funds were invested mainly in foreign currency assets, they were well protected from devaluation.

One would think this represented a sound basis for the easing of fiscal policy as oil prices declined. However, Russian authorities did not go for it as the finance ministry was not able to raise financing for the growing deficit. Due to the imposition of Western sanctions, foreign financing became very expensive, domestic interest rates skyrocketed due to inflation and the CBR’s rate hike, and privatizations were put on hold. As reserve funds remained the only one guaranteed source of deficit financing, the Russian government, possibly foreseeing a further worsening of the budgetary situation, decided not to boost budgetary expenditures but to limit the use of reserve funds.

Consequently, the revision of the federal budget in February 2015 resulted not in boosting expenditures but in their reallocation—the 10 percent sequestration of all non-military expenditures except social payments was accompanied by a marginal increase in the size of the indexation of pensions and the release of a small amount of funding for interest rate subsidy programs that worked well in 2009 (car loans, mortgages, export support, etc.). Budget planners looking ahead to 2016 faced more severe constraints, requiring not only a freeze on wages and a reduction in the amount of indexation of pensions, but also military spending cuts and tax increases for oil exporters. Obviously, those solutions, as well as further cuts in investment spending, will lead to a further reduction in demand in the Russian economy.

Stability will only come with reform

A shrinking economy with low oil prices and high inflation creates a vicious circle for the Putin government. Falling incomes and the inability to finance the budget deficit by borrowing leads to budget cuts and further declines in domestic demand. During 15 years of Putin’s rule, the Russian economy has become enormously fragile and volatile. In the current crisis the government cannot make any decision in monetary or budgetary policy without risking making the situation worse. With a no-action policy, all hopes of recovery are pinned to the prospect of rising oil prices. But if Russia will not address the root causes of the crisis—property rights protection on the basis of the restoration of rule of law and political competition—no amount of increase in oil prices will make the Russian economy more stable.

Getting the world unstuck on the Sustainable Development Goals