This weekend, more than 150 world leaders will gather at U.N. headquarters to adopt the Sustainable Development Goals (SDGs) for 2030. In the lead-up to the summit, many independent analysts are taking stock of the Millennium Development Goals (MDGs), the global guide star for anti-poverty efforts over the period from 2000 to 2015. Several of them, including journalists, have been asking me whether any MDG success stories exist to help inform the new global goals.

In my view, there are three key parts to answering this question. First, we can point to roughly 15 million success stories, measured in lives saved. Second, these victories are global, but the majority have taken shape in sub-Saharan Africa. Third, in order to understand the nature of the successes since 2000, we need to look beneath the crucial but ultimately crude benchmarks of MDG target achievement.

1. Tallying the successes: 8.8 million children and over 7 million AIDS survivors

In their annual progress reports, organizations like the U.N. have historically focused on presenting the absolute levels of change. For example, they might compare the number of children who die in one year with the number who die in a later year, and count the difference as the measure of the world’s success. A different way to measure success is to look at pre-existing trends and search for accelerations in the rate of progress. Last year I published such a study, estimating the incremental number of children’s lives saved due to accelerated improvements in child survival since the launch of the MDGs.

The methodology estimates the number of incremental lives saved under two counterfactual scenarios for children under-5 mortality rates (U5MR). “Counterfactual A” extrapolates each country’s average annual rate of progress from 1990 to 2000, and extends the same trend to the most recent year (in 2014 the U.N. provided data through to 2013). “Counterfactual B” is more conservative, and extrapolates the rates of progress from 1996 to 2001, recognizing that the early 1990s were worse than the late 1990s for many countries, and also that global MDG policy efforts only really started to get off the ground in 2002.

Earlier this month, the U.N. released new estimates of all countries’ under-5 mortality rates for both 2014 and 2015, in addition to revised estimates for many countries over earlier years. The new data allowed me to update the “lives saved” estimates accordingly.  All numbers should still be considered preliminary, in light of ongoing revisions to the underlying data, plus the fact that the year of 2015 is not even yet behind us. Nonetheless, Figure 1 shows the core results, and how the world has been “bending the curve” downward on child deaths. 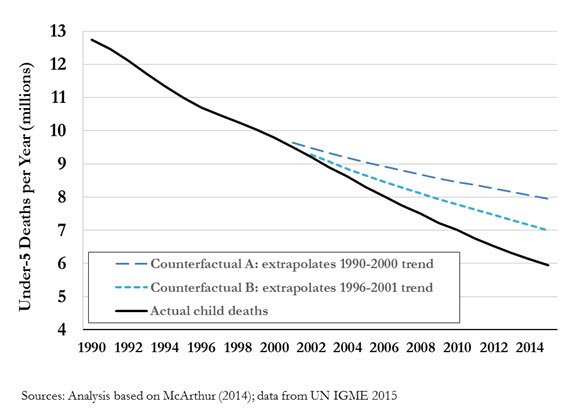 Crucially, it’s not just children under-5 whose lives have been saved since 2000. The next biggest category of lives saved is probably for people with AIDS who now receive life-saving antiretroviral medicine. Back in 2000, there were no international efforts to provide AIDS treatment at a time when 25 million people were estimated to be HIV-infected in Africa alone. Thanks to the successful launch and scale-up of global policies and institutions—especially through the Global Fund to Fight AIDS, TB, and Malaria and the U.S. Presidential Emergency Program for AIDS Relief—an estimated 7.8 million AIDS-related deaths have been averted. Official data do not count exactly how many of the 7.8 million lives are for children under-5, but a back-of-the-envelope calculation suggests it adds up to a few hundred thousand.

Some simple arithmetic shows that, under the most conservative estimates, at least around 15 million people (8.8 million under-5 plus at least 7 million AIDS survivors) and perhaps as many as 25 million people (17.3 million plus at least 7 million) are alive today thanks to dramatically accelerated global efforts since 2000. These efforts have been underwritten, in part, by roughly a tripling of development assistance for health. Each of these lives saved is a global success story.

2. The greatest gains are in Africa.

Many people believe that China and India are responsible for most of the world’s development success stories over the past generation. Figure 2 shows why that simplistic narrative does not hold. At least in terms of child survival—arguably the most objective and resonant measure of development in all corners of the world—sub-Saharan Africa is responsible for the lion’s share of accelerations in progress. Note that even China and India saw accelerations in U5MR declines since 2000, but Africa is responsible for 80 percent of the gains under the more conservative Counterfactual B, and 73 percent under Counterfactual A. 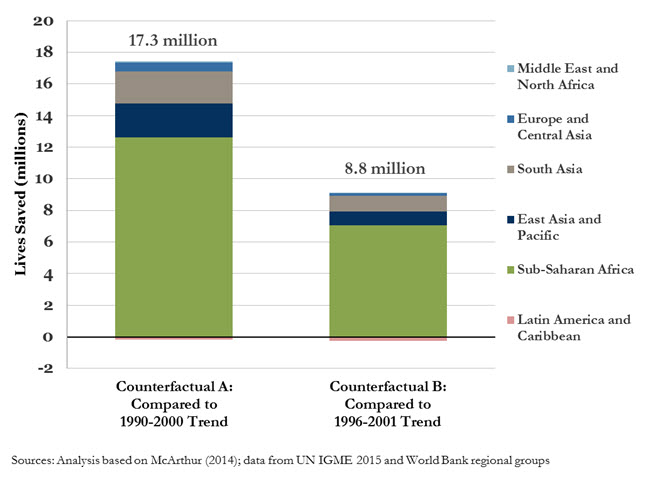 One of the paradoxes of the MDGs is that many of the countries that have achieved the greatest gains under the MDGs—defined as accelerations in progress—have not actually achieved the MDGs. And many of those accelerations might well be a product of the world’s simple reiteration of the MDGs as policy objectives among countries and their international partners—day after day, month after month, year after year.

Table 1 shows that, under Counterfactual B, only 20 countries are estimated to have been responsible for more than 92 percent of the children under-5 lives saved. Only nine of them, less than half, are estimated to be achieving the MDG target of a two-thirds reduction in U5MR between 1990 and 2015.  While again stressing the importance of not interpreting these preliminary figures with any false precision, it is noteworthy that the two countries with the largest estimates of incremental lives saved, Nigeria and India, will both fall short of the MDG target: Nigeria has reduced U5MR by 49 percent since 1990, and India has reduced it by 62 percent.  But both have registered important accelerations in progress since 1996-2001.

Table 1: Children under-5 lives saved under Counterfactual B (compared to 1996-2001 trajectory) 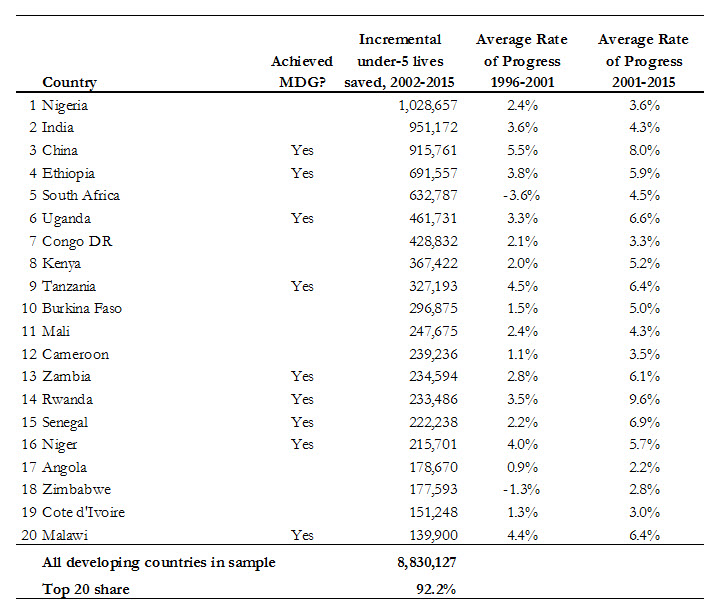 It is also noteworthy that 18 of the 20 countries in Table 1 are in sub-Saharan Africa. Nigeria is especially notable at the top, since it has been such a prominent MDG proponent. In 2005 the country achieved a major debt relief deal, negotiated by then-finance minister Ngozi Okonjo-Iweala, on the condition that the savings would be allocated towards domestic MDG investments. Amina J. Mohammed was given a senior ministerial-level role, as senior special assistant to the president on the MDGs, to figure out how to translate the resources into results on the ground. The MDGs for education and health framed the core of the task for her and many other senior government leaders. Ms. Mohammed held the MDG role for a previously-unheard-of tenure spanning three successive presidents, prior to being appointed, in 2012, as the U.N. secretary-general’s special adviser to help coordinate the global post-2015 goal-setting process.

The new SDG agenda is daunting in its scope and ambition. It is also of critical importance. As the world approaches the relevant complexities, we should heed the experience of people like Ms. Mohammed and so many of her colleagues across Nigeria, and indeed around Africa and the rest of the globe. They confronted business-as-usual to develop new pathways to success in many of the places where it was least expected. In doing so, they have provided us all with millions of success stories to draw from. As we look at the challenges to 2030 and beyond, we undoubtedly need countless millions more.