U.S. monetary policies have a significant impact on the policies of other central banks

Analyzing data on 30 emerging market and small advanced economies between 2000 and 2014, Boris Hofmann and Előd Takáts of the Bank for International Settlements find that US monetary policies have significant spillover effects on other economies’ short- and long-term interest rates, even after controlling for macroeconomic and global financial factors. This suggests that, with closely integrated economies and financial markets, central banks in these countries find it difficult to conduct monetary policy based purely on domestic conditions.

Using data on 40 countries from 1965 to 2010, Alexander Chudik of the Dallas Fed, Kamiar Mohaddes of the University of Cambridge, M. Hashem Pesaran of the University of Southern California, and Mehdi Raissi of the International Monetary Fund find that there is no generally applicable threshold for the relationship between public debt and economic growth. However, the authors note that rising debt-to-GDP ratios are associated with lower long-term growth, suggesting that debt trajectory can have a more significant impact on growth than the actual level of debt.

Caroline M. Hoxby of Stanford University and George B. Bulman of the University of California, Santa Cruz, conclude that the tax deduction for tuition and fees has virtually no impact on college attendance. The authors argue that some simple modifications might increase the effectiveness of the deduction. For example, the IRS could notify households of the total value of the deduction in the year prior to college attendance, when college decisions are actually being made. The tuition paid by the student could then be reduced and the colleges paid directly by the Treasury.

Chart of the week: U.S. median household income, adjusted for inflation, was at the same level in 2014 as in 1996 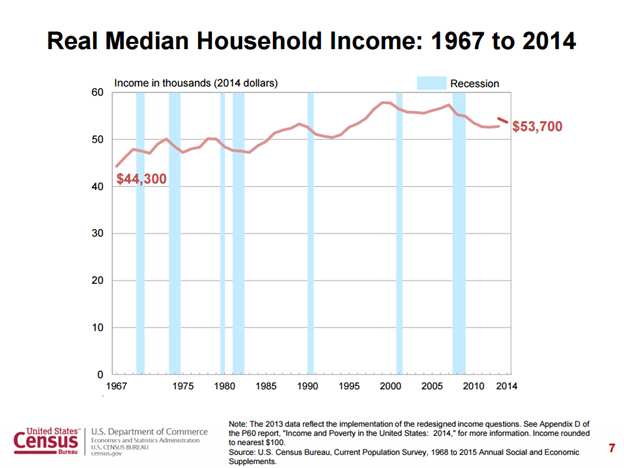 Quote of the week: ECB: Failure of policymakers to address structural and institutional issues is “preventing our monetary policy from producing a stronger and more sustained recovery”

…[C]entral bank policies should not be interpreted as a cause of low interest rates but rather as a consequence of economic malaise and disinflationary pressures, which the central bank aims to forestall… Addressing those factors with determination can accelerate the process of “normalization”. That implies on our side the full implementation of the asset purchase program, on which the cyclical recovery hinges. And it implies on the side of other policymakers addressing the structural and institutional factors that are preventing our monetary policy from producing a stronger and more sustained recovery. In other words, a lasting return to normalcy depends on all policymakers playing their part – and the longer others wait, the greater the hurdles that the euro area will ultimately have to climb.

– Peter Praet, Member of the Executive Board of the European Central Bank