Olivier Blanchard of the International Monetary Fund, Christopher J. Erceg of the Federal Reserve Board, and Jesper Lindé of Sveriges Riksbank argue that, if interest rates remain low for an extended period of time, fiscal expansion in the euro area core countries would provide a significant economic boost to periphery countries. They suggest that a euro area fiscal union that provides room for distressed economies to engage in deficit-financed spending could generate substantial benefits.

John Cawley of Cornell University and David Frisvold of the University of Iowa find that less than half of the tax levied on sugary drinks in Berkeley, California, is being passed through to consumers, a rate much lower than previous estimates had suggested. The tax is designed to increase prices, thereby decreasing the consumption of sugary drinks. The authors suggest that the tax may not have been fully passed through to consumers because the tax was implemented at the city level and consumers could travel a short distance to avoid the tax or because stores were still in the process of adjusting prices at the time of the study.

Comparing economic projections prepared for the Fed’s Federal Open Market Committee for 1997 to 2008 to the results from three benchmark methods, Andrew C. Chang of the Federal Reserve Board and Tyler J. Hanson of Hopper (a data-driven travel company) find that staff projections are significantly more accurate than the benchmarks over a one-quarter horizon, but begin to be surpassed at the one-year point. Fed staff projections of the unemployment rate and consumer spending do better than those for inventories, government spending and inflation.

Chart of the week: Fed toolkit 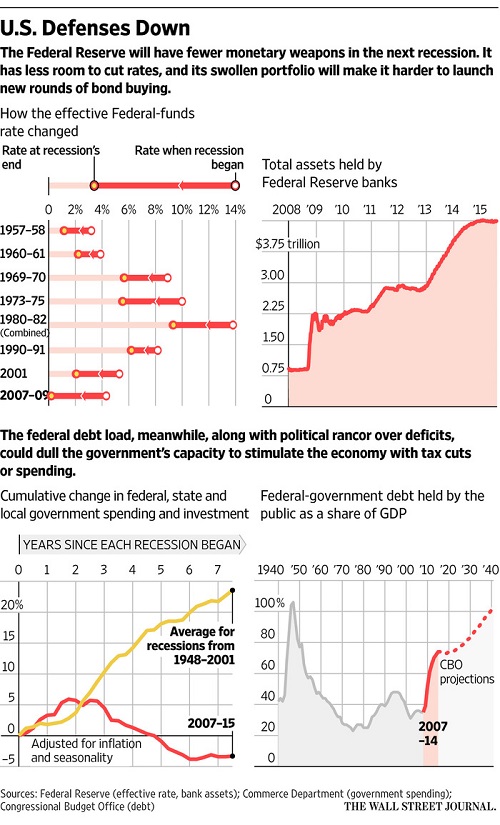 Quote of the week: ECB sees participation in the Euro as “irreversible”


It is crucial for the stability of the euro area that there is no doubt that participation in the euro is irreversible. Now there is such doubt. The discussion about Grexit has undoubtedly caused instability in this respect. It is like a fine hairline crack that can lead to a major fracture. Consequently, it has to be repaired now. This is particularly important for us as a central bank. We do not decide who belongs in the euro area. That is a political decision. But the ECB’s working assumption is that a country’s participation in the euro is irreversible. This is also how we have dealt with Greece and why the provision of liquidity to Greece could be sustained.

– Benoît Cœuré, Member of the Executive Board of the European Central Bank