Make no mistake: There is no substantial progress in the so-called negotiations between the Greek government and its creditors. The ruling Syriza party feels pretty uncomfortable with them, and, thus, by trying to kick the can down the road, it can put off the hard choice it will need to make between accepting a painful agreement that will damage the party’s popularity or an even more painful economic collapse for the country. Some commentators perceive Greece as disorganized, exhausted, and weak, and believe the country will ultimately sign an agreement. However, there is just as much evidence to suggest Syriza is ready to say “no” to the creditors’ demands. Prime Minister Alexis Tsipras is weighing both options, no doubt about it, although as the government is in a desperate cash crunch and having drained the last drops of domestic cash from public entities and organizations, a prospective failure in negotiations will just make a future disaster much bigger if it comes.

In the meantime, Greece’s economy is experiencing the so-called Curley[1] effect. As many as 200,000 mostly young, skilled workers have already migrated to escape from poor career prospects, unemployment, and low wages. These are voters that also cannot bear the old-style, redistributive egalitarianism of the new government and are rapidly leaving the country. University professors and researchers, doctors and scientists, entrepreneurs, and people generally working for the financial sector, most of them in productive age groups, constitute the majority of people migrating abroad. This trend strengthens Syriza’s appeal among those that remain, mostly the non-privileged, the unskilled, the unemployed, the youth, and pensioners, but also at least in part public servants whose position was threatened by the agreements with the creditors so far. So the way that the electorate is shaped strongly favors Syriza. And that has made Syriza more aggressive in the talks and, as a consequence, a prospective agreement more politically difficult and tricky.

However, reaching an agreement is still the most likely scenario by far. As Greece’s economy is currently under a terrible financial strain, a possible new loan from the European Stability Mechanism (ESM) will possibly come with additional last minute revenue measures, meaning a new tax storm for the middle class. This seems to be silently accepted, if not encouraged, by the creditors but the risk is again that economic activity will be seriously halted. As can be seen from Table 1, revenues are now again above 50 billion euros, as they were during the 2007-2010 period, with GDP now 50 billion euros lower. So there is no room for more taxes and more revenues if the recovery is to be salvaged. Again. Another impressive number to note is the huge 20 billion euro decrease in expenditures between 2011 and 2014, which should not be taken for granted. Again, the important thing here is the restructuring of expenditures by cutting any waste left. 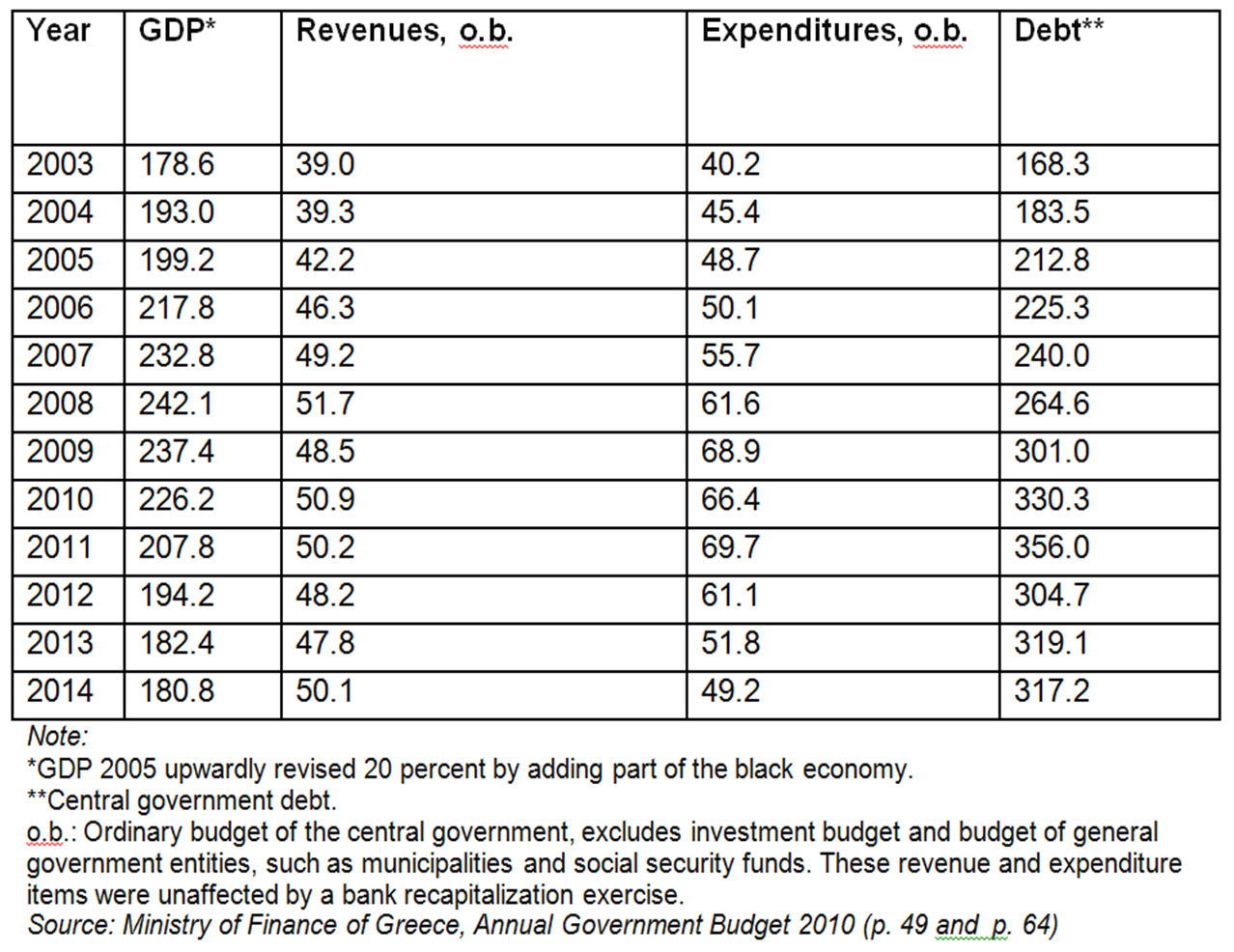 2014 was a relatively good year for the economy with a 0.8 percent growth rate, a 1.5 percent increase in consumption, and 0.6 percent increase in employment. The primary balance and consumer and industrial confidence were all up. Given how bleak things look at the moment, it’s hard to believe 2015 could be a bonanza for the economy, but it could. The euro has weakened, European Central Bank President Mario Draghi is doing a great job, fuel prices have collapsed, and Jean-Claude Junker, the European Commission president, is said to be willing to help Greece by pouring more money into the economy through a new investment plan. But the best thing is that Greece’s trading partners are also beginning to do much better.

So, a favorable external economic environment might be another incentive for the Greek government to take the agreement offered by the creditors. But as the devil is always in the details, the worry is that both parties will agree to overtax the economy again and thus counter any prospects of recovery for the coming months.

Jennifer Warner
Tuesday, May 24, 2022
Get daily updates from Brookings