Kate Ho and Joseph Hogan of Columbia University and Fiona Scott Morton of Yale University find that because Medicare Part D enrollees are unlikely to change plans once enrolled, plan providers have responded by increasing premiums. The authors conclude that from 2007-2009, if enrollees were more attentive, expenditures per enrollee would have been $536 lower, and the government would have saved $550 million.

Using data from the 2009 American Recovery and Reinvestment Act, Bill Dupor of the Federal Reserve Bank of St. Louis and M. Saif Mehkari of the University of Richmond find that, for every $1 million in stimulus money received by school districts, expenditures increased by $570,000, with 70% of this increase attributable to capital expenditures. Despite the increase in expenditures, employment remained largely unchanged, likely due to the temporary nature of the stimulus funds.

Chart of the week: Involuntary part-time work down sharply since mid-2014 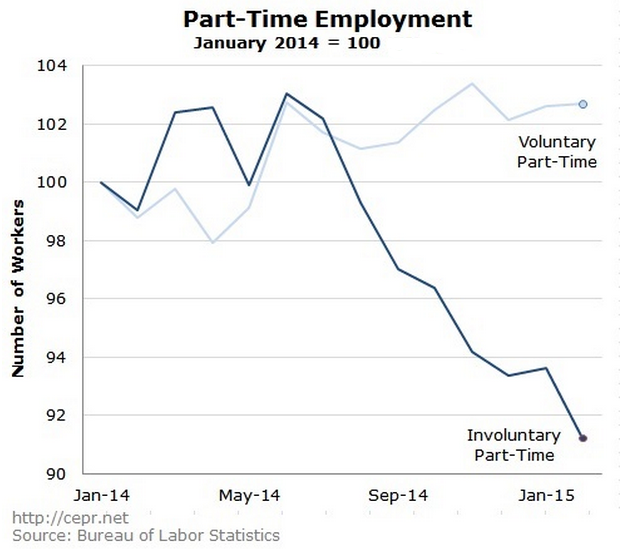 “All this suggests a persistent period of low inflation globally is a possibility, and as I mentioned a few moments ago, could itself create a self-fulfilling fear of a bad outcome. Concerns that household or government debt will weigh on demand could cause firms to delay further their already weak investment spending. Such rational corporate caution is consistent with the behavior of many financial asset prices, which appear to be pricing the possibility of material downside tail risks, such as that economic weakness and persistently low global inflation become mutually reinforcing.”
–Mark Carney, Governor of the Bank of England