Timbuktu. To many, the name evokes a place of mythic remoteness. To others, it connotes an ancient crossroads of trade, exotic goods and culture. And still others know it as the sacred intellectual capital of the Muslim world, synonymous with universities, debate and religious tolerance. Tragically, Timbuktu most recently conjures memories of the 2012 occupation when armed groups, including al Qaeda-linked jihadists, committed grave human rights abuses, damaged mausoleums and shrines, torched manuscripts and banned music, the very lifeblood of Mali. Thanks to the resilience and ingenuity of the local population, and an international military intervention supported by the U.N. and led by the French, the extremist occupation failed.

A UNESCO World Heritage site, Timbuktu symbolizes both the challenges and the potential of Africa, themes that have drawn 50 heads of state to Washington for the first U.S.-Africa Leaders Summit. The renaissance of Timbuktu as a beacon of tolerance, wisdom and innovation – all signature characteristics of its Golden Age – has immeasurable symbolic power in the Sahel and Middle East and North Africa (MENA) regions, where sectarianism and brutal intolerance are on the rise.

The Government of Mali fully supports this initiative under the leadership of the Minister of Culture Mrs. N’Diaye Ramatoulaye Diallo, whose motto upon taking office was to place “culture at the heart of socioeconomic development.”

Leading representatives of the Malian government including President Ibrahim Boubacar Keita and his ministers of culture, foreign affairs, investments and religion joined members of the Timbuktu Renaissance Action Group which convened artists, scholars, diplomats, philanthropists, investors and technologists, for three days of meetings at Brookings’s 2014 U.S.–Islamic World Forum. The group explored how best to revive Timbuktu as an educational, cultural and spiritual center of Africa. The consensus was that Timbuktu not only can lead Mali’s reconciliation and recovery, but can also provide a model for post-conflict recovery, sustainable development, and countering violent extremism (CVE) that can be scaled and replicated trans-Sahel and MENA. 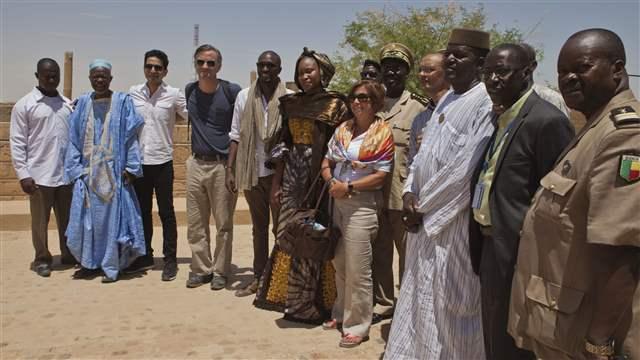 To lay the groundwork, the Timbuktu Renaissance co-directors recently returned to Timbuktu with Minister of Culture Diallo, social entrepreneurs and representative of the Google Cultural Institute. With Manny Ansar, producer of Timbuktu’s famed Festival Au Désert, and Salem Oud Elhaj, Timbuktu’s venerable sage and historian as our guides, we were able to maximize the daylight hours the MINUSMA flights allowed. (Commercial flights have yet to return to Timbuktu.)

For Manny Ansar, his first return to Timbuktu since he’d fled for his life to a Burkina Faso refugee camp in the spring of 2012 was bitter sweet. He noticed the relative trickle of people in the streets (a large percentage of the population remains in exile). The main square, which once hosted a bustling market, stood empty save for the scar of the blasted monument at its center. However, Manny also recognized the familiar smiles and waves, the warm Malian hospitality…the resilience.

Everywhere people asked Manny if he was bringing the Festival Au Désert back to Timbuktu. Why would locals care so much about a music festival? In the last decade, the festival has become the most celebrated musical pilgrimage on the continent, drawing musicians and fans the world over. Banned from holding the festival in Timbuktu, Ansar has taken worldwide as a Festival in Exile.

Back in Timbuktu, the return of music and the expulsion of the occupiers restored hope, joy and pride. For culture lies at the very heart of Timbuktu’s identity, and is vital not only to the population’s spirit, but also to its sustenance.

To quote the mayor of Timbuktu, during our visit, “Culture is not just for pleasure (‘un divertissement’), it is essential for the economy.“ He went on to detail the economic devastation after tourism disappeared. “Timbuktu has 70 guides; each supports 10 people. None has been employed since 2012.”

The same themes dominated our meetings with the mayor, the governor and the imam of the Djingareyber Mosque:

The meeting with Timbuktu’s grand imam produced a moment of levity when he perked up at the mention of Google representatives in our midst. “Google?! I was the first person in Timbuktu to go online,” he declared with a grin, before leading us on a personalized tour of the 600 year old Mosque.

Distinguished Professor in the Practice of Diplomacy - Georgetown University

From the Mosque we caravanned to “La Maison,” a boutique hotel where dignitaries and international music stars alike stayed while attending the Festival au Désert. Weeks after the festival in 2012, the occupiers overran the building and began dispensing their brutal “justice” in those very rooms, executing summary judgments, lashings and amputations.

In TR’s strategy, La Maison will be transformed into Timbuktu’s Center for Culture and Innovation – providing much needed recording artist and TV studios, computers with white space connectivity, university exchange and training programs and NGO support facilities. The center will help alleviate the lack of professional training, as well as gathering places for youth, all lamented by the Timbuktu officials we met.

The TR’s additional priorities are: the return and live stream of the Festival au Désert to Timbuktu; and until then, its continued touring incarnation as a Festival in Exile; an accompanying feature documentary film and film-festival tour; star-infused compilation albums; the restoration and traveling museum exhibition of the famed manuscripts (in the context of a larger Treasures of Timbuktu exhibition); and a virtual Timbuktu website and content aggregator.

Consider its historic significance. Gold, salt and literature held equal value in Timbuktu, once the largest university town in the world. The birthplace of the Blues, or, to quote Bono, “the big bang of all the music we love,” Timbuktu has an unparalleled festival and music legacy. Its treasured manuscripts, peppered with the acceptance of diversity and plurality that is Timbuktu’s calling card contain prescient analyses of issues from human rights to corruption, to debates on the efficacy and ethics of slavery.

With its unique significance, Timbuktu has the capacity to disrupt sectarianism and radicalization, and within the context of a renaissance, to transform the image of Mali, Africa and Islam.

Cheick Abdel Kader Haidara, to sneak hundreds of thousands of manuscripts out of occupied Timbuktu, explained that he has devoted his life to preserving these unique historical documents, “not for myself; not only for Mali, but for all of humanity.”

The challenge for Mali, and, arguably, for “all of humanity” is this: will the attack on Timbuktu serve as a wake up call to revive this great center of learning and culture, with its timely model of tolerance and plurality? Or, will the fabled city of gold continue to spiral with its beacon as a spiritual center of science, justice, philosophy, commerce and the arts fading to black?

Yes, Timbuktu evokes remoteness. But, taking into account the universality of its wisdom, in fact, this city of 333 saints, to quote its music icon Ali Farka Touré, sits “right at the heart of the world.”


Read about the related event, The Timbuktu Renaissance Initiative Reception »