On Easter night, five children—four girls and a boy—ranging in age from eleven to fifteen were walking away from a park in the South Side of Chicago when a car approached them and the occupants asked the children if they were members of a particular gang. Before they could answer, or as they began saying “no”—reports differ on that point—the occupants fired shots at them. These were kids, walking away from a park, in one of our nation’s many impoverished neighborhoods. Poverty is an unfortunate reality for more than one out of five children, or approximately 16 million children, in this country. And all too often, that means living in a community in which the risks of crime are high, opportunities are limited, and fear of violence has shaped daily lives and altered childhoods.

Previous work by The Hamilton Project emphasized the challenges facing low-income families in this country. That policy memo highlighted the stark fact that nearly 20 percent of American families with children are officially classified as poor—which for a family of two adults and two children means having an annual income of less than $24,000—and an additional 30 percent have sufficiently low income that they live with many of the same stressors that come from being poor. It also emphasized the challenge of food insecurity facing many Americans, with approximately 22 percent of our nation’s children living in households in which parents worry about having enough food to feed their family. Another Hamilton Project policy memo examined the limited economic mobility for low-income individuals in this country. As just one example, a child born to the lowest income quintile, or to the poorest fifth of parents, has a 43 percent chance of remaining in that income quintile, or being very poor, as an adult.

This month The Hamilton Project highlights another major obstacle in the lives of our nation’s poorest citizens: the very real threat of crime. Compared to other developed nations, the United States has relatively high rates of violent crime; indeed, among all Organization for Economic Cooperation and Development nations, the United States ranks third in rates of intentional homicide, fourth in rates of rape, and eighth in rates of robbery. And much of this crime falls disproportionately on America’s poor.

The figure below, drawn from a forthcoming set of economic facts on crime and incarceration, shows that victimization rates for all types of personal crimes are significantly higher for individuals living in low-income households. In 2008—the latest year for which data are available—the victimization rate for all personal crimes among individuals with family incomes of less than $15,000 was over three times the rate of individuals with family incomes of $75,000 or more. The most prevalent personal crimes for low-income victims are assault and acts of attempted violence, at 33 victims and 28 victims per 1,000 persons age twelve or older, respectively. 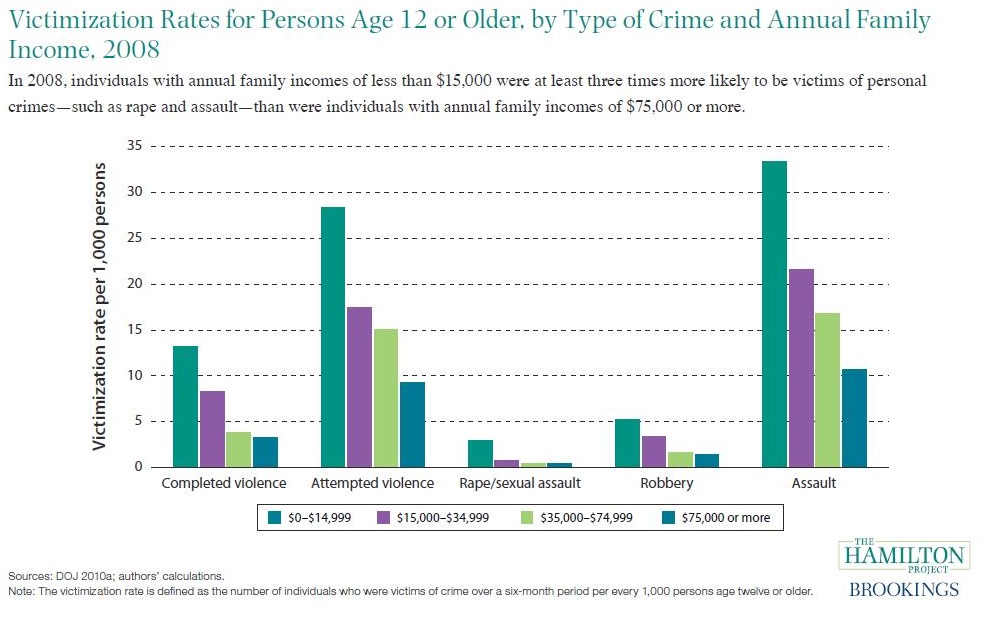 Crime carries a host of social and economic costs, often with long-lasting impacts on its victims. In addition to the direct costs of crime, such as costs associated with injury and out-of-pocket expenses, victims of crime—particularly violent crime—often suffer from emotional harm and subsequent lost earnings. Furthermore, children who are victims of violence (such as sexual assault and child maltreatment), who witness violence in their families, or who are exposed to other major incidents of violence tend to suffer from higher rates of depression and anger or aggression.

America’s poorest families not only face higher risks of crime, but also face a higher likelihood that a member of their family will be incarcerated. The rate at which minority men in particular are incarcerated means disruption to their families and neighborhoods. Sadly, having an incarcerated parent is a fact of life for 2.7 million American children. As described in our forthcoming set of economic facts, for an African American child whose father does not have a high school diploma, there is roughly a 50 percent chance that his or her father will be in prison by the time of the child’s fourteenth birthday. That so many of our nation’s children—poor, minority children, in particular—grow up with an incarcerated parent makes their chances of success that much harder.

Rates of crime and incarceration disproportionately impact low-income and minority communities, and contribute to the social and economic marginalization of the poor. As our nation grapples with the intertwined challenges of poverty, income inequality, and low economic mobility, crime and crime-fighting strategies should be considered an important part of the landscape that perpetuates the cycle of disadvantage; they are both a cause and consequence of underlying economic and social problems that perpetuate disadvantage for America’s poorest families.

Later this week, The Hamilton Project will release three new papers—two discussion papers and a set of economic facts—aimed at informing our nation’s policy conversation about crime and incarceration in the United States. Each discussion paper offers a new policy proposal for addressing the high rates of crime and incarceration in this country, in particular among disadvantaged populations and communities.

The discussion paper by Jens Ludwig and Anuj Shah puts forth a policy proposal aimed at changing the rate at which poor youth respond to situations with “automatic behaviors,” which can often mean criminal actions. For youth growing up in distressed communities with a high threat of victimization, automatic behaviors can take the form of violent responses since many of them instinctively assume that those around them have negative intent. Teaching youth from disadvantaged families to slow down and consider the implications of their actions, through interventions such as the “Becoming a Man” (BAM) program, has been shown to have immediate and significant effects on crime rates. One randomized controlled trial of BAM found that participation in this type of intervention reduced violent-crime arrests by 44 percent during the program year for youths exposed to this program. Lowering rates of violent crime committed by adolescents not only leads to less victimization, but also to improved life outcomes for the offending youth.

A second discussion paper by Steven Raphael and Michael Stoll proposes a three-part framework for reducing rates of incarceration while maintaining relatively low rates of crime. First, they propose reforms to sentencing practices that would give greater discretion to those involved in sentencing. This indeterminacy in sentencing would help to ensure that only those who pose a legitimate threat to society remain behind bars, and would create incentives for inmates to reform their behavior. Second, the authors propose reforms to “truth-in-sentencing” laws that tend to lengthen prison stays. Lastly, they propose that states implement fiscal incentives for county governments to limit their use of state prison systems.

To help spur the policy debate on these important issues, these proposals will be discussed during a Hamilton Project forum on Thursday, May 1st at the National Press Club in Washington, DC. The full agenda and registration for the event and live webcast can be found here. The new papers will be available on The Hamilton Project website (www.hamiltonproject.org) on May 1st at 10:00 a.m. ET.

The collateral consequences of state-sanctioned police violence for women

Webinar: How we rise — Policy solutions to upend structural racism and inequality