Acting Secretary of Labor Seth Harris has been making the rounds to promote the Obama Administration’s plan for raising the minimum wage from $7 to $9. In a new paper that compares strategies to improve the earnings of low-income households, we find that increasing the minimum wage would go a long way to help those in the bottom-third of the income distribution who are currently supported by sub-$9/hour earners. The higher minimum wage would boost these household’s earnings by about 19%. 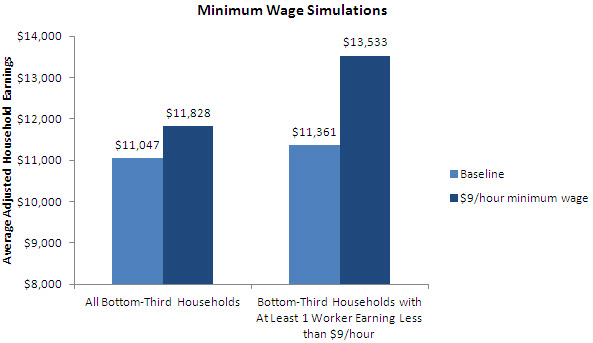 Many of the earners in the bottom third are already making more than $9/hour, so by itself, raising the minimum wage would only improve average annual earnings for the entire bottom-third by a modest 7 percent. But there’s reason to believe this might be too modest an estimate: If you currently earn $9.50/hour, the new minimum wage won’t have a direct impact on your earnings, but a higher minimum wage might cause your boss to give you a modest raise in order to retain someone with slightly more experience or skill. If a higher minimum wage causes employers to bump up pay for workers who currently earn just above $9/hour, then the impact on average earnings for the bottom third would be higher.  It’s also possible that if work paid more, then more low-skilled workers would be incentivized to find minimum-wage jobs. While some argue that a higher minimum wage would dampen employers’ willingness to hire workers the best evidence concludes that any impact would be minimal.

Overall, we think that a higher minimum wage should be one part of a larger strategy to improve the economic prospects of low-income families. Alone, it won’t make a big impact, but combined with policies that lower unemployment, boost earnings (e.g., the Earned Income Tax Credit), and improve education, it could help more families move into the middle class.