Most Americans aspire to join the middle class, but many are failing to do so. In 2011, there were 36 million working-age (25 to 55), able-bodied[1] adults in the United States whose low wages or insecure attachment to a job in combination with their family responsibilities put them in a low-income household. By low-income we mean a household in the bottom third of the income distribution. For one reason or another—lack of a job or low wages—they have failed to achieve the American dream. In this paper we look at who they are, why their incomes are low, and what might be done to help them climb the ladder and join the middle class. Throughout the paper we compare them to their more fortunate counterparts, those in the top two-thirds of the income distribution. In 2011, the upper two-thirds had an average income of approximately $65,000 while bottom-third households had only $14,000.

We focus on short, intermediate, and longer-term policies that might improve the economic prospects of low-income households. In the short-run, what they most need is jobs. In the intermediate term, even if they were employed, many of them would not earn enough to support a family unless their wages were boosted by programs such as the Earned Income Tax Credit (EITC) or a higher minimum wage. In the longer-term, they need better education and stronger families. Accordingly, we look at each of these four paths to moving more low-income households into the middle class, showing what each might achieve based on new estimates of the impact of each strategy on annual earnings.

We look first at who is a part of this bottom third group and why their incomes are so low. Our data are for 2011 (the most recent year available) and come from the Census Bureau’s annual survey of households in the U.S. We begin the paper with a focus on total household income. After showing that most income comes from earned sources, we then focus entirely on annual earnings adjusted for family size.[2] One reason we do so is because the evidence suggests that earnings are more accurately reported in the data than income.

In summary, we find that low-income households are disproportionately female, minority, and young. Most of these households have minor children at home, and many are headed by single parents. Their low incomes are partly due to their low wages, but even more to a lack of employment. Sixty percent of bottom-third household heads don’t work at all or work less than full time, while only 40 percent work full time (40 hours a week for 50 weeks a year or 2000 hours in total). In the upper two-thirds, 86 percent of household heads work full time. Another reason for the greater success of the upper two-thirds is that they are more likely to have two earners in the family. In short, and not surprisingly, a scarcity of second earners combined with a shortage of work hours and low pay rates keep the bottom third out of the middle class. However, the most important reason by far for the low incomes of these households is a lack of work. They are less likely to be employed and work fewer hours when they do hold a job. We refer to this as the “work gap.”

We then do a series of simulations to determine what might help the bottom third improve their prospects and find that some of the work gap is related to the high unemployment rates that existed in 2011. Were the economy to return to full employment, the earnings of these low-income households would increase by 15 percent and the relative earnings gap between them and the upper two-thirds would narrow considerably. This 15 percent increase reflects the impact of a stronger economy on both the availability of work, including full-time work, and higher pay. While a full-employment economy will help this group of low-income households substantially, it will not move them very far up the ladder.[3] Larger improvements in their economic status will require that they work more (even when jobs are available), obtain more education, and/or live in families with more working-age adults and/or fewer dependent children.

Even when the economy is at full employment, a work gap remains. Some individuals have trouble finding work even when jobs are plentiful because of factors such as a lack of education or skills, health problems, or a prison record. In addition, some of the work gap appears to be voluntary. Based on their own reports, many of these low-income individuals have retired early (before age 55), have returned to school as adults, or are keeping house, even though, according to the data, these activities clearly leave them and their households with a low income (less than $26,000). They may be supplementing their low incomes by drawing down their savings or by getting help from friends or relatives. They are also much more dependent than more affluent households on government assistance. Overall, one quarter of their income comes from non-earned sources, especially government programs such as unemployment insurance, welfare, veteran’s benefits, disability payments to children in the household, and educational assistance. It is possible that the availability of such non-earned income has encouraged or permitted them to work less than they otherwise would. However, we believe based on other research that such effects are relatively modest.[4]

We also find that a higher minimum wage would have very small effects on this group. When we ask what would happen to the annual earnings of low-income households if all of the workers in these families earned at least $9 an hour, as recently proposed by President Obama, we find that the higher minimum wage would increase their annual earnings from $11,047 to $11,828, or by 7 percent[5], although by more than this if a higher minimum wage encouraged employers to adjust their pay practices for employees earning more than the new minimum and not just for those currently earning less than $9 an hour.[6] It is worth noting that 36 percent of low-income households contained at least one person earning less than the minimum wage. Other policies, such as a generous EITC and child care assistance may be even more helpful because they more strongly encourage (or facilitate) work in addition to supplementing income (or reducing household expenses).

Lack of education is clearly a problem for these low-income households. However, when we estimate the effects of increasing the high school graduation rate from 77 percent to 90 percent, we find that average household earnings improve by only 3 percent.

These households would also tend to move up the ladder if more of them had two earners. A surprising number of them have a second working-age adult in the household who was not employed at all in 2011. We find that if these adults were employed, low-income household earnings would rise by 22 percent. This effect would be even larger if fewer of these households were single parents and thus had another potential earner in the household. For example, when we increased marriage or cohabitation between single mothers and unrelated men who—based on their age, education, and race—looked like appropriate partners, we were able to increase the incomes of all low-income households by 4 percent. 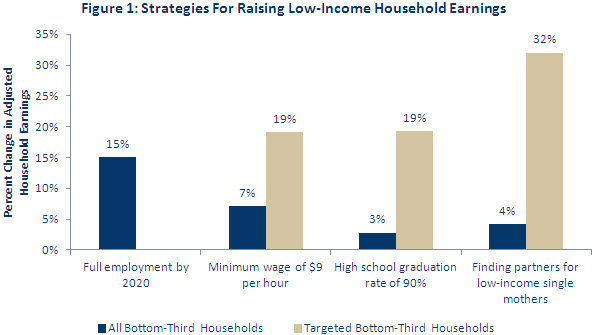 These estimates also do not take into account the likelihood that behavior may change in response to some of these impacts. For example, a higher minimum wage may induce more people to work. The presence of a second earner may cause the household head to work less, and so forth. Where such responses are likely to be important, we report on their likely magnitude in the sections that follow.

[1] Adults are considered to be “able-bodied” if they did not receive any type of disability income in the previous year.

[2] See appendix. Note that the family size adjustment causes the income reported to be lower than the non-adjusted figures for any family with more than one person and is one reason that our average income figures are lower than in some other reports.

[3] Our definition of full employment is the level of unemployment that Congressional Budget Office (CBO) predicts will prevail at the end of the current recession, projected to be 5.4 percent in 2020.

[4] The increase of unemployment benefits during the recession has been estimated to reduce employment by about a quarter of a percentage point, for example. See Levine (2013) and Rothstein (2011).

[6] This does not include any effects of a higher minimum wage in both encouraging more people to work or in discouraging employers from hiring the less skilled. Based on other research, we believe both effects would be small, as well as potentially offsetting.

[7] Note that, since improving the labor market is expected to impact all low-income households, we do not show a target group for the full employment simulation.