A gender-sensitive approach to disaster risk management is smart, because women not only are among those most affected by disasters, but they also play significant roles in disaster response and risk reduction. At our event on April 22 (Earth Day), I’ll share these and other findings from

Why do we need to consider gender in disaster risk management?  Women and girls are typically at greater risk from natural disasters than men—particularly in low-income countries and among the poor—and as a result, a natural disaster can exacerbate existing inequalities and can lead to new forms of discrimination.

At the same time, women play significant roles in all stages of disaster and climate risk management, often at the frontline as responders and by bringing valuable resources to disaster and climate risk reduction and recovery.  Also, their critical role in the social and economic well-being of their communities makes it crucial for them to be active participants in disaster risk reduction, response and recovery efforts. 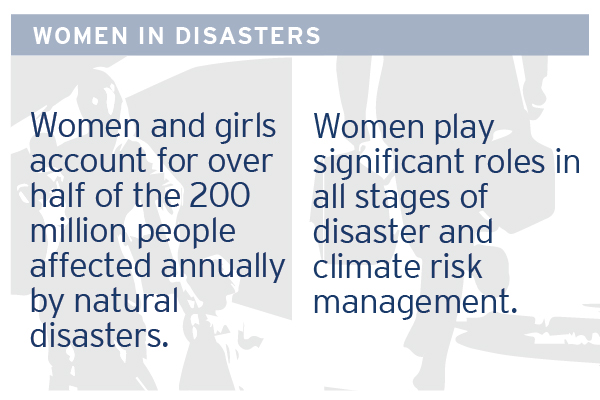 Yet, in practice, disaster risk management policies and processes throughout the world largely exclude the important work already being done by women.

Disaster risk reduction that delivers gender equality is a cost-effective win-win option for reducing vulnerability and sustaining the livelihoods of whole communities.

The effective and meaningful participation of women in policymaking, programming and implementation is crucial to increasing success in all phases of disaster risk management. This participation, combined with timely and adequate attention to the gender aspects of disasters and climate change, can in turn lead to greater gender equality and strengthen the resilience of entire communities.