The young adult population in the United States is becoming increasingly diverse, reflecting what our colleague William Frey has called a “diversity explosion … bubbling up the age structure from young to old.” Asian, Latino, and multi-racial populations are growing rapidly and represent the next generation of American workers, while the slower-growing white population is aging.

In a recent paper, Unemployment among Young Adults, we show that the white share of the U.S. young adult population age 18-29 declined 20 percent between 1990 and 2013, falling from 72 to 56 percent of the total. The Latino share increased by 80 percent over the same time period, the Asian share doubled (albeit from a small base, growing from 3 to 6 percent) and the black share held fairly steady, increasing from 13 to 14 percent. Young people of this age group are transitioning from school to the work world.  Although the timing will vary (in large part depending on whether they enroll in post-secondary education and for how long), at some point most of these young people will enter the labor force seeking full-time employment and adult careers. 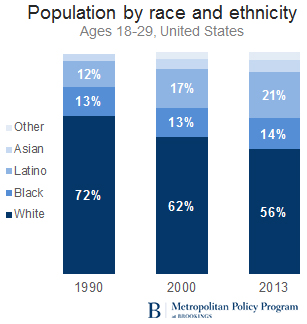 The same demographic pattern plays out in metropolitan areas across the country with some variation, as our exploration of these trends in the metro areas of Chicago and Louisville showed.

In the Chicago region, for example, whites accounted for 63 percent of the young adult population in 1990 and fell to less than half—48 percent—by 2013, while the Latino population grew from 14 percent to 25 percent and the Asian population expanded from 3 to 6 percent. The share of black young adults remained fairly stable, shifting modestly from 19 percent to 18 percent.

In the Louisville metropolitan region, the white share of the 18-29 population dropped from 85 percent to 73 percent during that period, and the percentage of young adults who are black grew from 13 percent to 16 percent. Latino and Asian populations in the region are smaller than the national average but also growing. 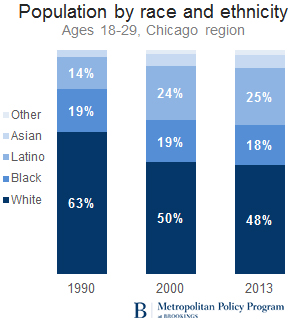 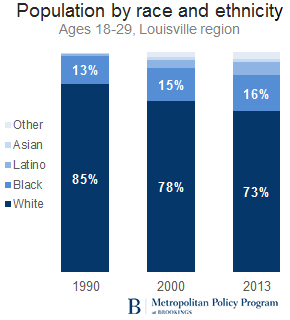 At the same time, the current workforce is aging. Nationally, the share of workers over age 55 increased 50 percent from 2000 to 2013, from 14 to 21 percent.  And that trend will continue and accelerate in coming years. As Frey notes, the waves of baby boom retirements will not end until 2030, and absent growth in minority populations the labor force eventually would start to shrink.

Yet the current employment and educational stats on young blacks and Latinos are troubling, both for their individual prospects and for the national economy.  Recent related work shows that by their early 20s, young white adults are more than twice as likely as their black and Latino peers to have earned a bachelor’s degree. Given the strong correlation between education and employment, it’s not surprising that young blacks and Latinos have higher unemployment rates than whites, although discrimination can’t be ruled out either. Nonetheless it’s clear that increasing the skills, educational attainment, and employment rates among young people of color is a major challenge facing both the nation and individual metropolitan labor markets.