As the nation’s white population ages and stagnates, the childbearing population is increasingly made up of minorities, who are increasingly drawn to the suburbs. In fact, whites are hardly the lifeblood of suburban growth anymore. As noted in my book, “Diversity Explosion,” whites contributed to only 9 percent of total suburban population growth in the nation’s 100 largest metropolitan areas between 2000 and 2010.

Nearly one-third of large metropolitan area suburbs experienced absolute declines in their white populations over the decade. The greatest white losses occurred in suburbs surrounding large coastal cities—New York, Los Angeles, and San Francisco—where the cost of living helped drive whites to less expensive parts of the country, as well as the suburbs of northern industrial areas including Detroit, Cleveland, and Buffalo. 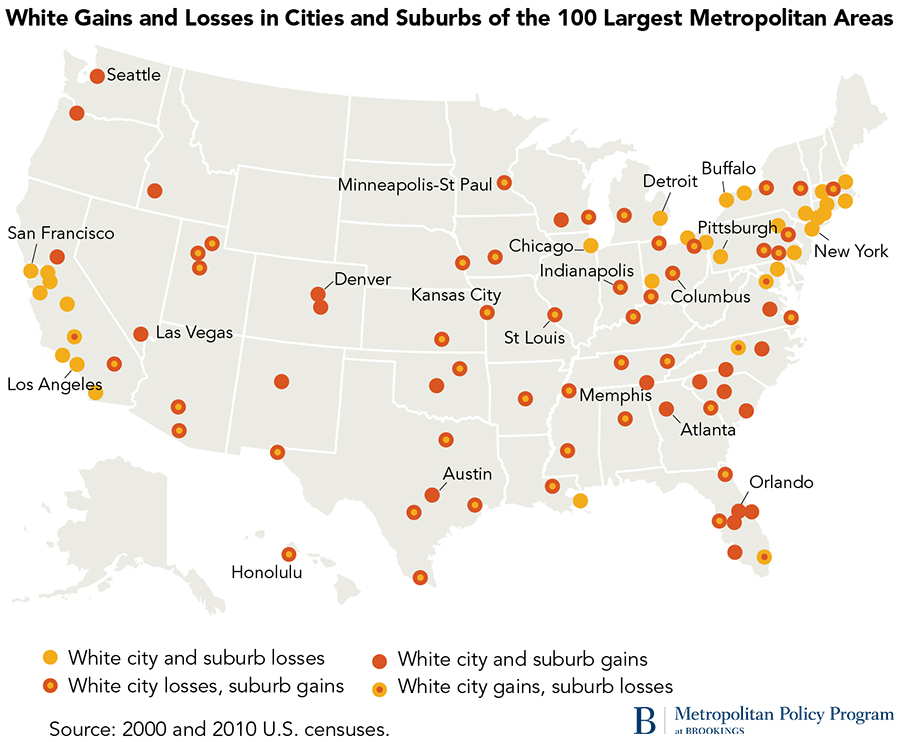 The above map depicts the geography of white population changes in cities and suburbs over the decade. More than one-quarter of the 100 largest metropolitan areas experienced white losses in both cities and suburbs. Less than half (45) of the these areas followed the traditional patterns of white city loss and suburban gain—including Midwest areas such as Columbus, Kansas City, and Minneapolis-St. Paul.

Yet, 23 of these large metro areas recorded white gains in both cities and suburbs. Such places—which include Austin, Denver, Atlanta, and Las Vegas—are located primarily in the growing parts of the Sun Belt, and  have been attracting whites from parts of the country that are either more expensive or are in a state of economic decline. Whites even dominate population gains in a few suburban areas including those in the Des Moines, Provo, Louisville, and Omaha regions.

Yet in nearly 80 percent (78) of the 100 largest metropolitan suburbs, such as those of Los Angeles, New York, San Francisco, and Chicago, minorities accounted for most or all of the population gains. Suburbs will continue to grow in the future, but increasingly as a result of the rapid growth of the nation’s growing young minority families.