In a recent blog we described new research by George Graetz and Guy Michaels that shows the impact of automation technology in productivity statistics. So now there is good evidence that robots are a driver of economic growth.

However, this new evidence poses a question: Has productivity growth from robots come at the cost of manufacturing jobs?

Between 1993 and 2007 (the timeframe studied by Graetz and Micheals) the United States increased the number of robots per hour worked by 237 percent. During the same period the U.S. economy shed 2.2 million manufacturing jobs. Assuming the two trends are linked doesn’t seem farfetched.

Of course, correlation is not causation, and there is no shortage of alternative explanations for the decline in U.S. manufacturing. Globalization, offshoring, and skills gaps are just three frequently cited causes. Moreover, some researchers, like MIT’s David Autor, have argued that workers are benefiting from working alongside robots.

So is there a relationship between job loss and the use of industrial robots?

The substantial variation of the degree to which countries deploy robots should provide clues. If robots are a substitute for human workers, then one would expect the countries with much higher investment rates in automation technology to have experienced greater employment loss in their manufacturing sectors. Germany deploys over three times as many robots per hour worked than the United States, largely due to Germany’s robust automotive industry, which is by far the most robot-intensive industry (with over 10 times more robots per worker than the average industry). Sweden has 60 percent more robots per hour worked than the United States thanks to its highly technical metal and chemical industries. 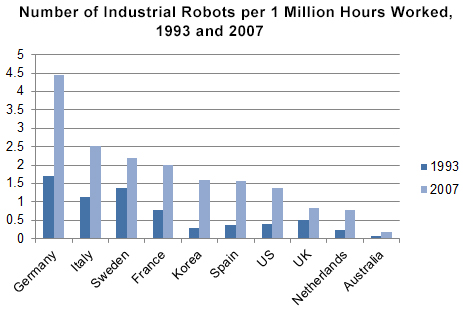 Yet the evidence suggests there is essentially no relationship between the change in manufacturing employment and robot use. Despite the installation of far more robots between 1993 and 2007, Germany lost just 19 percent of its manufacturing jobs between 1996 and 2012 compared to a 33 percent drop in the United States. (We introduce a three-year time lag to allow for robots to influence the labor market and continued with the most recent data, 2012). Korea, France, and Italy also lost fewer manufacturing jobs than the United States even as they introduced more industrial robots. On the other hand, countries like the United Kingdom and Australia invested less in robots but saw faster declines in their manufacturing sectors. 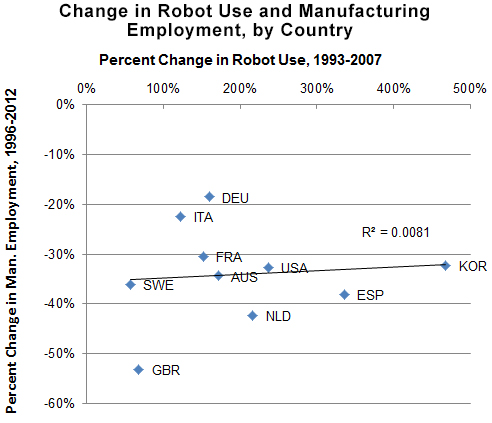 Source: Graetz and Michaels and authors’ analysis of Bureau of Labor Statistics data.

Another way to look at this is to ask: How many jobs would each economy have lost if the decline in manufacturing employment was proportional to the increase in robots?

By this metric the United States should have lost one-third more manufacturing jobs than it actually did and Germany should have lost 50 percent more, while the United Kingdom lost five times more than it should have. The lesson is that the net impacts of automation on employment in manufacturing are not simple, and at least during the time frame studied here they cannot be said to have caused job losses. 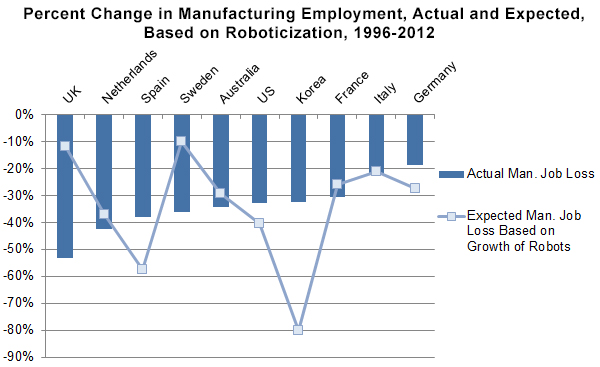 Source: Graetz and Michaels and authors’ analysis of Bureau of Labor Statistics data.

Industrial robots are a disruptive technology, and as disruptive technologies take hold some workers benefit while others are hurt. But to suggest, as some in popular media have, that the use of robots is a causal factor in the decline of American manufacturing employment is factually wrong and misses a broader point. As the productivity figures suggest, robots are increasingly essential to the competitiveness of a country’s manufacturing sector. The fact that countries like Germany, Sweden, and Korea are deploying automation technology at a much faster rate than the United States points to serious competitive challenges—and further debate about the use and impacts of automation.

The most important election you never heard of