Over the last year, employers have added jobs at rates not seen since the 1990s, filling an average of 266,000 positions per month and causing unemployment to fall to its lowest level since 2008. While concerns persist about stagnant wages and workforce participation, there may be good news that, among the sectors powering this job growth—including advanced industries—several infrastructure-related industries are hiring at the most rapid clip.

From water and energy to transportation and logistics, infrastructure jobs often involve activities that extend far beyond short-term construction projects, offering competitive wages in positions with high replacement needs and low barriers to entry. New hires in this sector, as such, represent a critical area for future job growth.

The most recent U.S. job openings report illustrates these patterns quite well, particularly in transportation, warehousing, and utilities. Since 2010, for instance, the annual level of new hires in this industry has expanded from 1.6 million to 2.2 million, or 36.3 percent, almost double the national increase (20.3 percent) over the same span. This growth in hiring also exceeded several other industries, such as finance (14.6 percent), educational services (11.6 percent), and health care (18.8 percent), while falling just short of the mining sector (44.3 percent), which benefited from the shale gas boom. 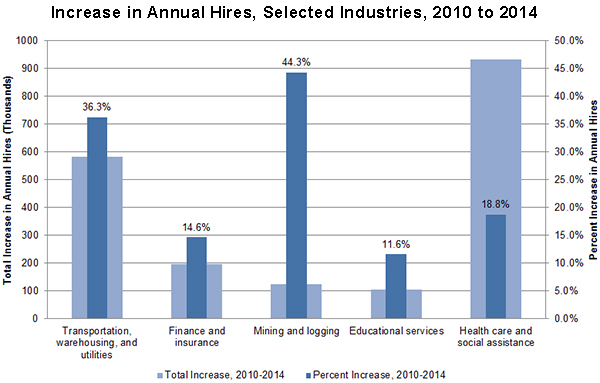 At the same time, while many of these jobs experience seasonal fluctutations—especially in trucking, where hiring typically accelerates before the holiday season—transportation-warehousing-utilities has seen a consistent climb in job openings since the end of the recession. In January 2010, there were only 44,000 openings in the sector, but five years later this number had jumped to 205,000. Openings jumped 23 percent over the past year alone. Meanwhile, the number of separations—which includes workers who quit as well as those who are laid off—has continued to surge, signaling the high turnover and urgent need for talent in these jobs while placing upward pressure on wages. 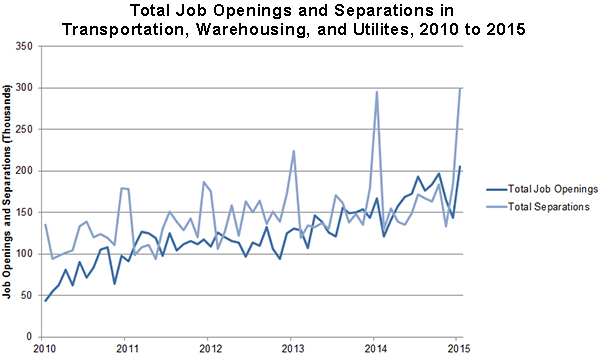 These numbers indicate how infrastructure’s ability to generate more jobs remains hugely important for millions of workers and employers across the country. They also reveal how infrastructure should represent a key priority for state and local policymakers in the months ahead, even as Congress stalls on investments that are instrumental to a sustained recovery.