People often wonder why the American electorate is whiter than the general population in light of the huge diversity explosion underway. The basis for this “voter representation gap”— largest for Hispanic and Asian new minorities—is multifaceted.

One reason involves simple demography. Substantial shares of both the Hispanic and Asian populations are under age 18 and too young to vote. Secondly, even among those who are in the United States legally, substantial shares are not citizens, a consequence of their recent arrival status or a delay or unwillingness to become naturalized.

Whites, in contrast are an older population with fewer non-voting age members and far more likely to be citizens. Blacks lie somewhere in-between. 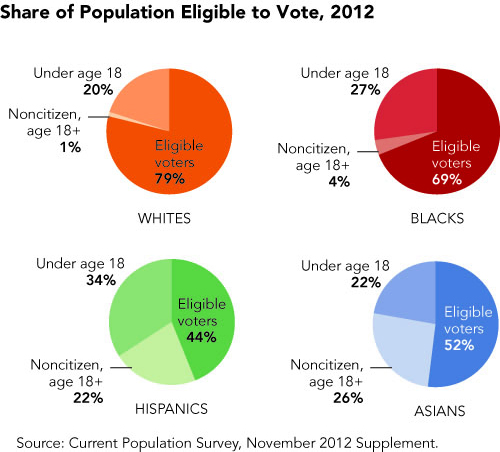 For the 2012 presidential election half or fewer of Asians and Hispanics in the United States were eligible to vote, compared with nearly four-fifths of the white population and more than three-quarters of blacks.

The gap is further widened by typically lower rates of turnout on Election Day for Hispanics and Asians than for blacks, making whites more highly represented in the voter population (74 percent in 2012) than in the total population (63 percent).

The gap will eventually shrink as more Hispanic and Asian adults become naturalized citizens as their populations become established and as more of their younger populations reach voting age.