Nationally, most commuters are still revving up their cars to get to work every morning, but how does the picture look across different age groups?

Based on the latest Census data from the 2013 American Community Survey, changes are underway for younger and older commuters alike, especially in the country’s largest metropolitan areas.* By and large, millennials and Generation X are leading the charge toward a range of alternate modes, including public transportation and walking, while baby boomers continue to use their cars at high levels.

Indeed, workers ages 16 to 24—the youngest working millennials—are commuting the least by car compared to all other age groups (82.4 percent), a share that has fallen by nearly 1.3 percentage points in large metro areas since 2007 alone. It’s also more than just a recent blip; that same age group drove at an 86.1 percent clip over three decades ago according to a 1983 survey.

Young millennials also represent the commuters who most frequently take public transportation (5.8 percent) and walk to work (6.6). They’re not only ditching the car in traditional multimodal hubs like San Francisco, but in several smaller metros as well. For example, Tucson ranked first nationally in its transit growth among these workers, seeing their share rise 5.5 percentage points since 2007. Meanwhile, more young workers are walking in other university-centric metros like Syracuse (+3.6), New Haven (+2.4) and Austin (+1.7).

Yet, driving dips aren’t simply limited to younger millennials; older millennials and Generation X commuters are shifting away from private vehicles in nearly equal numbers. Workers ages 25 to 54 saw their driving rate fall by 0.9 percentage points between 2007 and 2013. That drop equates to roughly 750,000 drivers switching to other modes, which might help explain the stalling number of miles driven across the country. In addition, these drops are quite widespread. About two-thirds of the country’s largest metros saw their Generation X cohort drive less, including Portland, Ore. (-3.5 percentage points), Honolulu (-3.3) and Philadelphia (-2.9). 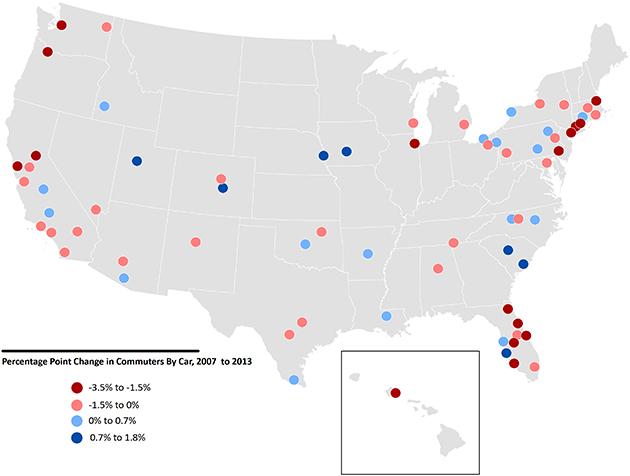 Unlike these two age groups, baby boomers aged 55 and up are the only commuters to consistently drive more since 2007. As the nation’s older population continues to surge in years to come, however, these commuters will face a host of challenges driving  and will likely need to consider more transportation options.

In many metro areas, the share of older commuters working at home (6.4 percent) appears to be gaining momentum in this respect, exceeding both young workers (2.4) and prime-age workers (4.1). Bridgeport and Denver are among the highest-ranking metros, with more than 10 percent of their older commuters working at home in 2013, followed by San Diego, Phoenix and Raleigh. Outside driving and working home, though, just 4 percent of older commuters opted for public transportation and 2.2 percent walked to work during the same year, lower than any other age group and consistent with ongoing trends.

These commuting changes taking place across different age groups, while revealing, leave us with many more questions than answers. Will millennials continue to drive less as they advance their careers and grow their families? For Generation X, will denser development patterns and school improvements in urban cores lead to continued driving declines?

Metropolitan leaders will have to closely monitor their region’s commuting demands to begin answering these questions in years to come.

*: Due to changing metropolitan definitions and limited county-level data, we can only compare 69 of the 100 largest metropolitan areas between 2007 and 2013.

Yangyang Cheng, Ryan Hass, and Jude Blanchette
Monday, May 23, 2022
How We Rise