Nearly a week after the death of 18 year-old Michael Brown in Ferguson, Mo., protests continue in the 21,000-person suburban community on St. Louis’ north side and around the nation.

Amid the social media and news coverage of the community’s response to the police shooting of the unarmed teenager, a picture of Ferguson and its history has emerged.

The New York Times and others have described the deep-seated racial tensions and inequalities that have long plagued the St. Louis region, as well as the dramatic demographic transformation of Ferguson from a largely white suburban enclave (it was 85 percent white as recently as 1980) to a predominantly black community (it was 67 percent black by 2008-2012).

But Ferguson has also been home to dramatic economic changes in recent years. The city’s unemployment rate rose from roughly 7 percent in 2000 to over 13 percent in 2010-12. For those residents who were employed, inflation-adjusted average earnings fell by one-third. The number of households using federal Housing Choice Vouchers climbed from roughly 300 in 2000 to more than 800 by the end of the decade.

Amid these changes, poverty skyrocketed. Between 2000 and 2010-2012, Ferguson’s poor population doubled. By the end of that period, roughly one in four residents lived below the federal poverty line ($23,492 for a family of four in 2012), and 44 percent fell below twice that level.

These changes affected neighborhoods throughout Ferguson. At the start of the 2000s, the five census tracts that fall within Ferguson’s border registered poverty rates ranging between 4 and 16 percent. However, by 2008-2012 almost all of Ferguson’s neighborhoods had poverty rates at or above the 20 percent threshold at which the negative effects of concentrated poverty begin to emerge. (One Ferguson tract had a poverty rate of 13.1 percent in 2008-2012, while the remaining tracts fell between 19.8 and 33.3 percent.) 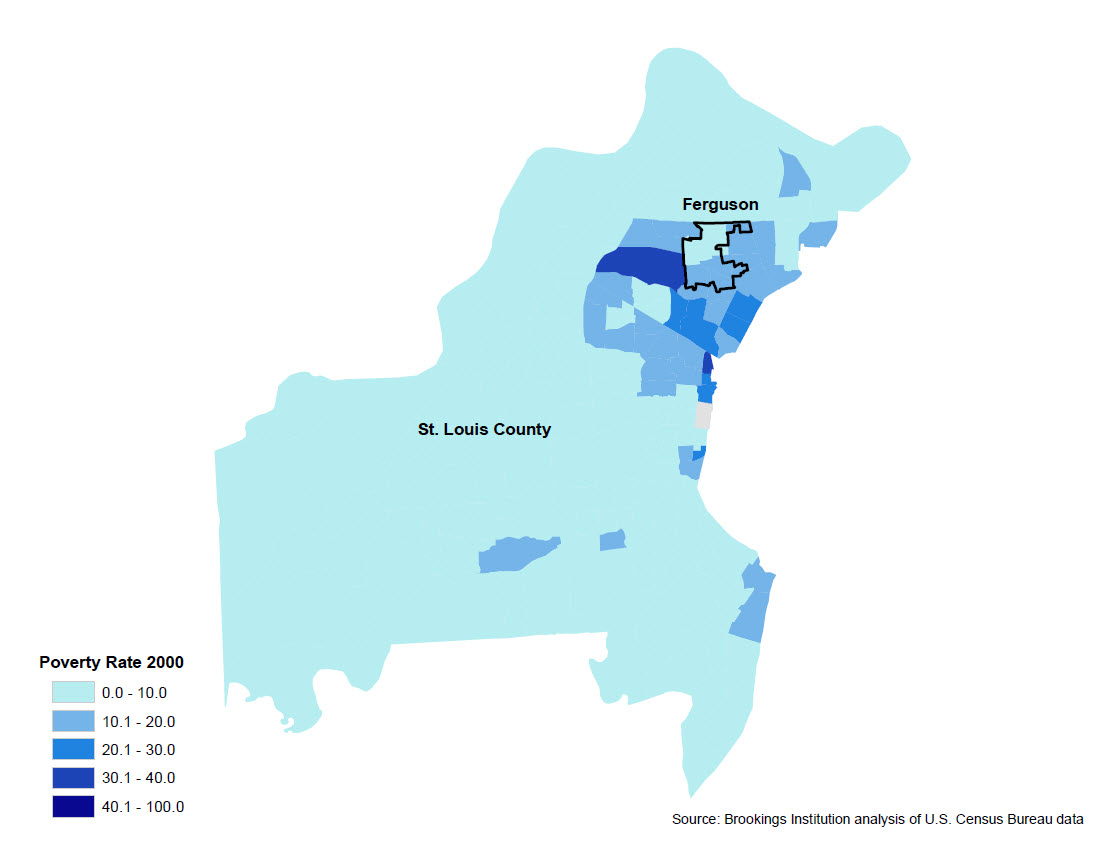 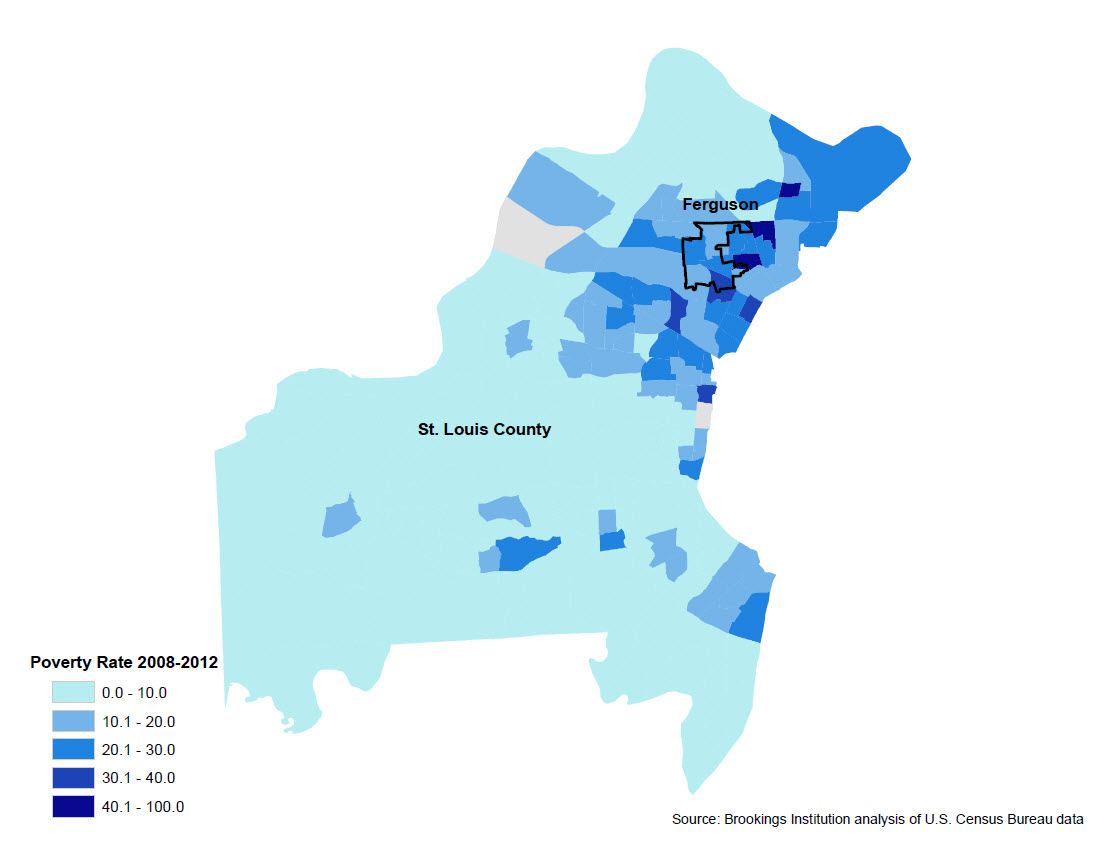 As dramatic as the growth in economic disadvantage has been in this community, Ferguson is not alone.

Within the nation’s 100 largest metro areas, the number of suburban neighborhoods where more than 20 percent of residents live below the federal poverty line more than doubled between 2000 and 2008-2012. Almost every major metro area saw suburban poverty not only grow during the 2000s but also become more concentrated in high-poverty neighborhoods. By 2008-2012, 38 percent of poor residents in the suburbs lived in neighborhoods with poverty rates of 20 percent or higher. For poor black residents in those communities, the figure was 53 percent.

Like Ferguson, many of these changing suburban communities are home to out-of-step power structures, where the leadership class, including the police force, does not reflect the rapid demographic changes that have reshaped these places.

Suburban areas with growing poverty are also frequently characterized by many small, fragmented municipalities; Ferguson is just one of 91 jurisdictions in St. Louis County. This often translates into inadequate resources and capacity to respond to growing needs and can complicate efforts to connect residents with economic opportunities that offer a path out of poverty.

And as concentrated poverty climbs in communities like Ferguson, they find themselves especially ill-equipped to deal with impacts such as poorer education and health outcomes, and higher crime rates. In an article for Salon, Brittney Cooper writes about the outpouring of anger from the community, “Violence is the effect, not the cause of the concentrated poverty that locks that many poor people up together with no conceivable way out and no productive way to channel their rage at having an existence that is adjacent to the American dream.”

None of this means that there are 1,000 Fergusons-in-waiting, but it should underscore the fact that there are a growing number of communities across the country facing similar, if quieter, deep challenges every day.

A previous version of this post misstated the Ferguson unemployment rate in 2000. It has since been corrected.

More on U.S. States and Territories