One surprising passage in Tuesday night’s State of the Union speech was President Obama’s sudden embrace of government restructuring. About 43 minutes into the speech, the president placed the federal bureaucracy’s institutional anachronisms on center stage, and declared the issue not just a matter of efficiency but of national competitiveness. Obama said he would submit a proposal to “merge, consolidate, and reorganize the federal government in a way that best serves the goal of a more competitive America” sometime in the next few months.

What was President Obama getting at here and why is it important? Given our work analyzing the many structural and institutional ills of America’s excessively fragmented and obsolescent government structures since our multi-year Blueprint for Metropolitan Prosperity project, we have been noting pretty consistently that Washington’s structures, policies, and rules today remain heavily “stove-piped”—narrowly defined, poorly coordinated, and in general ill-suited to supporting creative problem-solving, whether metropolitan or otherwise.

Along these lines, Bruce Katz and I observed in our 2008 report “MetroPolicy” that the dizzying pace, level of connectedness, and rising expectations of the current era require a move toward policies and approaches that empower synergistic, integrated problem-solving.

To be sure, we arrived at this conclusion by dint of our particular study of how federal institutions fail to serve metropolitan economies. At any rate, though, we called out some pretty glaring examples of fragmented, old-style federal organization that we would submit make great candidates for Obama’s streamlining program. We noted that nine federal departments and five independent agencies carry out 180 disparate federal economic development programs. 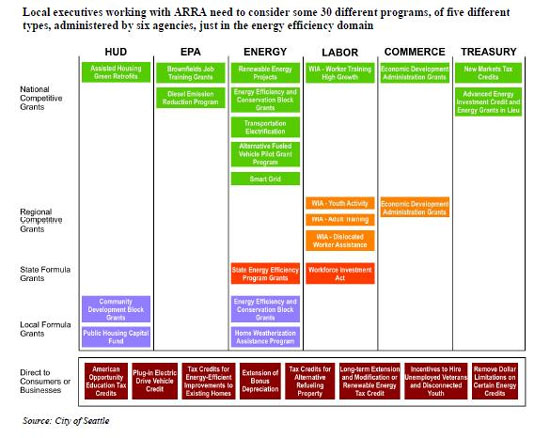 We described how innovation investments occur in fragmented silos isolated from the market and poorly linked to regional industry clusters. And in a report on the ways the Recovery Act reinforced the flaws of government as usual, we noticed that 30 different programs, of five different types, administered by six different agencies, were relevant to energy efficiency alone.

In short, we like this new front in the reform wars that the president has opened, and would only note that with dozens of interagency efforts laboriously underway aimed at joining up the parts (see, for example, the Task Force on Regional Innovation Clusters effort or the E-RIC energy innovation hub or Sustainable Communities), this work is not for the faint of heart, as a good Washington Post story this morning notes. Here’s hoping President Obama is truly ready to mount a major campaign to streamline stove-piped Washington and reward problem-solving that crosses disciplines and “joins up” solutions. It will require all of his greatest powers of persuasion and insistence.