Your medical records do not belong to you, they are owned by your doctor. If you manage to get your hands on your own medical records, it is due to the privacy rule of 2000 which requires medical providers to let patients have a copy of their records at a “reasonable cost.” Although the rule does not mention a specific fee, it asserts that it should not be a means to “impede the ability of patients to copy their medical records” but rather to enable medical providers to “recoup their reasonable costs for copying of protected health information.”

Research shows that when patients are provided with access to their medical records, they become more engaged in their treatment and experience better care outcomes. Steven Keating’s discovery of a brain tumor through meticulous collection of his own patient data is an example of how patient engagement in medical treatments can improve care outcomes.

The current lack of interoperability among different health IT systems intensifies the importance of patients’ access to their medical records. Patients can act as exchange mediums of medical information and physically bridge the digital gap of interoperability between different EHR systems. If patients have their medical data, they can share it with other medical providers. Reviewing the records provided by patients will enable medical providers to avoid redundant medical tests and procedures while also making better decisions in less time. This will likely save patients’ time, money, and sometimes lives.

Patients’ access to medical data may not help medical providers

Allowing patients to have a copy of their medical records is not necessarily beneficial for medical providers. Just like restaurants that compete over patrons, medical providers compete with each other for patients. Hospitals and physicians do not like to lose their customers to other medical providers. Restraining access to medical records is a very effective way to retain patients and inhibit them from migrating to other providers. According to the estimates by a group of economists at Stanford University, in the states where it is easier and cheaper for patients to obtain their medical records, the proportion of patients who switch their primary care physicians and specialists increases by 11 percent and 13 percent respectively.

Many states have passed regulations that define a structure for the “reasonable cost” of copying patient records. The caps that states place on reasonable costs vary widely. Most states allow for a per page copying fee that may decrease if the records request includes large numbers of copies. Some states allow the caps to rise along with inflation. To examine the relative cost of record copying we calculated the maximum cost for copying 75 pages of records in different states. Georgia ($101), Pennsylvania ($95), Indiana ($93), and Mississippi ($90) have some of the highest caps. While Tennessee ($29), Wisconsin ($23), and California ($19) have the lowest caps.

Interestingly, despite the fact that 94 percent of the hospitals in the United States have now adopted a certified EHR system, many state regulations are still focused on the paper records and propose cost structures that do not apply to electronic records. Although the costs for reproducing digital records are effectively zero, many states still use the same regulatory model – which is based on the number of copied pages – for paper and digital records.

Patients are not aware of potential value of their medical data

We used Google Consumer Surveys to ask a simple question from a nationally representative sample of American Internet users: “How much are you willing to pay to have all of your medical records collected and securely delivered to you electronically?” As shown in the chart below, 68 percent of the respondents are not willing to pay anything for having access to their medical data. According to our survey of a larger sample (360 respondents), the 95 percent confidence interval of the average valuation of the medical data ranges between $5 and $7.2. 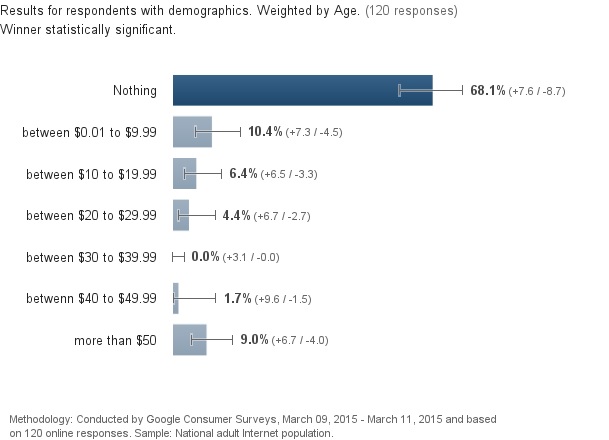 Although creating an electronic portal in which patients can have access to their records is a part of the criteria for the stage 2 of the meaningful use incentives, the large majority of medical providers still have not met this standard. Even the minority of patients who could potentially access their records via portals may not be fully informed about the existence of such technologies. Patient advocacy groups should work to make patients aware of the value of having access to their own data. More importantly, if patients are adequately informed about the potential benefits of their medical data, they are more likely to demand a copy of their medical records from their providers. When many patients ask providers to copy records it becomes much more difficult for them to refuse.

The intention behind suggesting a copying fee in the privacy rule of 2000 was to ensure that medical providers are adequately reimbursed for the additional efforts that they have to make in order to copy medical records at the patients’ request. Although the EHRs are very expensive, one should note that the majority of medical providers used HITECH incentives to adopt such software. Given that EHRs set the costs of re-producing an additional copy of medical data for the patients at effectively zero, state regulations should undergo a major revision and require the medical providers to let patients have their medical data for free.

Why the World Anti-doping Agency should revisit its cannabis ban

What are Build America Bonds or direct-pay municipal bonds?

Tunisia, democracy, and the return of American hypocrisy