The information overflow that occurs in the wake of a disaster can paralyze humanitarian response efforts. Computers, mobile phones, social media, mainstream news, earth-based sensors, humanitarian drones, and orbiting satellites generate vast volumes of data during major disasters. Making sense of this flash flood of information, or Big Data is proving a perplexing challenge for traditional humanitarian organizations. Aid groups are more adept at dealing with information scarcity than overflow. To address this problem many organizations are turning to Digital Humanitarians for help.

Digital Humanitarians are volunteers and professionals from all over the world and all walks of life. They share a desire to make a difference, and they do by rapidly mobilizing online in collaboration with international humanitarian organizations. In near real-time, they can process Big Data to support relief efforts worldwide. They craft and leverage ingenious crowdsourcing solutions with trail-blazing insights from artificial intelligence. My new book, Digital Humanitarians, charts the sudden and spectacular rise of these “Digital Jedis” by sharing their remarkable, real-life stories, highlighting how their humanity coupled with innovative Big Data solutions has changed how humanitarians will respond to disasters.

The first “battle” between Digital Jedis and Big Data began on January 12, 2010, following the devastating earthquake that struck Haiti. Within hours, Digital Jedis mobilized online, launching a Crisis Map pinpointing the damage and resulting needs across the Haitian capital of Port-au-Prince. They manually monitored social media and mainstream news around the clock, searching for relevant and map-able reports from Haiti. Within a week, thousands of digital volunteers from dozens of countries around the world had come together online to map the latest reports from Port-au-Prince; the majority of these Digital Jedis were Haitians living abroad. Meanwhile, other volunteers crowdsourced the analysis of satellite imagery to create the most detailed street map of Haiti ever made. Ten days into these digital humanitarian efforts, the head of FEMA, Craig Fugate, referred to these crisis maps as the most detailed and useful tools available to the humanitarian community. Weeks later, the US Marine Corps emailed these Digital Jedis to thank them for their efforts, noting that their maps had helped them save hundreds of lives. 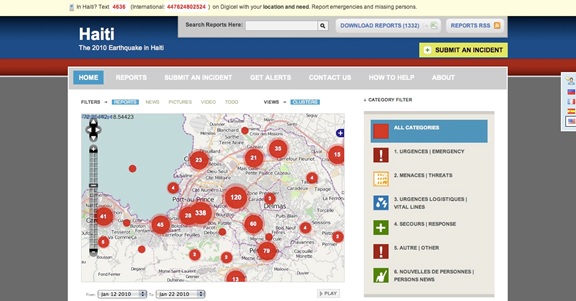 This first battle with Big Data taught Digital Jedis some important lessons. Perhaps the most obvious one was this: crowdsourcing alone would not win the Big Data battles of the future. More than 20 million tweets were generated during Hurricane Sandy in 2012, for example. Manually reading all these tweets—to look for the most important ones—would take one person about 60,000 hours or just over 6 years. So what Digital Jedis needed were next generation humanitarian technologies powered by crowdsourcing and artificial intelligence. Artificial Intelligence for Disaster Response (AIDR) uses crowdsourcing to train algorithms that automatically identify relevant tweets during disasters. Digital Jedis also use the MicroMappers platform to combine crowdsourcing with artificial intelligence to automatically identify relevant features in pictures, satellite imagery, and even aerial imagery. While still experimental, this new technology should go a long way to support Digital Jedis during future humanitarian crises.

While AIDR, MicroMappers, Verily, and TweetCred seem promising—I’m obviously biased since my team and I at QCRI are the ones developing these free and open source solutions—what is far more important are the scientific methodologies driving these platforms—namely human computing (crowdsourcing) and machine learning (artificial intelligence). This is one of the more important messages in my new book: focus on the science. Perhaps the most important message of the book is that people would not use or develop these next generation humanitarian technologies if they lacked a desire to help others in need. To this end, the Digital Humanitarians story is just as much a story about humanity as it is about technology.

Patrick Meier is an internationally recognized thought-leader on humanitarian technology and innovation. His new book “Digital Humanitarians” has already been endorsed by Harvard, MIT, Stanford, Oxford, UN, World Bank and the Red Cross. He currently directs QCRI’s Social Innovation Program where he develops “Next Generation Humanitarian Technologies” in partnership with international humanitarian organizations. Patrick has a PhD from The Fletcher School, Pre-Doc from Stanford and an MA from Columbia. His work has appeared in the New York Times, Washington Post, CNN, BBC, Forbes, Times, Wired and Mashable. Patrick’s influential blog iRevolutions has received over 1.5 million hits.