Since 2009 the federal government started the process of replacing local computers with cloud platforms. A recent report from the Congressional Research Service (CRS) provides an interesting view into the progress of these investments. It reveals the benefits that public agencies gain when using cloud services and the barriers they face when making the transition.

Government Investments in the Cloud

Determining the exact size of government cloud computing expenditures is difficult. Government spending on IT has increased every year from 2001 to 2013 when it reached a peak of $81 billion. In the three subsequent years it has decreased. Cloud computing expenditures likely represent a tiny fraction of that total. Market research firms have estimated that the federal government spends between $1.4 billion and $7 billion on cloud computers annually. 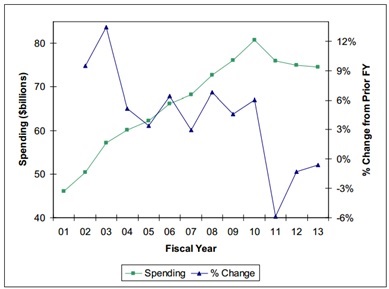 Challenges for Migrating to the Cloud

The federal government has encountered several barriers in its plan to shift more functions to cloud platforms:

The Future of the Government Cloud

An analysis of the costs and benefits of cloud migration uncover a few specific barriers that the federal government must overcome to earn the full value from new technologies. First, lawmakers must be willing to spend more now to save money later. Cloud systems are cheaper to run than local administered servers but the initial transition costs are high. Current funding levels, which are trending down, are too low to finance such a change. Privacy and security are also major challenges. Government servers host troves of data that Americans expect to remain private. Converting these systems to the cloud will require the government’s full confidence that cloud systems are at least as secure. New legislation is likely necessary to achieve the complimentary goals of privacy and security.