Disclosure of the financial relationships between the medical industry and health care providers is a very important step toward transparency. Patients heavily rely on the recommendations of their doctors to make any kind of decision regarding their health and thus should have full awareness of payments between their doctors and the medical industry. Patients have a right to be informed about possible conflicts of interests.

A not so well-known provision of the Affordable Care Act is the Sunshine Act. The purpose of this act is to increase the transparency in the health care market by requiring doctors, hospitals, pharmaceutical companies, and medical device manufacturers to disclose their financial relationships. Mandated by the Sunshine Act, on September 30th, Centers for Medicare and Medicaid Services (CMS) publicly released the first set of data, under the Open Payments title. This data includes $3.5 billion paid to over half a million doctors and teaching hospitals in the last five months of 2013.

A subset of Open Payments data that is individually identifiable  includes two categories of payments. The first category are the payments that are made for other reasons such as travel reimbursement, royalties, speaking and consulting fees and the second are payments which are made as research grants. These datasets together include more than 2.3 million financial transactions which amount to a total of more than $825 million.

Total Payments by Manufacturers of Drugs, Medical Devices, and Biologicals

Teaching hospitals and physicians together received $669,561,563 in general payments from 949 different medical manufacturers. Interestingly, close to 70 percent ($460,369,403) of this amount was paid to individual physicians and the rest was paid to teaching hospitals. More than half of the total general payments were made by only 20 companies led by Genentech, which paid $130,065,012 in general grants to various hospitals and doctors and in particular, City of Hope National Medical Center.

Two hundred and ninety-four manufacturers awarded 23,225 research grants to teaching hospitals and physicians. The total value of these grants was $155,815,828. About 70 percent ($107,969,961) of these grants were awarded to teaching hospitals and the rest were awarded to physicians. The top 20 manufacturers contributed more than 75 percent of the total value of these grants. By awarding $17,973,563 in research grants Bristol-Myers Squibb, leads the pack.

The following chart breaks down the payments of the top 20 most generous manufacturers of drugs, medical devices and biologicals to teaching hospitals and individual physicians. 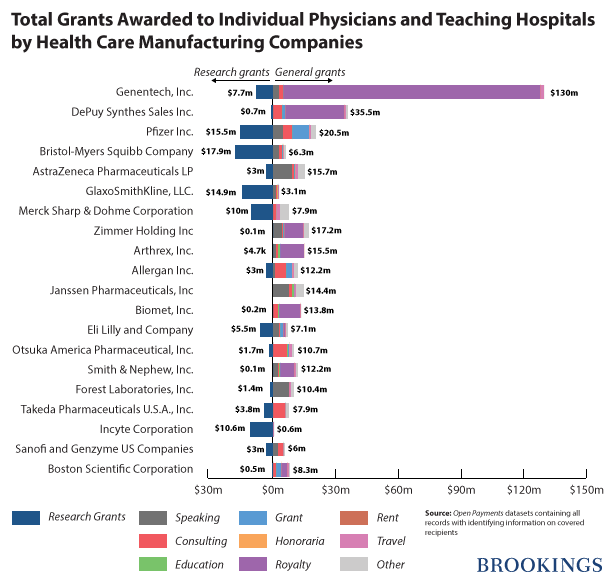 Not surprisingly, the release of the payments data was not immune from criticism. The harshest ones were from the American Medical Association (AMA). In particular, the AMA cited “inadequate opportunity for physician review” and “inaccuracy of the data” as the main problems with the release of open payments data. Moreover, AMA was so concerned about the “misinterpretation” of the data that it released an official “Guide for Media Reporting” in which it “strongly encourage[s] members of the media to… help the public understand the important role that appropriate relationships between physicians and industry has in advancing the practice of medicine.”

It’s critical to interpret financial transactions between different medical providers in context. Obviously, accurate and complete data is preferable to inaccurate and incomplete data. However, it’s not possible to avoid any of these problems by withholding data any longer.

Misinterpretation of the Open Payments data is an unfortunate yet inevitable problem. Given the volume and inherent complexity of this data, patients and media will have a steep learning curve ahead of them before they fully understand the nuances of the open payments. The AMA argues correctly that medical providers are best suited to educate patients and media representatives about this data. The Open Payments data may create questions but the lack of response to these questions will result in misinterpretation.

The AMA claims that the technical problems with the website inhibited physicians to verify this information in the 45-day window provided by CMS. This may be true, but it’s worth noting that a subset of hospitals and physicians accounted for 75 percent of the total payments. The window (which was then extended) may not have given all medical providers enough time to adequately check this data and inform CMS about possible errors, but this still allowed enough time to audit those limited instances of doctors and hospitals that were paid the largest sums of money. Moreover, CMS has already adopted a conservative approach and has removed data for about one third of the payments due to possible errors. Those providers who received eye-popping sums of money from the pharmaceutical companies and medical device manufacturers have already had abundant opportunities to verify this information and possibly provide the context to media outlets. 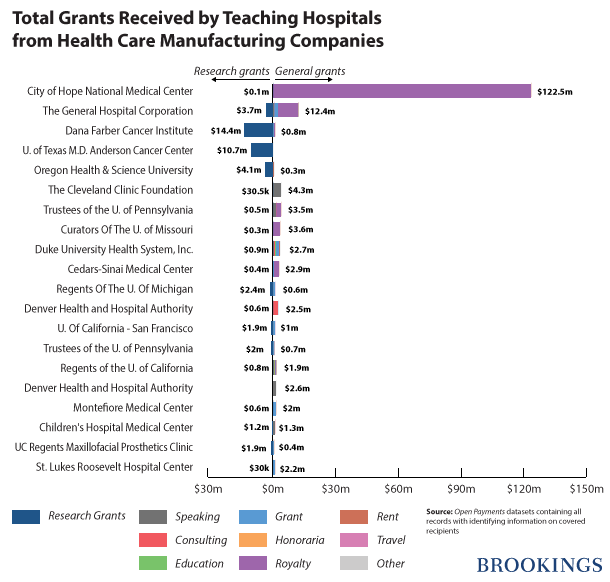 Nearly 466,000 physicians received $460,369,403 in general payments. About 10 percent ($42,555,940) of this amount was paid to the top 20 doctors, mainly as royalties and licenses. At the top of the list is Dr. Stephen S Burkhart, orthopedic surgeon from San Antonio who received $7,352,788 in royalties from Arthrex, a manufacturer of orthopedic surgical supplies. 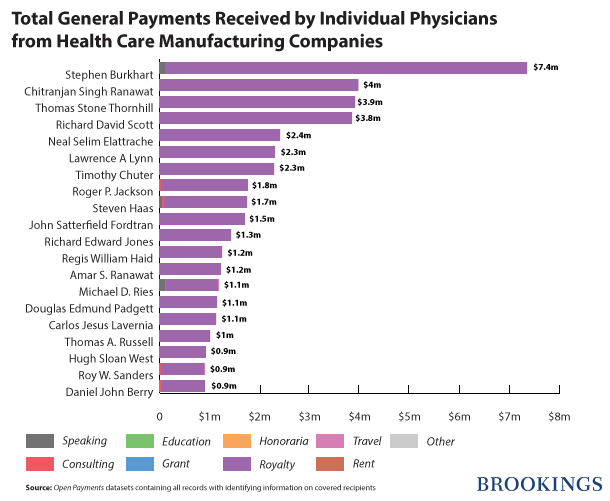 The 3,744 doctors in the database received $47,845,867 in research grants. The top 10 percent of doctors received about 71 percent ($33,917,206) of these grants. Dr. Stuart S. Winter, the pediatric hematologist/oncologist from the University of New Mexico, received $2,886,844 from GlaxoSmithKline, for conducting two research projects on Arranon, a brand name drug for treating specific types of cancer. 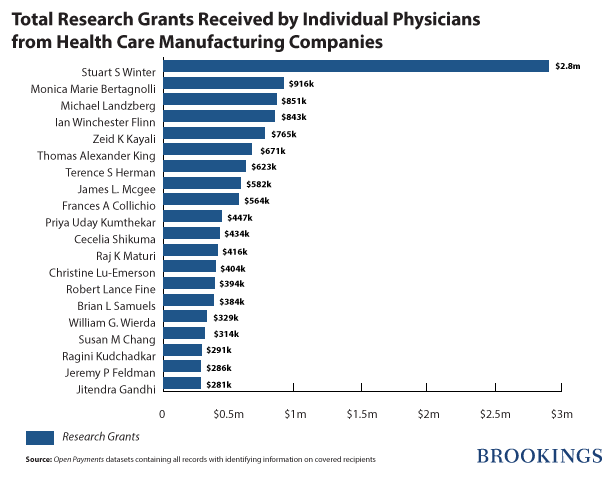 This provision of the ACA offers valuable insight into data that was not previously shared with the American public, which is an important step toward broader transparency into the U.S. health care system.

Motivated by abortion, women could determine the outcome in Tuesday’s midterm elections