The meaning of “Arab Spring,” according to Professor Ibrahim N. Abusharif of Northwestern University in Qatar, has developed over the last three years to have a positive connotation that Western media has generally accepted as the term to define the recent major events in the region. Quite remarkably, as he notes, the descriptor flourished rapidly in global media coverage of the region’s initial revolutions, and has endured the counter-revolutions, coups, assassinations and fierce civil strife since the original spark.

The digital aspect of the Arab Spring has received far less media attention, but may be equally worthy of recognition due to their long-tail implications. These are the rapid developments in the diffusion of digital communication technologies and services that virtually every country in the Arab Middle East is experiencing, regardless of how much political turmoil and instability is at play in any particular locale.

The data conveys the picture with just a few quick points of reference: 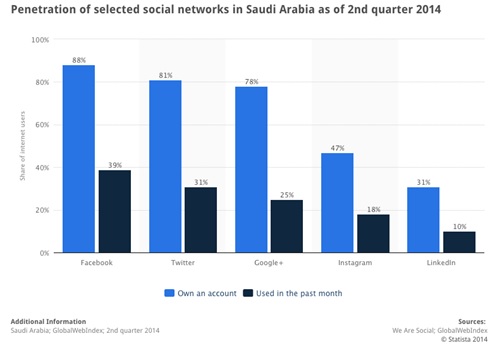 Looking ahead, by next year there will be over 400 million Internet users in the Arab world, exceeding the populations of Europe or the United States. With a growing youth demographic, virtually all of whom utilize digital devices and social media on a regular basis, there will be ample opportunities to interact with this enormous base, exposing the region to a wider source of news and information that is not under centralized government control. There will continue to be content restrictions, of course, largely driven by adherence to various strains of Islamic faith and local culture. But the ability to filter out news and information coming in from outside the region will face more formidable constraints as residents of the region become even more firmly enmeshed as digital citizens of a much larger geographic footprint, particularly one with a common language other than English.

This may help foment even more discord as rival factions begin to capitalize on digital trends to amass more power. Alternatively, it may help create more durable people-to-people bridges within countries and throughout the region that help counteract authoritarian regimes. In either case, those engaged on the foreign policy front should continue tracking closely the digital diffusion numbers. Clearly, the success or failure of the colloquial Arab Spring will be strongly influenced—and perhaps determined—by another phenomenon: the Arab Digital Spring.