Parents are concerned that teenagers are spending too much time in front of computers or televisions. Teens aged 12-15 are recommended to limit the time they spend in front of computers or televisions to two hours or less per day. This time limit includes watching TV, using a computer, and playing video games. In excess, sedentary screen time has been linked to elevated blood pressure, elevated serum cholesterol, and obesity. Without intervention these behaviors and symptoms can escalate as youths become adults. The National Center for Health Statistics (NCHS) recently released a data brief on the key findings from the 2012 National Health and Nutrition Examination Survey (NHANES) and the NHANES National Youth Fitness Survey.

Daily TV Watching and Computer Use

Ninety-eight and a half percent of teenagers aged 12-15 reported watching TV daily. And 91.1 percent reported using the computer daily in the past 30 days. The majority of youths stayed within the recommended two hours of TV and computer screen time per day, but 35 percent of youths watched more than two hours of TV daily. About a third of survey respondents said they had an hour of screen time or less. 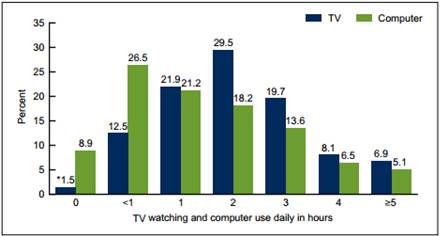 The NHANES and the NHANES National Youth Fitness Survey found that across the board, teenagers who spent two hours or less in front of a screen primarily used a computer. White and Hispanic teens reported watching 2 hours or less of TV, as well as watched daily at higher rates than black teens. White and Hispanic teenagers used computers and watched TV at roughly the same rates.

Percentage of youth aged 12–15 reporting 2 hours or less of TV viewing and computer use daily, by race and Hispanic origin: United States, 2012 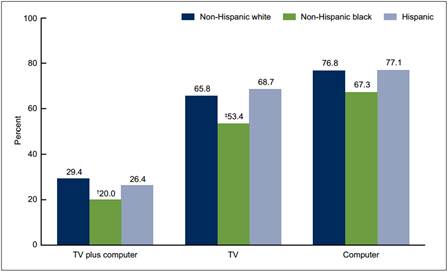 Daily Screen Time of 2 Hours or Less by Weight Status

Obese and overweight teenagers were less likely to report that they met the recommended two hours of screen time. Seventeen percent of obese teens did not meet the two hour target for TV watching when compared with teens who were underweight or at a normal weight. Teens of all survey categories of weight used computers at roughly the same rates.

Percentage of youth aged 12–15 reporting 2 hours or less of TV viewing and computer use daily, by weight status: United States, 2012 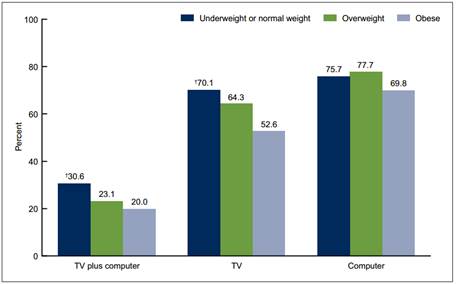 The NCHS data brief shows that the majority of U.S. youth aged 12-15 watches television or uses the computer daily. Screen time varies between race and Hispanic origin as well as weight status. The proportion of non-Hispanic black youth reporting 2 hours or less of TV watched daily was smaller compared with non-Hispanic white and Hispanic youth. As weight status increased, the proportion of youth who reported watching 2 hours or less of TV daily decreased. Although most teenagers aged 12-15 meet the recommended 2 hour maximum screen time, the percentage of those who exceed it is too high. The symptoms linked to excessive screen time are serious, and the habits acquired at a young age could affect the health of U.S. teenagers as they transition into adulthood.

TechTank Podcast Episode 48: How do we center equity in the future of telehealth?

Ways to address the opioid crisis