Driverless cars are coming sooner than you might think to a highway near you. California, Florida, and Michigan already allow driverless cars on the road for testing purposes and other states are considering more ambitious laws. But many are conflicted about this new advancement for the automobile. A new survey from Brandon Schoettle and Michael Sivak at the University of Michigan polled drivers in the United States, United Kingdom, and Australia on their opinions about driverless cars.

Americans were optimistic about the potential benefits of traveling in a driverless car. The survey found people believed automated cars would reduce the number and severity of crashes, improve response times from emergency workers, reduce traffic congestion, lower vehicle emissions, and decrease auto insurance premiums. Despite the belief that driverless cars have numerous advantages, many still reported trepidation about the new technology. About two thirds of Americans were moderately concerned or very concerned about driving or riding in a vehicle with self-driving technology.

“How likely do you think it is that the following benefits will occur when using self-driving vehicles?” 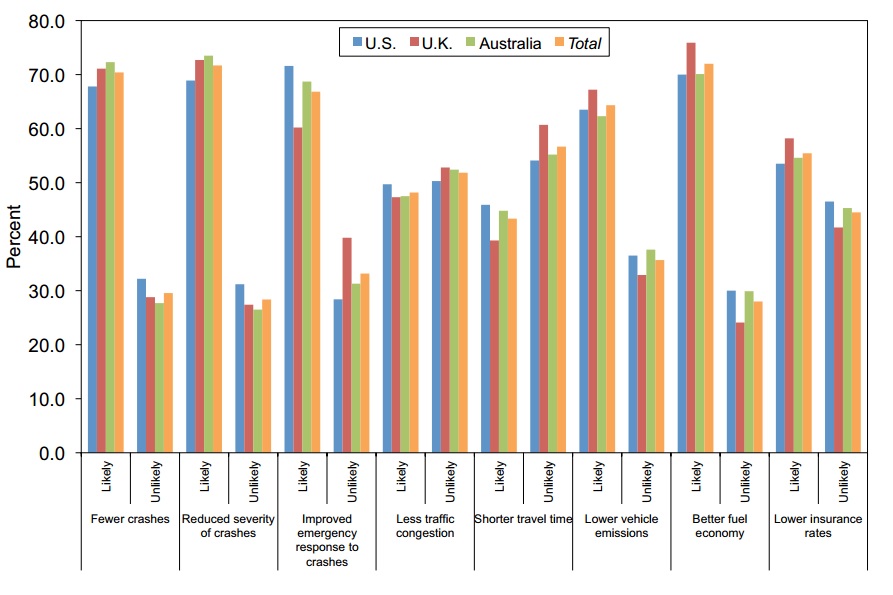 Why Are Americans Afraid to Let Go of the Wheel?

American drivers have concerns about legal and liability issues. 77 percent of American respondents were moderately concerned or very concerned about legal liability for drivers. In a recent paper, John Villasenor offers several policies to address these thorny legal issues:


Automakers have slowly incorporated automatic features into cars for many years. Drivers rely on anti-lock brakes, automatic gear shifting, and cruise control every day. This process will continue as industry leaders add driverless features into current models. Policymakers will update law to address issues presented by these new technologies and savvy American consumers will embrace these changes.

We can’t beat the climate crisis without rethinking land use