How Have Ads Impacted the ACA Enrollment in Different States?

I used the ACA enrollment data released by the Department of Health and Human Services, to calculate the ACA enrollment ratio as the number of enrollees divided by the total number of people who could have potentially enrolled in the ACA. This number includes the ones who were either uninsured or had purchased private insurance. Although more than 8 million Americans have signed-up to purchase health insurance through the marketplaces during the first open enrollment period, this nationwide number masks tremendous variation in participation across states. While the enrollment percentage in Minnesota is slightly above five percent, in Vermont, close to fifty percent of all eligible individuals have signed up for the ACA. 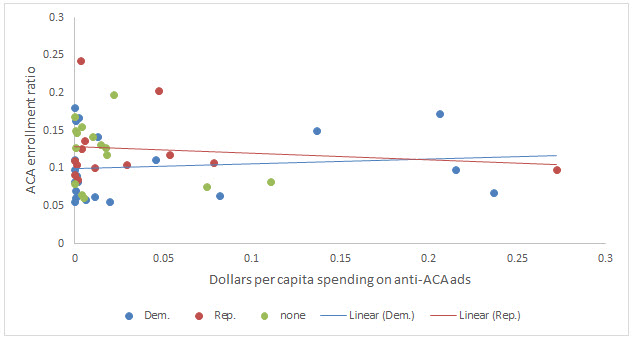 The four states with the highest per capita spending on anti-ACA ads are Kentucky, Arkansas, Louisiana, and North Carolina. Interestingly, in all of these four states, the midterm Senate elections are expected to be very competitive. Although the volume of spending on anti-ACA ads is driven by the competitiveness of the Senate midterm elections and may be effective in reducing the votes for the targeted political figure, they may not necessarily reduce the popularity of the ACA. The blue and red lines show the association between the anti-ACA ads spending and the ACA enrollment ratio in states with Democratic and Republican Senators running for re-election. While the negative ads reduce the enrollment in red states, they have an opposite effect in blue states.

In fact, after controlling for other state characteristics such as low per capita income population and average insurance premiums, I observe a positive association between the anti-ACA spending and ACA enrollment. This implies that anti-ACA ads may unintentionally increase the public awareness about the existence of a governmentally subsidized service and its benefits for the uninsured. On the other hand, an individual’s prediction about the chances of repealing the ACA may be associated with the volume of advertisements against it. In the states where more anti-ACA ads are aired, residents were on average more likely to believe that Congress will repeal the ACA in the near future. People who believe that subsidized health insurance may soon disappear could have a greater willingness to take advantage of this one time opportunity.

Ways to address the opioid crisis

What does economy-wide inflation mean for the prices of health care services (and vice versa)?