One month ago, the Partnership for Assessment of Readiness for College and Careers and Smarter Balanced Assessment Consortium, the two organizations charged with designing and administering the Common Core assessments started field-testing.  Approximately 4 million students from around the country will take the nearly finished exams.  The purpose of the trials is to test the tests.  Education leaders want to assess the quality of the test items to discover which ones are too easy and too difficult.  These field tests will also focus on discovering and fixing technical glitches.  Both Common Core assessments are taken on a computer rather than the traditional paper and pencil.  The field tests are essential to making sure testing goes smoothly next year when the test results will count towards compliance with accountability policies like teacher evaluations.

Technical difficulties represent a major threat to the long term success of the Common Core.  If the Common Core tests suffered a failed launch then it would present a potent moment for its political enemies to try and stop the implementation of the standards.  Online testing in Indiana, Kentucky, Minnesota, and Oklahoma from several test providers have encountered severe technical glitches in the past.  Students experienced slow loading times, the unexpected closing of test applications, and some were not even able to log into the exam.  Bugs like these have the potential to invalidate hundreds of thousands of test scores.  There is scant evidence on the status of the current Common Core field tests.  According to one report the Smarter Balance technical assistance hotline was averaging 637 calls a day while the PARCC helpline was averaging 1,100.  However, most of these issues were easily resolved.

There are three main technical hurdles the Common Core tests will need to overcome for a successful launch:

Ideally every student will take these next generation assessments on a computer.  Computer based tests are far preferable to paper based tests.  They are less expensive to administer, easier to grade, and more accurate.  Many schools have computer labs or other facilities suited to test students.  These schools can rotate students through the lab to take exams.  Some schools will have to bus students to libraries or universities to administer the tests.  Computers with viruses, antiquated hardware, or unpatched operating systems may run slow to a point that it interferes with the student taking the test.  Computer availability is a largely solvable problem for most communities.  However, administrators must have plans in place ahead of time to avoid costly delays.

The Common Core tests require Internet access.  In 2005 about 94 percent of schools were connected to the Internet and 97 percent of those used broadband services.  Since 2005, that percentage of schools with Internet access has likely approached but not reached 100 percent.  Internet service providers may throttle access, which could slow the tests and result in the loss of the answers to test items.  Schools without hi-speed access may not be able to administer the test at all.  This is especially problematic for rural areas that lack access to broadband Internet.  Students in these areas will either have to take a paper test or travel to a location with Internet access.

The area of greatest concern is glitches that the current field tests would miss.  Many of the problems with Healthcare.gov were not know until hundreds of thousands of people attempted to use the website at the same time.  It’s often difficult to anticipate these problems without rigorous testing.  The best data on the field tests came from the PARCC Live Field Test Updates.

These daily press releases provided a useful but incomplete data on the number of field tests, which were administered and completed.  The largest number of tests started on a given day was 55,000.  Students took tests over multiple days so the peak number of test takers was likely closer to around 80,000.  However, once the tests go live many hundreds of thousands will take the tests each day.  For example California has over 6,000,000 K-12 students.  On a test day the number of users could easily exceed 500,000.  The prospect of unknown glitches should worry test designers and the testing consortia. 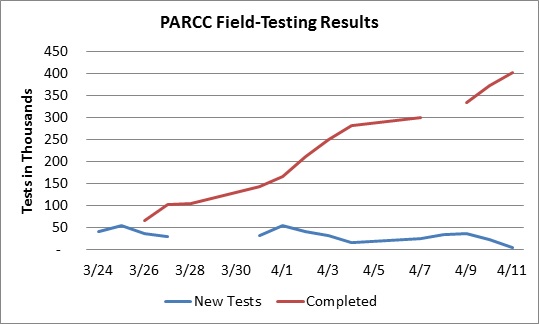 None of these problems should catch education leaders off guard.  Common Core cheer leaders and opponents would likely agree that implementation is the key to successful standards based reform.  A failure to address these technical issues would represent a serious blow to the Common Core because it would speak directly to the quality of the implementation effort.  If the Common Core is to stand a chance of improving the quality of the nation’s education system school leaders must plan to address these issues today to prevent a disastrous launch.

Ukraine and beyond: Lessons in refugee education

Connor Raso
Thursday, May 26, 2022
Get daily updates from Brookings