How do improvements in information and communications technology (ICT) affect governance?  Many have studied the role of the Internet in governance by state institutions.i  Others have researched how technology changes the way citizens make demands on governments and corporations.ii  A third area concerns the use of technology in countries where the government is weak or altogether missing.  In this case technology can fill, if only partially, the governance vacuum created by a fragile state.

In recent years, the digital revolution has expanded, both in terms of its reach and its complexity. Besides the Internet, several other technologies now affect governance well beyond the developed world. For example, Africa and Asia have the fastest mobile phone growth rates. By the end of this year, the number of mobile-connected devices will exceed the total global population. As a recent Pew Research report noted, “In a remarkably short period of time, internet and mobile technology have become a part of everyday life for some in the emerging and developing world. Cell phones, in particular, are almost omnipresent in many nations.” 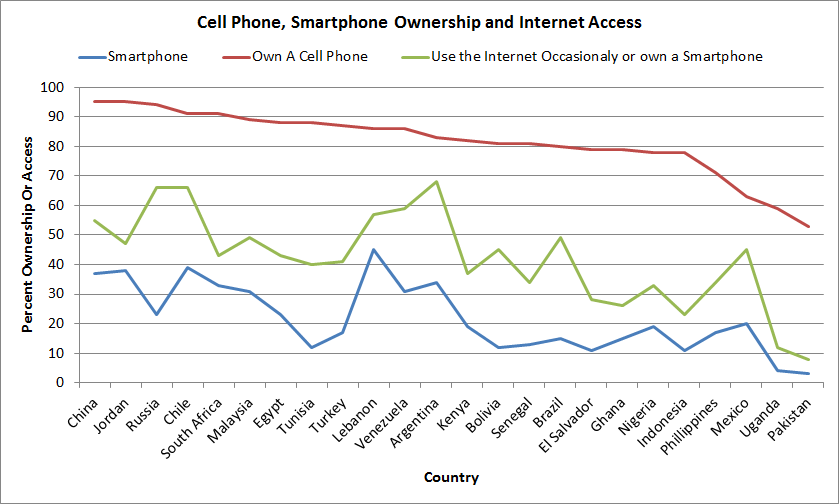 Predicting how this technological revolution will impact countries with weak governments like Somalia is difficult.  Technologies matter not because of the features or functions of any particular device or application, but rather because of the changes in information and communication costs associated with the nature of technology in a particular time and place.iii  An example can be found in the western world when looking at the differences between the late 20th century information environment and today.  The former was characterized by one-to-many broadcast media and difficult to scale print platforms. Communication was costly and required large, complex organizations, such as television networks.  Today’s information environment is characterized by instantaneous and scalable, many-to-many global data flows at zero marginal costs. This enables groups with few resources to organize initiatives intended to fill some vital need or make demands on inattentive states.

Filling the Governance Vacuum with Technology

When considering this process it is important to not get too caught up in any one technology or brand application.  The revolution may or may not be tweeted, but that is not the right question.  Filling governance vacuums involves numerous overlapping technologies used by a wide variety of actors to collect, process and distribute information.  For instance, high-resolution remote sensing satellite imagery from commercial vendors allows NGOs and other nonstate actors, including human rights, environmental organizations, and nuclear nonproliferation advocacy organizations to have access to affordable information resources that were, as late as 1999, the exclusive domain of a handful of superpowers.


It is also important to keep in mind that remote sensing data are dependent on the presence of other technologies, including geographical information systems, geospatial positioning satellites, high-speed computer processing, sub-sea fiber-optic cable systems and communication satellites.  Technology innovation centers are also important. Examples would include Benetech, Inveneo, Human Rights Data Analysis Group, iHub in Nairobi, and The Barn in Cape Town.  All share a passion to discover solutions to problems found where state institutes are weak or missing. If we conceptualize information as an environment then technology is neither a given species of tree nor a forest.  Instead, technologies create an entire information ecosystem.

Many assume the state is the sole source or expression of governance. One answer is to define governance as a government’s ability to make and enforce rules and to deliver services.iv Limiting the discussion of governance to a consideration of the nature and capacity of the state alone is problematic.  Doing so shuts the door on alternative conceptualizations of governance and to interesting and practical questions, especially questions about technology and governance.

Political scientist Thomas Risse has developed an alternative approach. Rather than thinking about “failed states,” we can conceptualize particular manifestations of governance shortfalls.

The lines between the dimensions of limited statehood blur and overlap with each other.  What might at first seem like a temporal break in a state’s governance capacity might, over time, morph into a territorial issue (having the quality of a slum or a refugee camp) that remains in place for years, or even decades.  These places can, over time, also take on a socio-cultural limited statehood quality, where refugees face systematic discrimination in the provision of collective goods.

Besides this multidimensional take on the nature of limited statehood, this way of thinking about governance doesn’t assume that the state is the only source or expression of governance.  For the purpose of analysis, governance must remain conceptually independent of statehood.  There are in fact several “governance modalities.”  The state itself is a rather modern phenomenon.vii   Even now, as much as 80 percent of the world’s population experiences or is exposed to areas of limited statehood.viii  In many parts of the world, public goods, and even binding rules, are provided – if they are provided at all — by alternative governance modalities.

Part one of a three part series on ICT and governance.  Stay tuned to Techtank for more and read Part 2 here and Part 3.


Dr. Steven Livingston is professor of Media and International Affairs at The George Washington University.  Among his more recent publications are Bits and Atoms: Information and Communication Technology in Areas of Limited Statehood (Gregor Walter-Drop co-editor) and Africa’s Information Revolution: Implications for Crime, Policing, and Citizen Security.