Paid leave for parents is likely to be an important issue on the campaign trail this year. Hillary Clinton, positioning herself as the candidate on the side of families, argues for all parents to be paid for 12 weeks of family leave, at two-thirds of their salary up to a (so far unspecified) cap. Donald Trump has not so far ruled it out, simply saying: “We have to keep our country very competitive, so you have to be careful of it.”

Polls routinely show high levels of general support for paid leave across the political spectrum. But there are many nuances here, including how to fund the leave entitlement, how long the leave should be, and whether fathers and mothers ought to get the same treatment.

Some light can be thrown on these questions by an analysis of the American Family Survey conducted earlier this year by Deseret News and the Center for the Study of Elections and Democracy (disclosure: I am an adviser to the pollsters).

Views differ over the optimum length of leave depending on whether it is for the mother or father, and whether it is paid or unpaid: 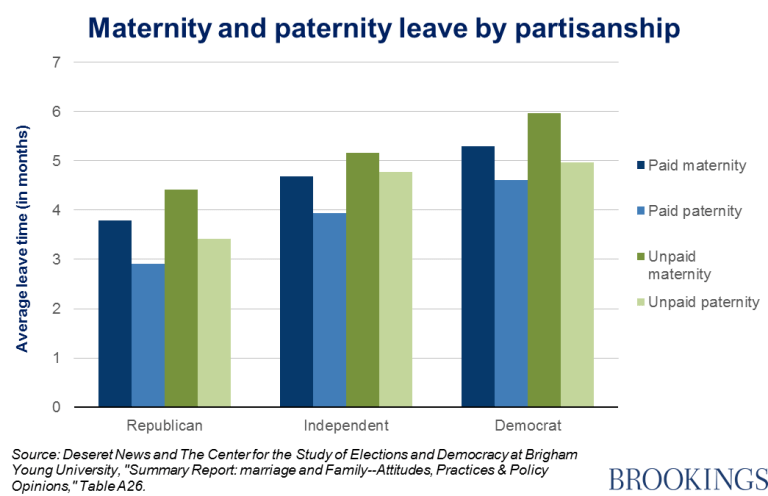 But even Republicans are quite supportive, backing almost four months of paid leave for mothers and three months for fathers. So on the face of it, Clinton’s plan should be a vote winner even among moderate Republicans.

More for mom than dad? Depends how you ask the question

There are important implications about gender roles here. Encouraging men to take paid leave is important not only for the quality of family life, but also for gender equality more generally. Attitudes towards the role of fathers are shifting, although the primacy of motherhood remains. Among every ideological group there was greater support for longer maternity than paternity leave. It is worth noting, however, that half the respondents supported equal leave for mothers and fathers; the variation is driven by those in the other half, who drew a distinction by gender.

It turns out that the order in which the question is asked also makes a difference. For half the respondents, the question about maternity leave came before the one on paternity leave. For the other half, the questions were asked in the opposite order. (Because of the design of the survey, respondents could not change their previous answer.) The ordering of the question had an influence on responses: 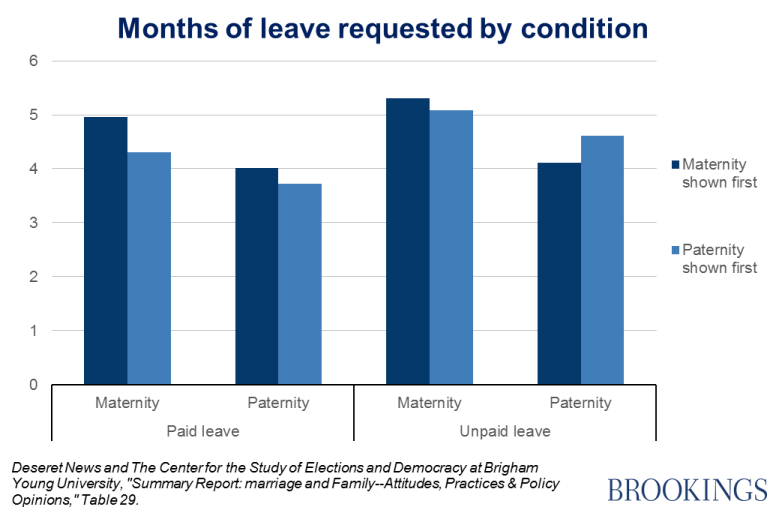 Among those who gave an answer on paternity leave first, the gap between the preferred length of leave for mothers and fathers was much less. This was especially true for unpaid leave.

When people think about paid parental leave, many may think automatically of a mother, just as they think of a man when asked to picture a “strong leader.” Asking about maternity leave first goes with the traditional cultural grain, and results in more support for mothers compared to fathers. Asking about paternity leave first interrupts the normal gender framing, and narrows the gap.

There has been a slow revolution in attitudes towards the respective roles of mothers and fathers, reflected in the strongly symmetrical attitudes towards maternity and paternity leave in this survey. But there is more work to do. Mothers and fathers both need help balancing paid work and family life. Let’s hope this can be at least one area of agreement between Clinton and Trump.

The Hamilton Project: 2021 in figures