“A society of equals is a society in which disadvantages do not cluster,” say Jonathan Wolff and Avner de-Shalit in their book Disadvantage. Low income matters greatly in itself, of course. But it also matters because it brings other difficulties along with it, like poor health and/or a lack of health insurance. An important goal of policy is to “de-cluster” these disadvantages.

Increased health insurance coverage has had a modest impact on access

In recent years, the State of Colorado, embracing and going beyond the Affordable Care Act, has increased health insurance coverage, especially among low-income residents. Between 2009 and 2015, the proportion of Coloradans with annual family incomes below $30,000 who were uninsured fell from one in four to one in ten.

Clearly this is good news. But the expansion of insurance has so far had a modest impact on healthcare utilization, at least according to the Colorado Health Access Survey. The Survey includes questions such as, “Have you visited a health care professional or health care facility in the past 12 months?,” and “Was there any time that you did not get doctor care that you needed because of cost?” On these and similar questions, there was relatively little change between 2009 and 2015.

Why didn’t improved health insurance coverage lead to increased use of health care resources? It may be that the survey questions simply aren’t capturing improvements in utilization rates. A more detailed study of the ACA expansion in Oregon did find an increase in utilization, along with improvements on a number of financial hardship indicators. The Colorado survey does seem to suggest financial improvement: the share of low-income white residents that reported trouble paying medical bills fell by just over 3 percentage points from 2009 to 2015; for minority residents the figure was just over 6 percentage points. It’s hard to know, however, how much of this trend is driven by the stronger economy, and how much is driven by the ACA expansion. It is also possible that people are now able to access more appropriate care, for instance using primary care, rather than resorting to the emergency room.

Utilization rates have clearly increased in one area, however: dental health. Medicaid covers dental care for children, so Colorado’s Medicaid expansion increased the number of children in the state with government-sponsored dental insurance. In 2014, Colorado also became one of the few states to introduce limited adult dental coverage. As a result of these policy reforms, the share of low-income Coloradans with insurance for dental care has increased sharply: 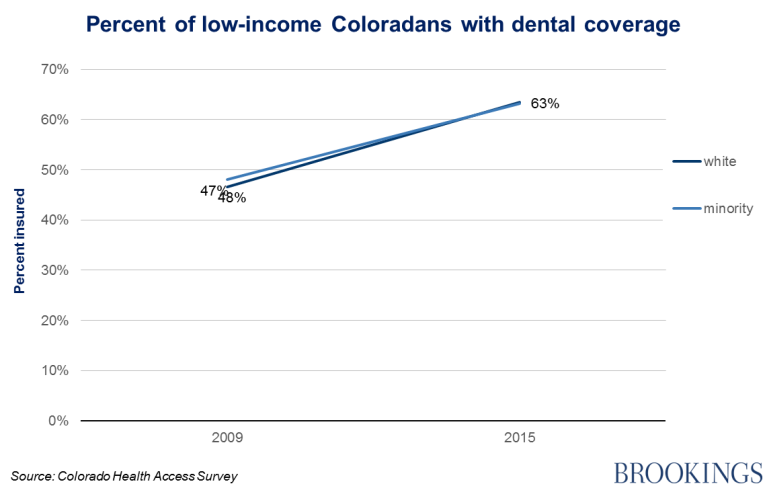 Over the same time period, the proportion of low-income Coloradans who visited a dentist—especially minorities—increased, too: 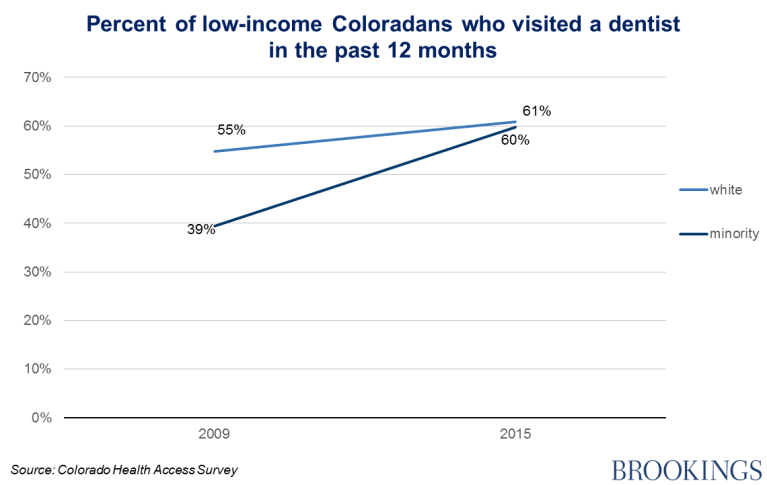 Dentistry is an important part of the health care system, and dental disease is a serious health issue. Four in ten poor Americans suffer from untreated tooth decay, according to some researchers. Better dental care helps low-income people in a range of ways, from avoiding emergency rooms, to having healthier pregnancies, and even succeeding in the job market. The dramatic improvements in dental coverage and dental care in Colorado show that the connection between policy reforms and improved quality of life can sometimes be quite straightforward.