There is an encouraging message from a new paper by Sean Reardon and Ximena Portilla: school readiness gaps are narrowing. But it’s not all good news.

Between 1998 and 2010, inequality in school readiness—in terms of math, reading, and behavior—declined quite significantly, according to Reardon and Portilla’s analysis of ECLS data, being presented today at the Association for Public Policy Analysis and Management Annual Conference. This positive trend can be seen for gaps in both income and race (or at least, for Hispanic-white differences).

Given that school readiness strongly predicts later academic outcomes, these findings bode well for social mobility. They also suggest that other research from Reardon showing worsening gaps in K-12 and post-secondary education (at least by income) cannot simply be explained by what is happening in the early years.

But there are two big caveats. First, the narrowing of the gap in recent years comes after a significant widening in the two decades prior. As Reardon and Portilla put it, “at the rates the gaps declined in the last 12 years, it will take another 60-110 years for them to be completely eliminated.”

Second, progress in terms of closing race gaps is uneven. While Hispanic-white differentials in school readiness have narrowed, the black-white gap has shown much less movement. Take the size of gaps in math scores in the years 1998, 2006, and 2010: 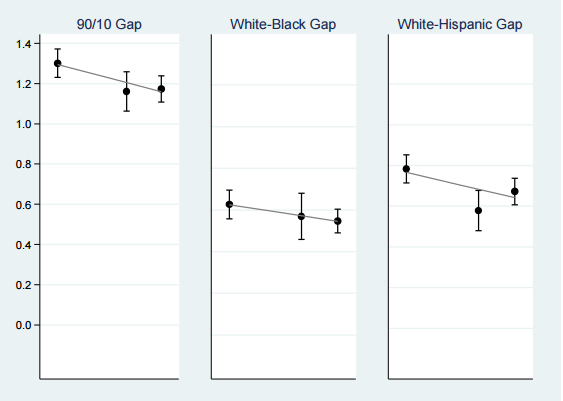 The narrowing of the income gap and between whites and Hispanics is statistically significant at the 0.05 level. Not so for the black-white gap: “The income and white-Hispanic school readiness gaps declined significantly, while the white-black gap declined less (and not at a rate distinguishable from zero at conventional levels of significance).

Why is the black-white school readiness gap so stubborn?

One possibility is that kindergarten is not such an effective equalizer for black children, or has not improved as much on this front. There is some evidence from Reardon and Portilla’s paper here. Between the fall and spring of the kindergarten year, gaps in math narrow between rich and poor kids, and between white and Hispanic ones. But they actually widen slightly between black and white kindergartners (although from a narrower start), for both the 1998 and 2010 cohorts: 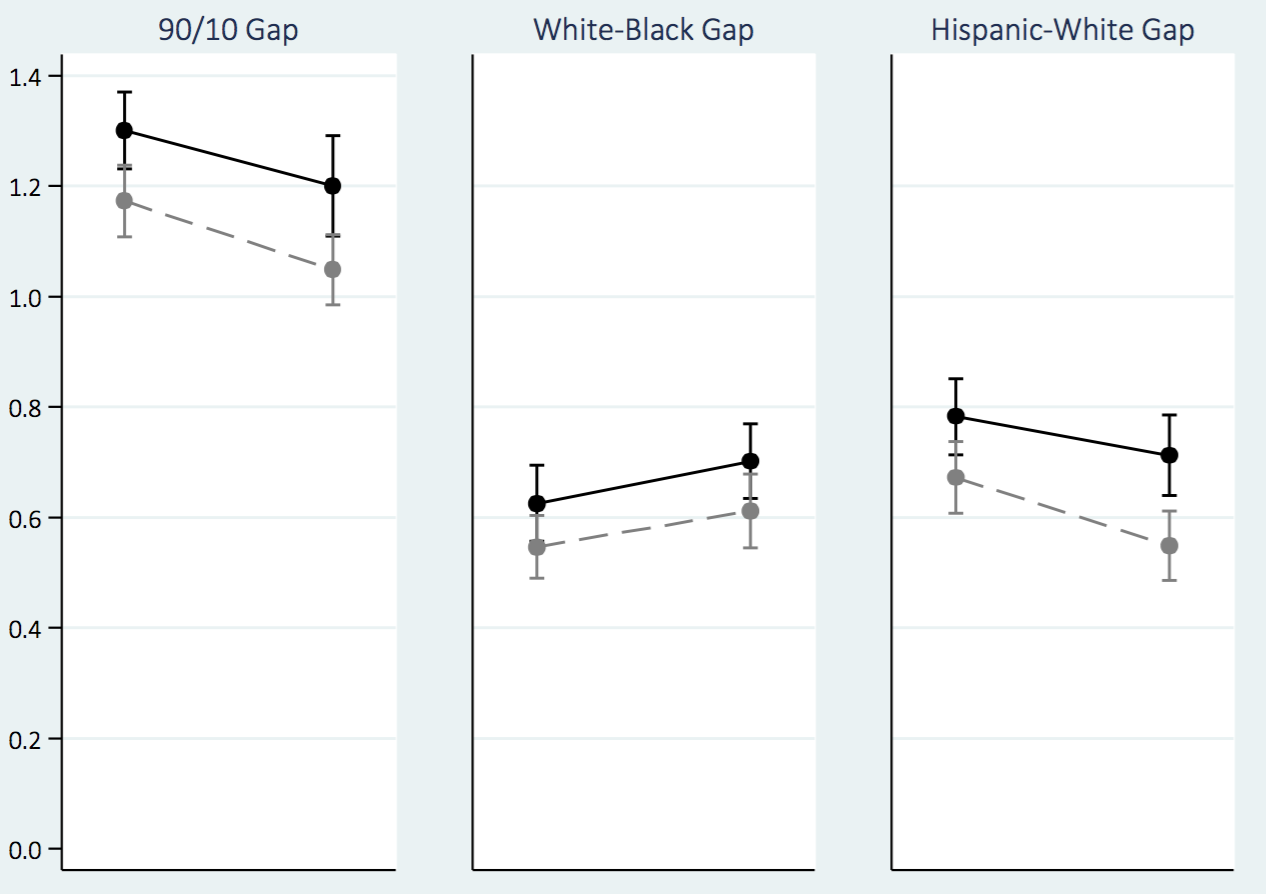 Source: Reardon and Portilla, 2015. Gaps in math scores in standard deviations for the fall and spring of kindergarten. Solid line for the 1998 cohort; dashed line for 2010.

These findings echo studies suggesting there are race gaps in the quality of experience in early education. It also looks as if rates of pre-school enrollment have risen less rapidly for black children in recent years than for low-income and Hispanic children (though from a high base).

Another chapter, then, in the depressing story of contemporary racial inequalities in America. On household income, child poverty, intergenerational mobility, incarceration, neighborhood poverty, employment, even in in terms of starting school, too many black Americans are being left behind.